What was I thinking?! 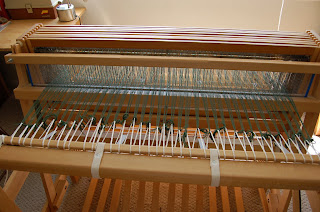 I got my dummy warp on and lashed it to the apron rod to check for errors, which, of course, I found. I've been wondering about lashing on versus tying on, but because the dummy warp was so short, lashing on was my only option. What a chore. The dummy warp, which you can see in the heddles, needs to be attached to the handspun warp with an over overhand knot. Dummy warp is so believably tedious and not for the faint of heart - it has to be coaxed through the reed and then again through the heddles. I kept reminding myself of how much handspun I was not wasting. 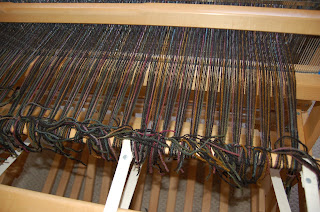 I finally got my warp tied on but there were so many interludes. Theresa loaned me a warping video that came with her Louet loom - oh yeah - watching it gave me loom envy, big time. I do appreciate the warping information however. I needed to watch it again before tying onto the apron rod. It was so helpful - I finally felt like I knew what I was doing. 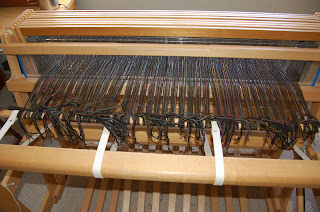 I flagged in the proofing and ended having to change a third of the warp in the heddles and then re-sley it. I am having the third of my favorite beers. It was a nasty job. 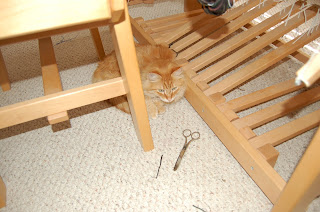 And where was my weaver's appren-
tice? Actually he was on the floor next to the scissors that he batted off my bench. He is very helpful.
Posted by Sharon at 5:05 PM

It looks like you have it all under control to me!!!!

Oh Sharon, I've never done a dummy warp but I can relate to the tedium of it. It will all be a faint memory when that beautiful handspun startsturning into something wonderfully woven. What's the favorite beer? Local brew?

Talk about loom envy!! Just the fact that you're doing something with yours makes me envious... did I say that? Thats one of those unforgivable sins isnt it? Oh well, I'll just have to get over it :)
BUT I really wish I had a good place to set up my loom. My 'room' is so packed with 'stuff' that my loom is sitting here next to me by the computer all folded up and frowning at me everytime I sit down here. I look at it a heave a heavy sign then look away thinking, "someday, we're going to get to know each other"

Sharon,
I like using a dummy warp only if I'm going to weave the same pattern a couple of times. Your's looks good to me. What are you making?

Your helper didn't want to sit on the scissors.

I've never used a dummy warp. Actually I never thought that one would put on just a dummy warp....instead one would just use the loom waste from a previous warp.

You deserve those beers! Have one for me!

Mmmm. Beer and weaving, it's a perfect pair!

Every time I click on your blog and see that header I start laughing. That cat makes me *so* happy.

Look at it this way - you'd have had to do all the same stuff with the "real" warp. This way, you're not abrading the real thing pulling it in and out of heddles, etc. It's a learning experience. I ALWAYS have to fix at least one mistake, so don't feel bad. The last one was in the middle, so had to re-do half of it, and I didn't have any beer to console me!!

Hang in there - I'm with Theresa... You'll be loving it when you actually start weaving.

Your dummy warp doesn't have to be of the same material you are using to weave with. You could use a strong cotton skinnier than your handspun. The real warp and the dummy warp don't have to be related in any way. It can be scraps of leftovers in a bunch of weights. It is just a place holder and extra length. If you are going to use the same threading for a bunch of projects you can make a rather long dummy warp and then just keep tying onto it (It gets a bit shorter every time you cut off the knots). I often just tie onto whatever was left from the last project.

I can see from here that your handspun is seriously gorgeous yarn!!! The finished product is sure to be fabulous!

I also appreciate that you're giving us the nitty gritty struggle through the dummy warp. I've never tried one. I'm glad to see I'm not the only one who struggles....even though of course I wouldn't wish struggles on any one!!

Your looms seem to activate your cat....meanwhile my loom makes Bailey want to sleep! Maybe that's the difference between cats and dogs?

Congrats on your weaving. I've only woven on small looms. I really like the beers and cat as weaving aids!