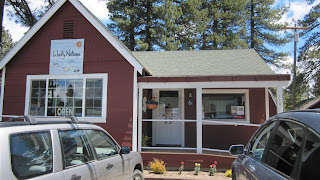 I called and she said she'd love to see them - we'd talked about them when I was in the development stages. Here is her darling shop in one of the old lumber-company buildings that are the backbone of the town's character. Because of the golf courses, this has become a mecca for retirees and also a perfect opportunity for a cottage yarn store. She bought six kits! She asked me if I'd take a check. Let me think about it. You know I didn't say that. I said - YES! 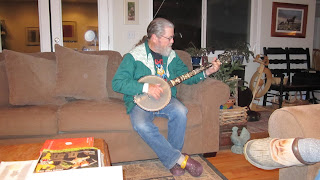 Petey is a claw hammer banjo player and we've been watching Pete Seeger Rainbow Quest episodes on Netflix the past couple of nights. I've played guitar since high school so he was showing me how the banjo is tuned and then I twisted his arm into playing for us. He participates in a lot of big name festivals, and actually works at the one in Telluride. He forfeits Strawberry to spend that weekend with us at our Gathering. Yikes. 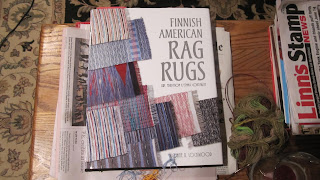 I finished the placemats just after Petey got here and so he com-
mented that he remembered his aunt in Michigan having a giant loom and weaving rag rugs. Something we didn't know. Petey is Finnish - first American born on his father's side, his mother was born here. While I was in town yesterday, he browsed through the book and found his aunt Jean Kangas mentioned throughout. 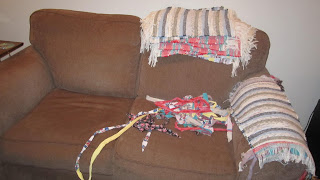 I've been tying fringe every spare moment I get. I'm down the the last few mats. I think it takes more time to tie the fringe than it does to weave the mat. I'm starting to feel relief that I'll make the deadline and still have time to read the book (that I haven't started) for the library book club I facilitate next Tuesday.

I have the soap ready to take in tomorrow but a trip to town is an automatic list of tasks, so I'll go to JC Paper and get laser paper for more soap labels and Sierra Chemical for another 50 pounds of lye. Man, I wish they'd sell it in smaller increments. That's some seriously toxic stuff but you can't make soap without it.
Posted by Sharon at 10:17 PM

Ask Petey if he'd like a good pasty (rhymes with fast) from the U.P.?

There's a cure for that fringe...whip up a hem on the sewing machine. So much easier on the hands.

Must go finish my book group book for this afternoon. Yikes...

Personally, I prefer hemstitching on my placemats. I leave a tail (usually about 4 times the width) and do four rows of tabby with the carpet warp. I just tuck the carpet warp in when I'm ready to start my rags. It sure does take less time, and it looks nice, too. Congrats on the kit sale!

The area around you has so many interesting places to visit. Great that you have already sold kits! It is really difficult to buy lye at all around here, it used be in grocery and hardware stores - no longer.

I am so excited about the hat kits! You will have to let us know if any sell. Your hats are wonderful.