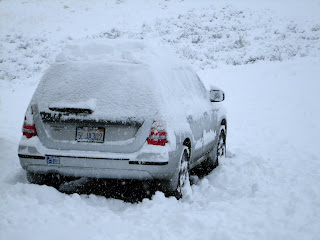 We didn't have to drive 20 miles for Noah to play in the snow yesterday. The snow came to us last night in a freak and unpredicted storm. This car wasn't going to San Francisco today. 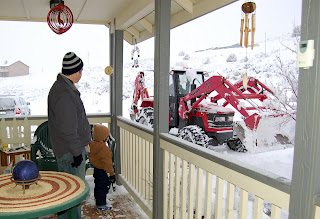 The first order of business was to get the driveway plowed. What more could a four-year old boy ask for? 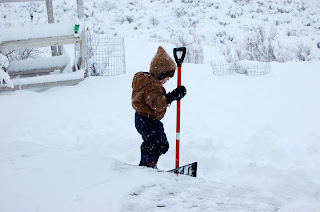 Papa shoveled snow all morning and Noah itched to shovel snow too. At first he pushed snow from the deck with this gloves. 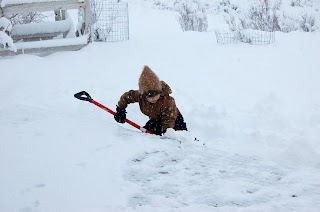 He needed a shovel and he got one. He spent the next house cheerfully shoveling snow. With some direction, he cleared about 2" from the back deck. 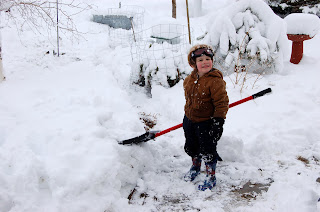 I don't look that cheerful when I shovel snow. After more than two hours, we managed to get him back in the house to dry out his clothes. As soon as they were dry, he was ready to go back out. 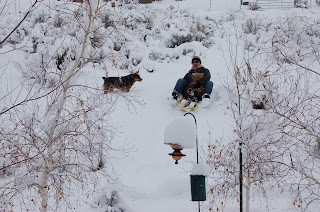 There was so much snow, so so much snow. They got in one last sled run. Buster has never seen sledding before. 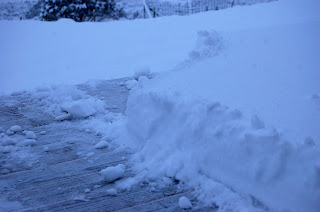 This is shoveling first thing this morning and it continued to snow all day. Noah got his first snow experience in spades.
Posted by Sharon at 8:44 PM

I am thrilled that Noah got to see more snow. What a happy little kid. I remember being so excited when I was that young too. The dryer was my friend when it snowed. When the clothes were dried, that meant we could hit the snow again. My mom thought we were going to freeze to death. At least when we did, we could have a frozen smile on our faces. Pretty cool for kids from Texas to see NY snow.

With a name like Noah, good thing this kid didn't want to see rain!!

That storm came all the way across the midwest. We stayed ahead of it coming home from Chicago. Am headed out now to shovel and blow the driveway clear.

Hey, we're getting that storm now! What good luck for Noah, but I doubt he'd be that cheerful about shoveling if he had to do it all the time!

I am glad to know we're not the only ones getting snow. I'm just bummed as I actually saw a blade of green grass on my way to the barn this weekend! Of course, it was in a path I had kept shoveled open so maybe that's not really "fair". heeheehee

I am so glad Noah got to have some snow experience. I can just imagine how happy and jazzed he was!

How nice for a freak snow storm to make lots of shoveling fun for Noah! (And nice for him to remind us that shoveling can be fun sometimes.)

Our snow is melting fast right now....I'm wondering if I'll see bare ground by the end of the week. I can hope!

I suppose we're supposed to get it too... I hope not lol Im so happy to see the sun!

Happy to see we weren't the only ones who got a good snow storm this winter.

Glad to see Noah have so much fun!!

Whoa!! We were supposed to get 6" and got rain. It looks like we swapped weather. Noah will have to tell all his friends about the snow he got to shovel. And you might want to keep these pictures for when he comes to those teen years to show him he actually enjoyed manual labor when he was just a wee thing. :)

Such a fun day! There's nothing like playing in the cold snow, coming inside with frozen fingers, getting on warm clothes and having a warm cup of hot chocolate!