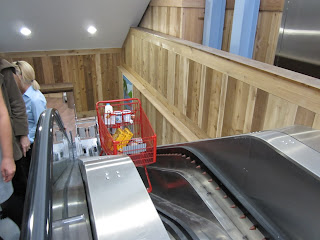 Tuesday was my birthday - the "real" Columbus Day. I had planned to visit the Museum of Art and Design but then had second thoughts. We had already seen two museums and I kind of wanted to "do" something rather than "see" something. We popped into the new Trader Joes that just opened up three weeks ago across from the 72nd Street subway stop, "our" stop. It's entirely underground. How do you get your grocery cart from the bottom level up to check out? With a grocery cart escalator! 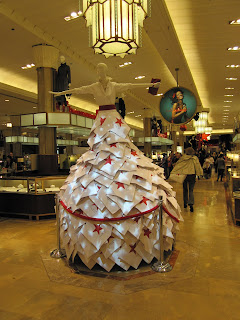 We took the subway down to Herald Square and visited Macy's where I had a celebratory Octoberfest ale from a local brewery in Macy's cellar pub. If you buy nothing more than an ale in the basement, Macy's is still a must see. And of course, there was a Columbus Day sale in progress. We eat our major meals at noon when we're here so celebrated my birthday at a nearby Asian fusion restaurant called Shang Hai Mung. It was even better than last year! 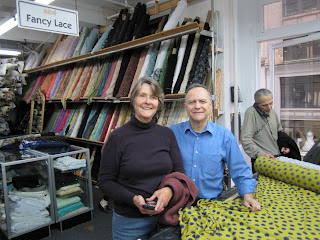 I decided that my birthday treat should be a visit to Mood, the designer fabric store featured on Project Runway. Ian took a picture of me with my cutter, who helped me wrangle those monster bolts of fabric. I bought four pieces of fabric last year and decided on five this time. 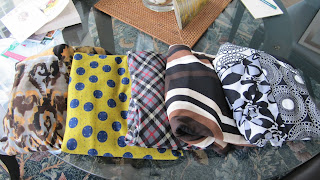 These are my choices and it didn't take me long to find them. In fact, I found too many and these are just in the knit jerseys. And no, I didn't get to pet their dog - I didn't see him. No one could be more surprised than I am that I've suddenly rediscovered the joy of sewing my own clothing.
And, no, I won't be visiting any yarn stores here because my LYS is Jimmy Beans. Their remodel should be completed by the time we get back. I'll stick with my homies. 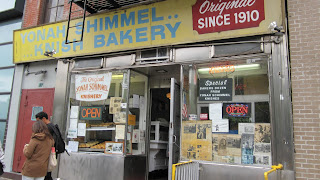 Jumping ahead to today, we took the subway though multiple changes to get to east Houston street, pronounced How-stun, and is the "ho" in Soho, which means south of Houston. Our destination is Yonah Shimmel's. Note the sign says "original since 1910." That's modest since this is the first knish bakery in the United States. And they are in an original tenement building. The bathroom door has so many coats of paint on it that it cannot fit into the door jam but shuts by use of hook and eye. 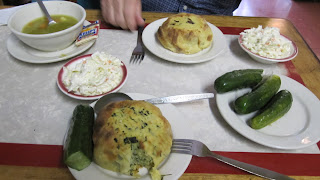 The knish came here with Russian Jewish immi-
grants around 1900 and the name comes from the Russian word knysh, which means a type of bun - I looked it up on my phone while we were there. They couldn't have known 100 years ago that their peasant food of cabbage and potatoes would our quest food.
This is our lunch and there's nothing like it where we live. We think they use a little horseradish in the coleslaw dressing. The half-sour pickles aren't available at home either. 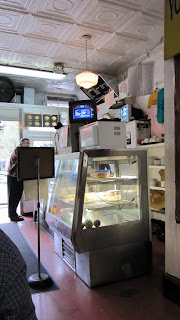 I'm having a hard time editing what to show because New York is so fascinating that I can't stop taking pictures. I'm going to stick with this 100-year-old eatery for today. The shop is only as wide as you saw in my first photo. Seating are picnic tables, like ribs from the walls, and passage in between. This is the service counter, note that two TVs are going on two different channels. Also note the original tin ceiling. The walls are covered in photos, one with the owner, Larry David (Seinfeld writer) and Woody Allen. Each picnic table has a diary and pen to enter your comments in. I can't resist reading what others say: My parents came here on their first date; you call this a knish?; my rabbi told me about you; I'm back from Pittsburgh - miss me?; and so on. 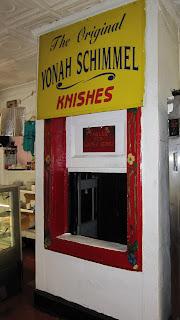 There is only room on the main floor for the service counter and five picnic tables. The actual cooking is done in the basement and then comes up on this hand-operated dumb waiter. It also serves as an intercom, as the service counter employee yells down to the cooks and we hear echos of reply. I chuckled at the menu footnote: Note to Tourist - Tax & Tip not included - help send the waiter to Florida - Tip Big.
Posted by Sharon at 4:29 PM

Happy belated birthday! I love the way you celebrated - a personalized special day. I'm amazed that you didn't spend hours and hours over your fabric choices. I know I would have!

Happy birthday, and many years in good health. (is some sort of translation what we say when someone has her/his birthday)
That fabric store looks like heaven LOL. I ecpecially like the second one on the right. And the first one......
The knish story is great.

Happy Birthday Sharon.....my grandson's birthday is the same day!
Looks like you are having marvelous time.....

Happy Birthday. You got some beautiful fabrics at Mood, the dogs name is....dang, I forgot it again. Swatch! A little Boston Terrier. Very cute. Maybe you should go back for more fabric and to pet the dog? ;)
Don't forget to have some real NY bagels. Just can't get bagels anywhere like the ones in NYC.
And remember, Birthday week is perfectly acceptable.

Happy Birthday! It sounds like you're have a brilliant holiday. Can't go wrong with a birthday trip to a cool fabric store like that! I'd have to admit that if I ever got to NY, I'd want to visit the Met and Cloisters.

A very happy birthday to you ;-)
Looks like you had a wonderful day with alot of great tasting food. Sounds perfect!

How fun to folow your day and take in the pictures.Happy birthday.I remember rye bread .Have not gotten that this side of the Atlantic.Of cource I see you can celebrate Columbus day,but Leif Erikson really was the first lol.Is there such a day though?

You make New York sound as cool as an European city. More and more I'm think we need to visit the place one day.

And I can hardly wait to see what you make out of your fabric. I love the colors and patterns.

I am truly impressed that you got to go to Mood. I am a huge Project Runway fan. I think I watch every episode twice. Was it as cool as it looks on the show?? Wonder how much business they have picked up because of the show?
Let me add my Happy Belated Birthday to the mix! Have a great trip and safe journey home.

Late, I know, but still: happy birthday Sharon!
And I love your stories about your trip to New York!

HAPPY belated BIRTHDAY to you, Sharon!