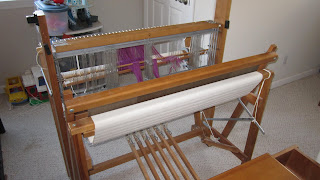 I had Ian help me move Goldie out of the dormer and into the guest room this morning. After two days of rain, I'm having that cozy-up-by-the-fire feeling. It's time to get weaving! I talked to my friend Linda, who moved to Washington earlier this year, shortly before we went on vacation. Their short-sell house had been approved for their purchase and she had gotten her Artisat out of storage and was weaving samples from Marguerite Davidson's book. 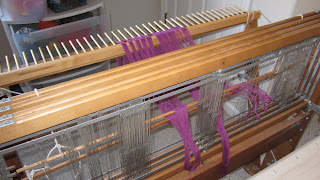 Using the same book, I've chosen Berta Frey's Rosepath Sampler using the #2 treadling. I should get 16 samples, so the warp is 10" wide and I'll weave 5" of each sample, changing colors. After Valerie's comment yesterday, I realized that I still don't have a handle on how colors work together in weaving - it's much different than in knitting. I plan to cut the samples in half so I can wet finish one half. I'm really excited. 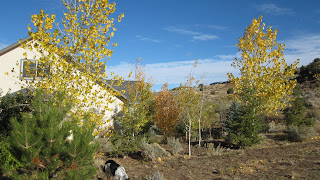 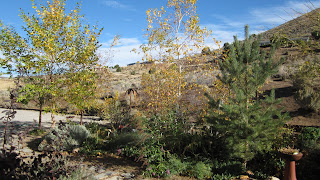 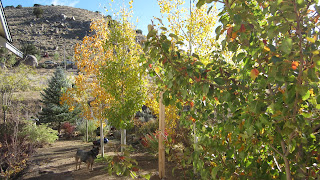 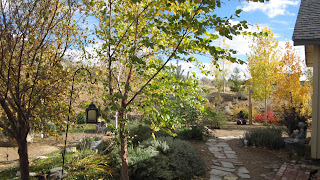 I really like Benita's idea to take a picture a week from the same location to document the changes in the season where you live, so I went outside and took these four - more sampling! I liked the first one because it was comprehensive but it would be a bear to get to in deep snow. I just realized that. The third location would also be bad in snow and I think the aspens alone don't snow (Freudian slip?) enough. It's between two and four, both different ends of the same space and close to the front door. Anyone care to help me out here? Benita is going to tell me how to assemble the images in a video at the end of the year.
Posted by Sharon at 5:55 PM

I like the 4th one, between the two. The second one doesn't have the color range that the fourth does. Beautiful :)

All beautiful shots Sharon, at least you have trees that change color. I suppose I could photograph a rock. It would be either wet, dry or covered with snow. And let me tell you about snow, we've got it, am sending your way. Weaving weather has certainly started here!

Have fun sampling. I've been weaving a lot. Must post soon....when the wet finishing is done.

Leigh said...
This comment has been removed by the author.
5:55 AM

"Weaving Season." Hmm. It sounds like you're throwing down the gauntlet!

I love Benita's idea too and have been stumped on that one spot to photograph. However, thanks to you, I think I'm going to pick a sampling of places, and do all of them!

P.S. Sorry for the double comment, but I had to correct a serious typo!

The golden aspens look beautiful against the grey/brown backdrop.
I would luv to learn how to weave someday but it the set up looks complicated and with 5 spinning wheels I wouldn't have the room for a big loom.

I am learning to weave, and I need to slow down and do allot of sampling myself. I want to jump in with both feet and just start making stuff, but after years of knitting, spinning, and dyeing, I know that is not the best way to really learn the craft. And who says samples that really turn out can't be sewn into pincushions, little makeup bags, etc? I wish I had more patience. . .

Nice pictures. Welcome back. glad to see you had a good time.

What a great idea for a photo project! I always love seeing the seasons of Nevada through your photos, Sharon.

I like the 4th one the best - there's a lot going on in that picture that will change at different times over the course of a year.

Next week starts weaving season for me and I can hardly wait. One day of cleaning and reorganizing the studio then it's off to learn doubleweave and see how much of my stash I can get woven up.