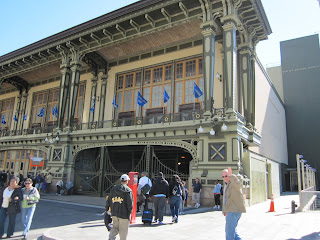 Today is the last day to tour Governor's Island for this season. We took the subway down to Battery Park and then walked to the Battery Maritime Building to catch the free ferry to the island. The island ownership is part National Park Service and part New York City. 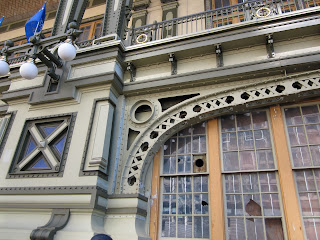 I absolutely fell in love with the Beaux Arts architec-
ture and the steel, cast iron and stucco elements. Because it's just the ferry building and gateway to the main event, i.e., Governor's Island, I wasn't able to find anything about it until we got back tonight. Poor Ian. I didn't bring a computer and have commandeered this laptop. 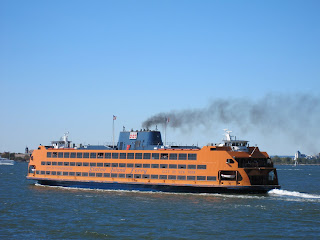 There are three ferry buildings in a row - Ellis Island, Staten Island and then our's. This is the Staten Island ferry pulling away from its berth as we begin our crossing. Staten Island is one of the five boroughs that comprise New York. 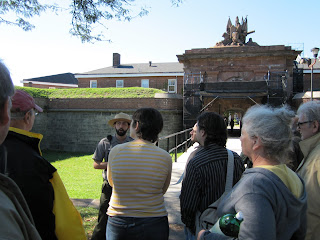 We took the 45 minute National Park Service ranger-led tour, and let me tell you that it was worth waiting for. We're in front of the sally gate to Ft. Jay and he's telling us about how the island was fortified, a player in the Revolutionary War as well as the War of 1812. Ft. Jay is akin to St. Augustine, Ft. McHenry or Dolphin Island, all five point fortifications, if you've ever seen any of them. The sculpture is original to the gate and a little worse for wear - the eagle is missing a wing. 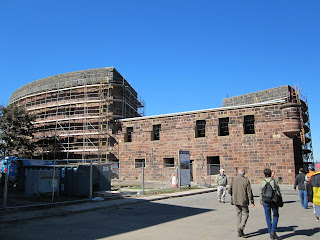 The second National Monument on the island and last on the tour is Castle Williams. It's been many things in its existence, from a Civil War penitentiary to childrens' classrooms. As you can see by the scaffolding, it's being repurposed again. 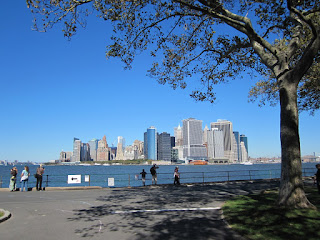 From here you can look back at the south end of Manhattan and see Battery Park, Castle Clinton and the three ferry buildings. 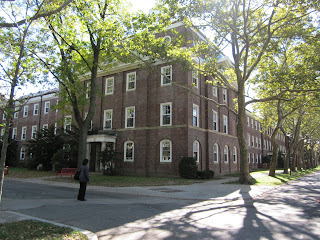 The military structures are reminis-
cent of a college campus. I heard that comment often today. Much of the early 20th century architecture is attributed to McKim, Mead and White. I am rabid about historical architecture so was lapping this all up. This building was a barracks for 2,000 enlisted men, one of the largest constructed in the US. 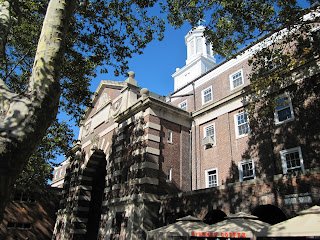 This is the central point of the monster barracks and the only way from one side to the other for a huge walk - we know this! So much going on, including SCA reenactments. I won't show you trapeze set-up for interning high-wire artists, the active Catholic church, or the colonial housing that the Coast Guard lived in until they closed the post in the 1994. You must come. Really. 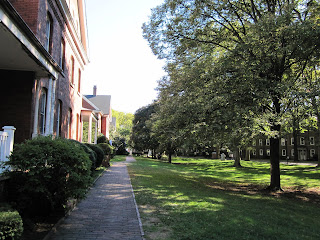 This is the layout - officers quarters on the left and enlisted barracks on the right with the parade ground in between. All of the buildings are in stages of being repurposed. The first permanent tenant, a maritime charter high school is now in session. The island is evolving and not well advertised. Ian stumbled across it as we got ready for this trip. 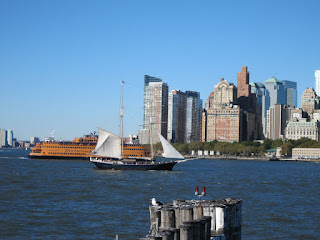 Returning on the ferry, I couldn't resist this image of historic and modern vessels, passing one another. I apologize for this overlong blog, It's really two subjects -the ferry and the island - both about architectural history. Thumping head - isn't that New York? 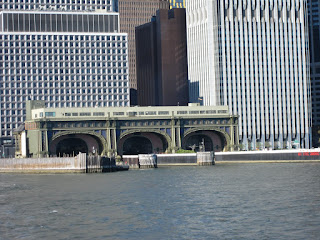 I absolutely love this building, and just so you know - I have a Smith-
sonian poster in my bathroom of traditional architectural styles, and you know that I'm the only one who has one. I'm reining myself in the best that I can. 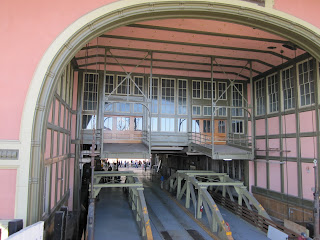 Our ferry is docked, and if you take this ferry, you must watch the actual physical act of docking. We are directed through what you see as car crossings. However, if you look above, you will see the platforms that were lowered to original ferries. The historic waiting room and ferry loading were from the second story. David Byrne from Talking Heads staged a concert from the second level.
We finished this day with Indian food and a surprising visit with our Indian waiter, Columbia engineering student. I felt like I had walked into a Jhumpi Lahiri short story. Way to kick off a NYC visit!
Posted by Sharon at 5:30 PM

Your excitement and enthusiasm is palpable through your post . I DO want to go to Governor's Island someday; my near ancestors all came through there, I suppose!

I wish someday you could take a spin up my way when you are in NY.
This is a great time to visit though.....October is a great month.

I get it about the architecture... I love old buildings. i just don't know the names for the different types like you do!

Thanks for sharing the great photos and information! You sound like you are having a great time!

Looks like your trip is off to a great start!!! Hope you're having an extra special day today and that you have a wonderful year!! (That's what I usually say in a birthday card!)

Looking forward to reading about the rest of your adventures in NY!!

"...from a Civil War penitentiary to childrens' classrooms..."

I started to say that is some extremes in repurposing, but on the other hand I can see where there could be similarities in the designs.

What a delightful tour. The pictures you are taking are amazing.

New York City is only about an 8 hour drive from where I live in Ontario. I really hope to visit one day soon.

Thanks for the tour!!!