On the Loom Again 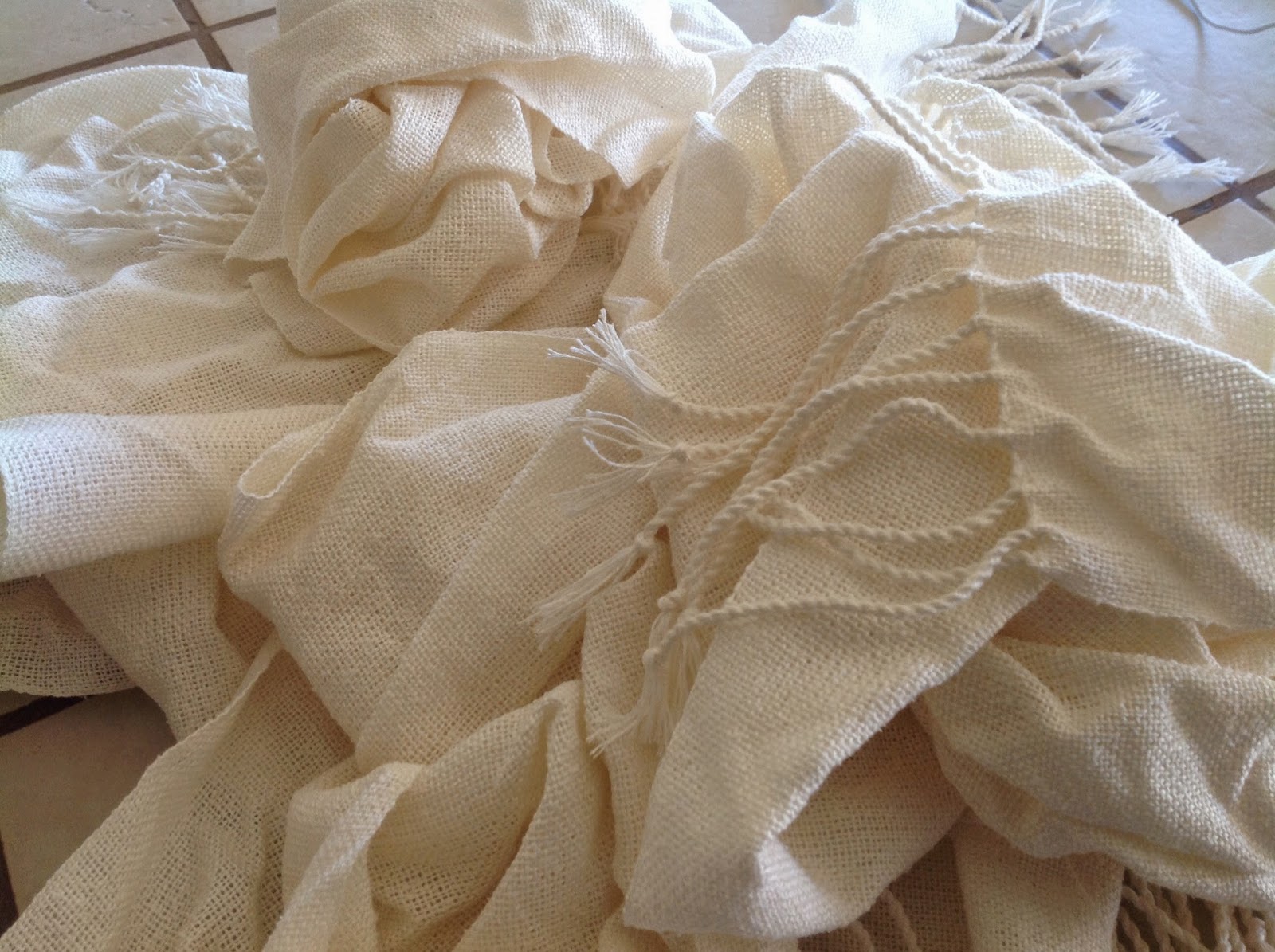 I finished the scarves and didn't enjoy weaving them one bit - just plain weave and not at all interesting. I'm very low on stock for the craft fair this weekend and know that I need inventory to attract people to my booth.  I'm getting ready to throw them in the washer but at this stage they look like medical gauze to me. 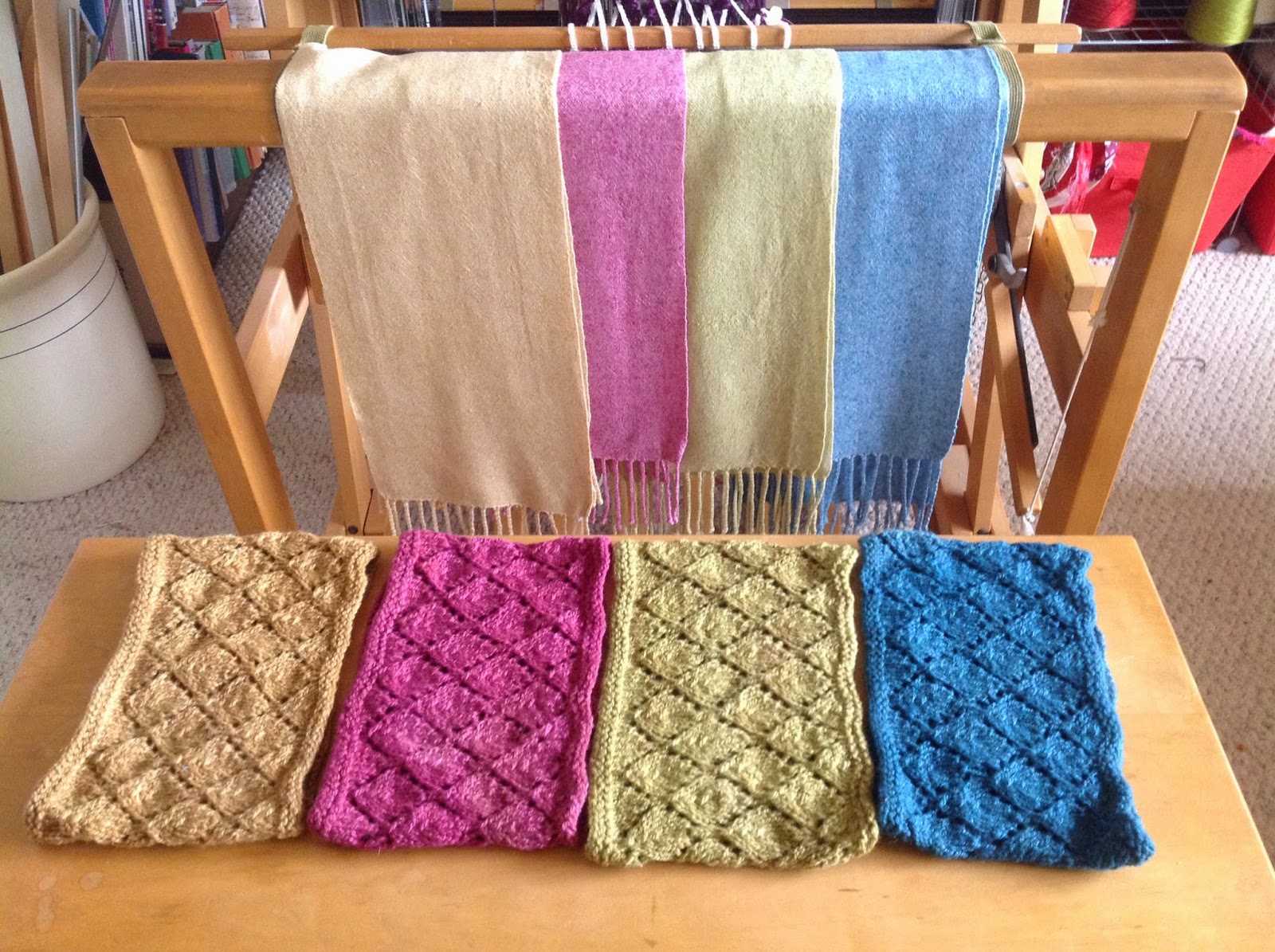 The scarves have done well for me in the past and they certainly are pretty when all finished.  I took advantage of the dye pots and dyed four of the cowls my daughter has ordered.  She would like each one to be a different color.  Three more to go! 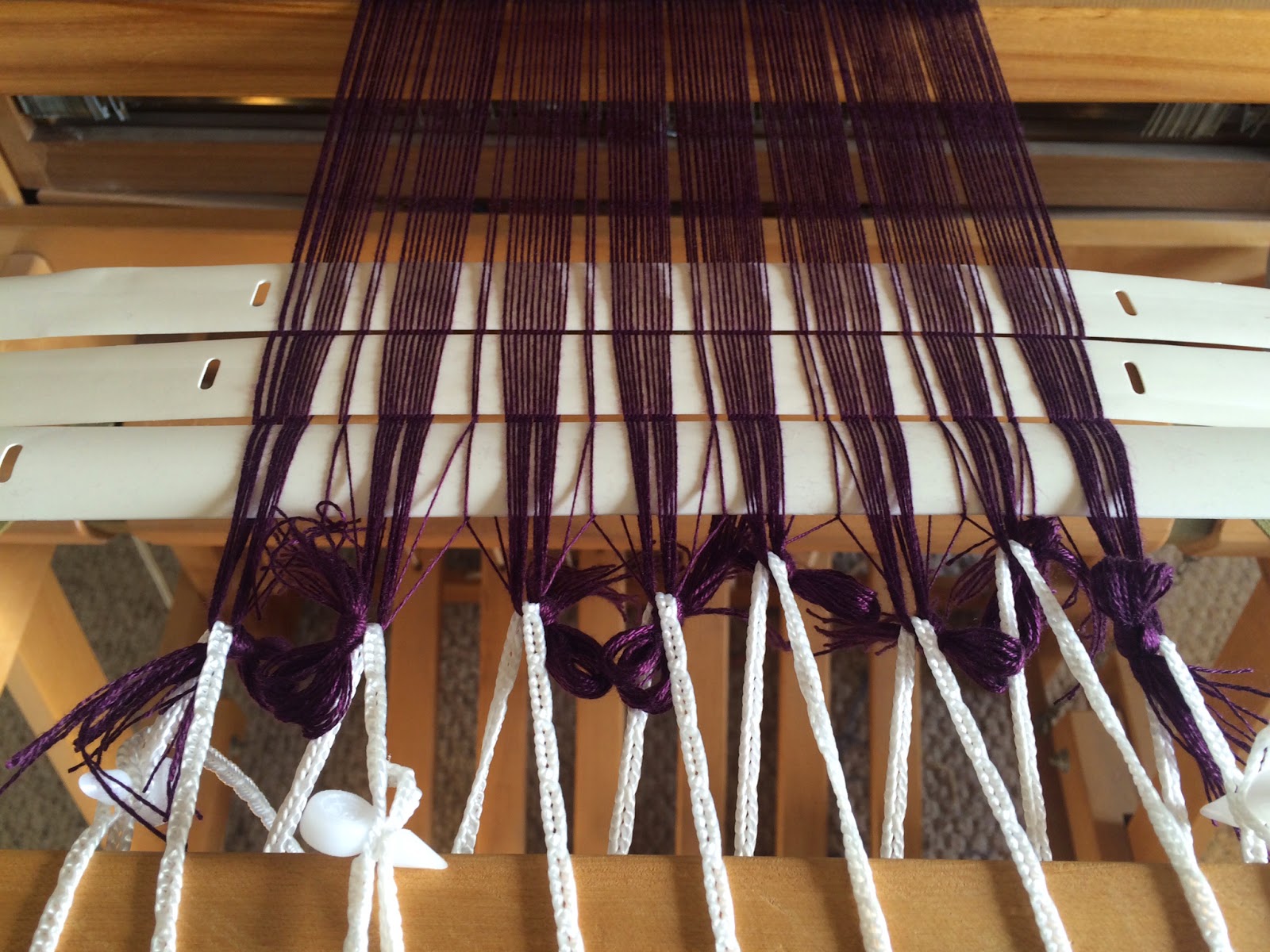 I haven't put a warp on since early October.  I originally used a draft that's been floating around 4-Shaft Weaving, broken twill with basket-weave selvedges.  I hadn't woven very far when I realized that I hated the basket weave, tore it out and rethreaded the edge threads for more broken twill.  I use the blinds to help me check for errors and there were many.  I love lashing on with Texsolv because you simply pop off the pin, fix the error and put the pin right back in place.  The piece I used wasn't quite wide enough so instead of cutting more Texsolv, I just added another short piece by pinning them together.  Worked great! 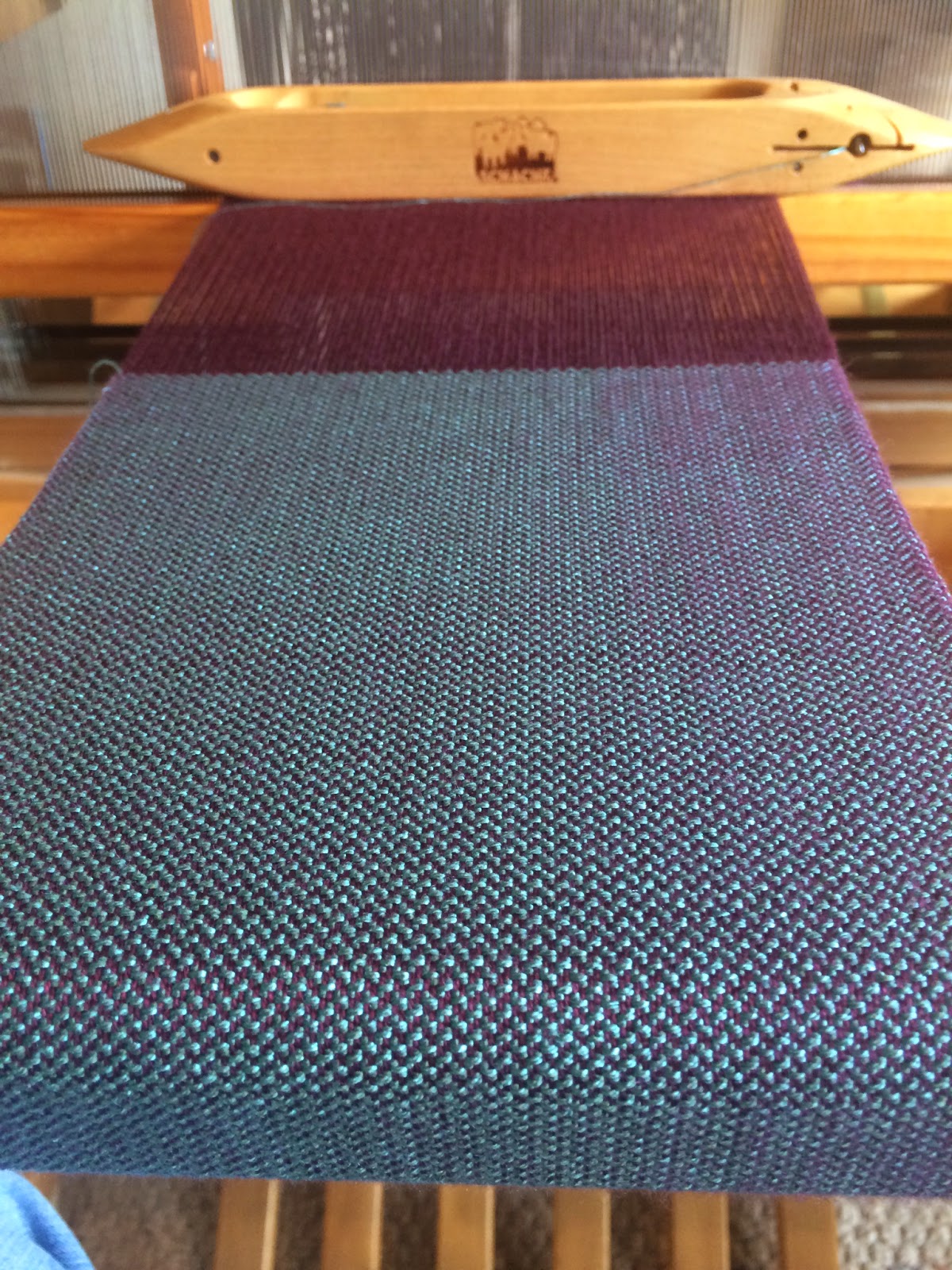 I have finally been able to start a project using the information from my recent workshop.  I chose broken twill because I liked it best of my samples.  I know that dark yarns like this deep purple are processed within an nth of their lives.  Changing the warp at the beginning caused some fraying which shows up in this fabric. 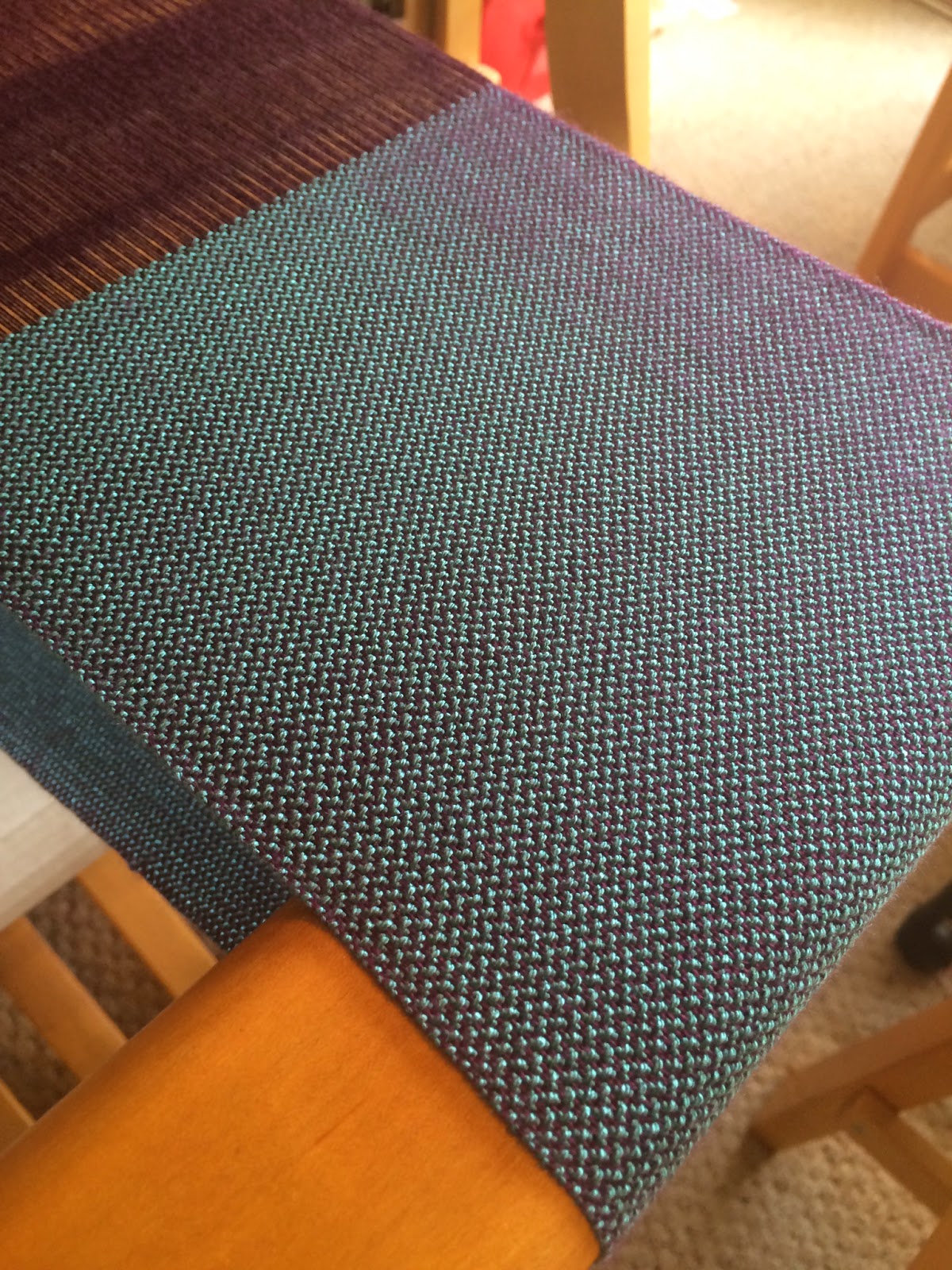 In addition the heddle eyes are abrading the yarn and that's also showing up in the cloth.  I thought I had made a treadling error and when I tried to correct it, discovered the only thing wrong was the lint and frayed yarn had piled up, producing a stripe across the cloth - very visible but I doubt I would have become aware of this problem had I sampled. 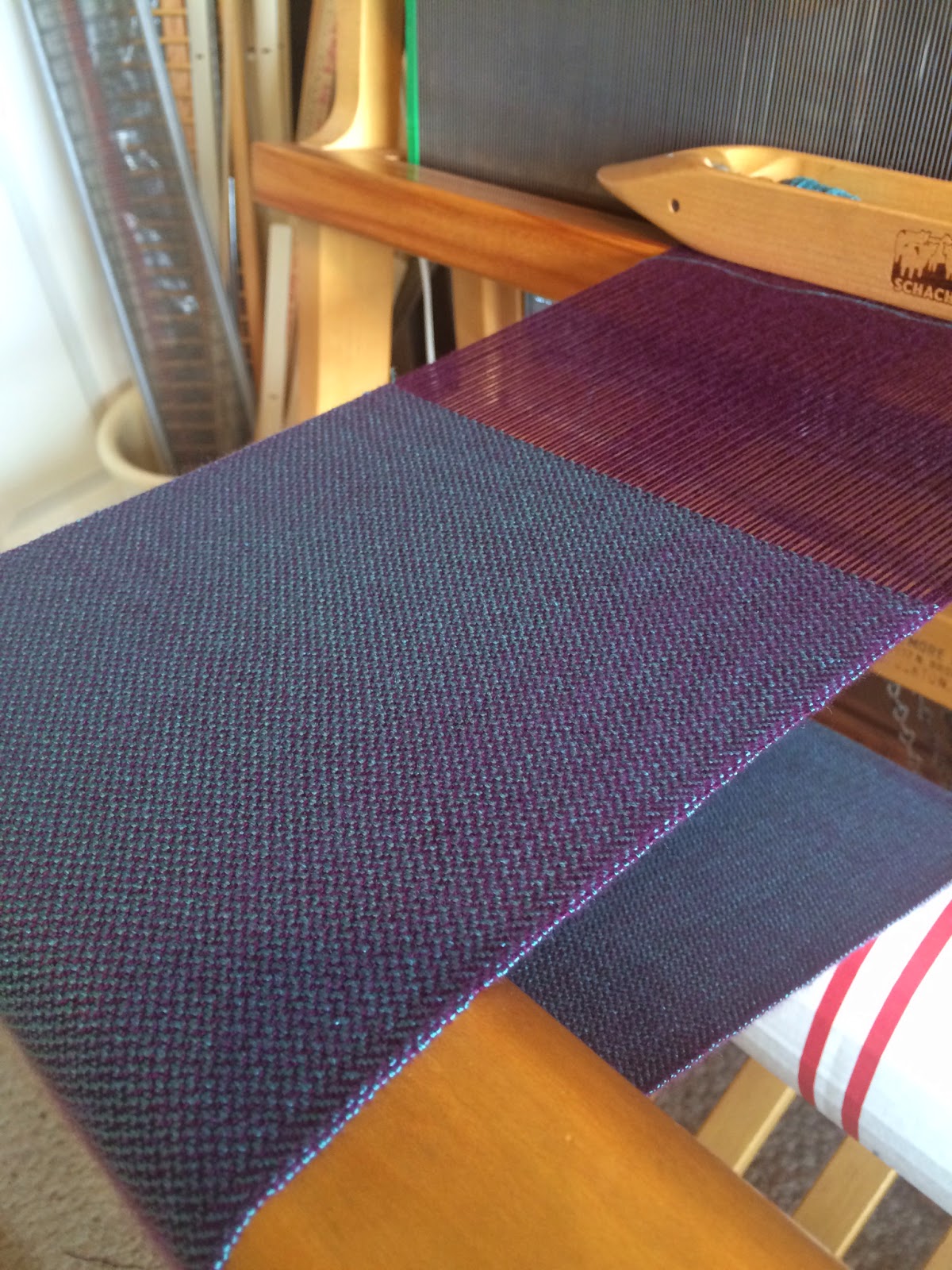 I'm fascinated by the color play.  Is it teal or is it purple??  I'm going to weave these two again, but this time I'll use the teal as the warp and try the Walls of Troy draft.  Broken twill really isn't that interesting or fun to weave.  Meanwhile, I've tied up two more harnesses on my big loom, added heddles to the harnesses and am getting ready to start on 6-shaft Huck Lace.
Posted by Sharon at 11:42 AM 3 comments:

Some Catching Up to Do 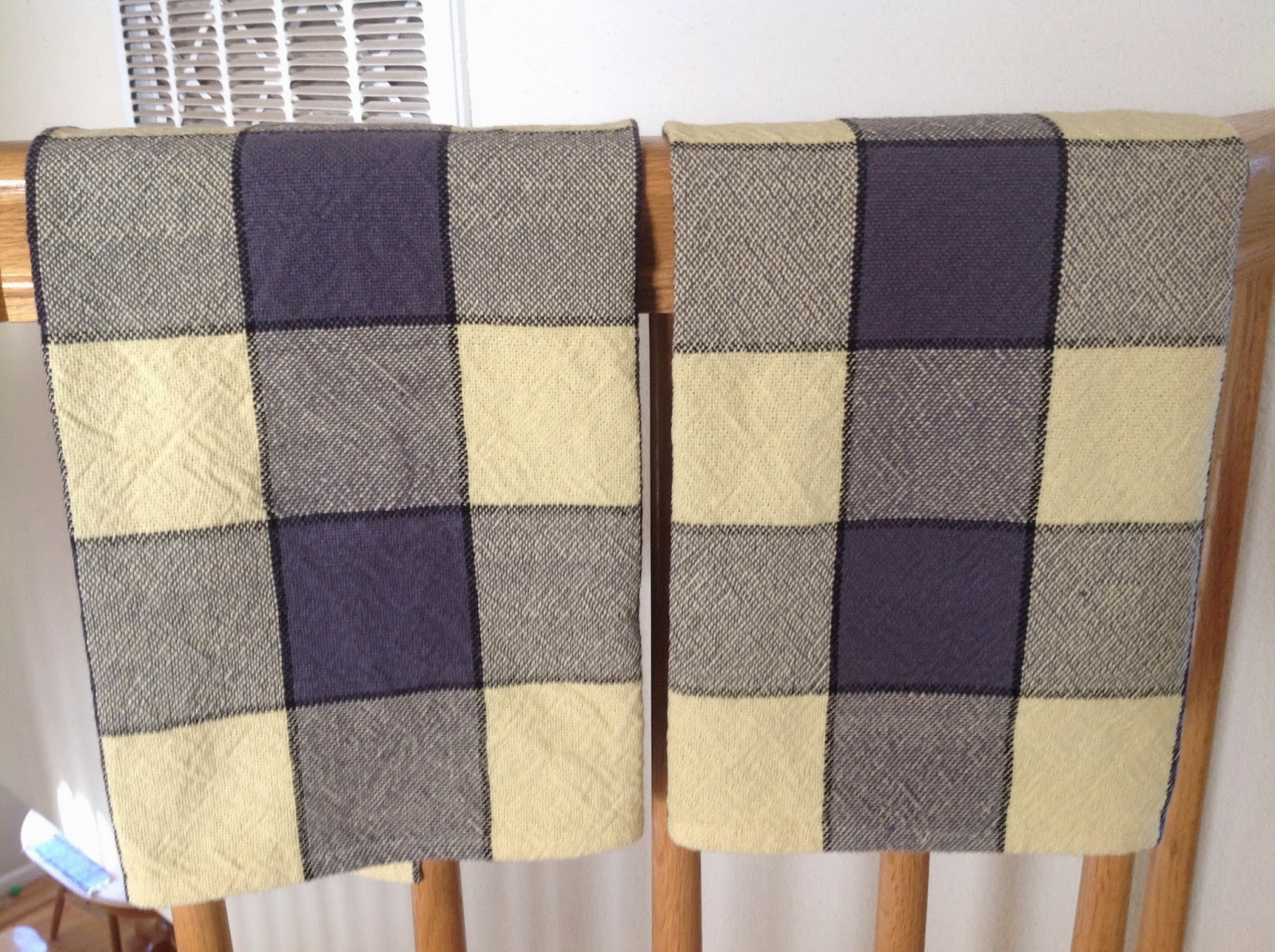 I finished the dishtowels and got them in the mail last weekend, though I was racing around like a mad woman trying to get them shipped before I left for my book club.  I'm happy with them, especially with the tracking in this plain weave - not happy enough to weave this fiddly pattern again though. 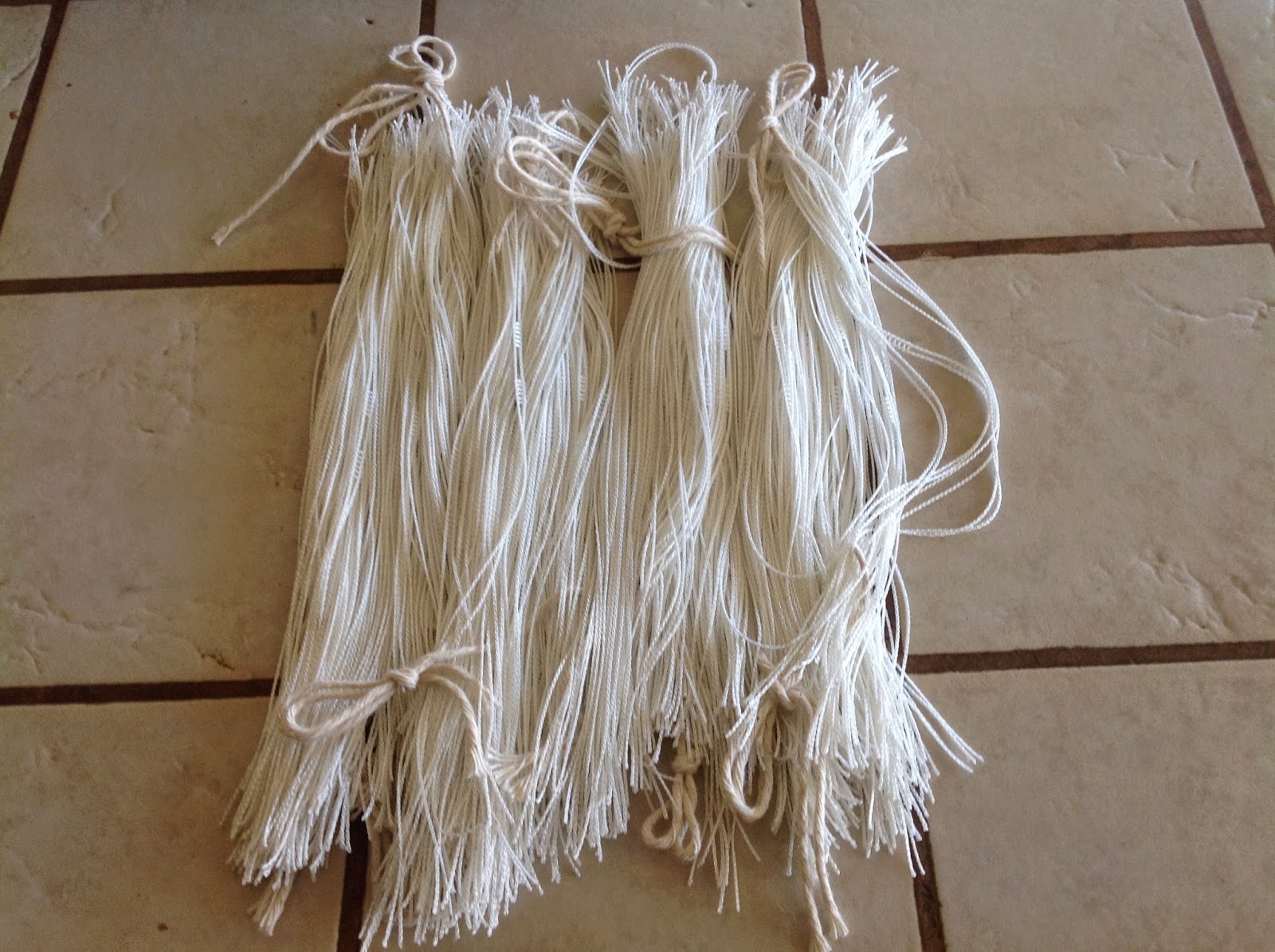 I received an email on Sunday from a blog reader in Florida, asking me to clarify why I didn't like the Texsolv heddles on my Dorset.  She also has a Dorset and had been thinking about changing her heddles to the Texsolv.  I learned when I visited Gayle that there are two generations of Dorset studio looms.  The first, which mine is, was made from a light wood and is a very light and portable loom, also why I needed heavier heddles.  Gayle has the second generation Dorset and it's very heavy. I explained this in my email response and then offered her mine.  No one in my guild could put this size to use and I had planned to offer them in a blog post, but she beat me to the punch.  I dropped them in the mail Monday on my way to work. 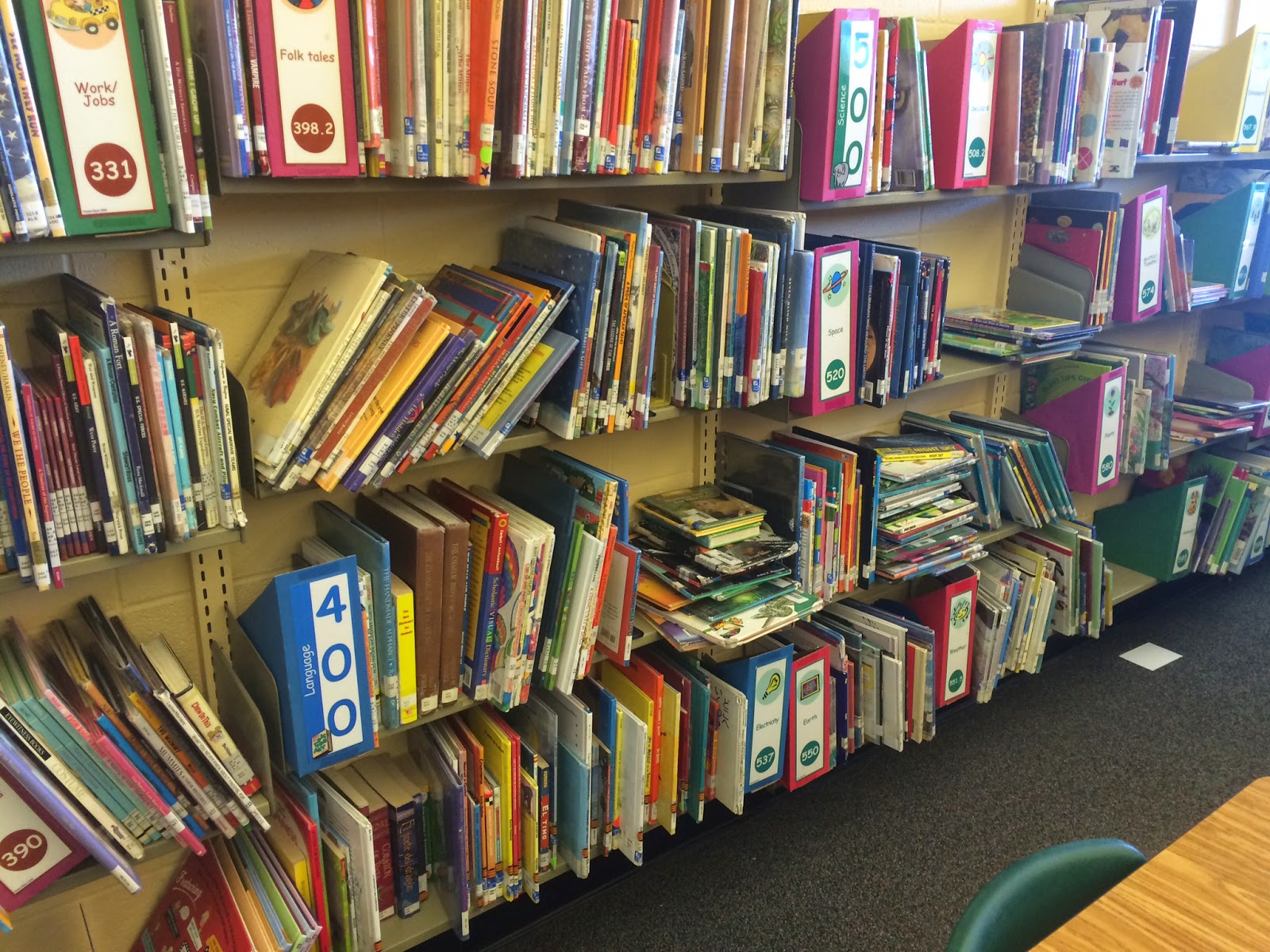 I had been called to sub last week for a librarian who was in the middle of a family crisis and when she called me from California Sunday evening it sounded like she was also in the middle of a personal meltdown.  She didn't leave lesson plans and while trying to explain her schedule to me, she let me know that the library was a mess.  "The books are flat - flat on the shelves."  And indeed they were. 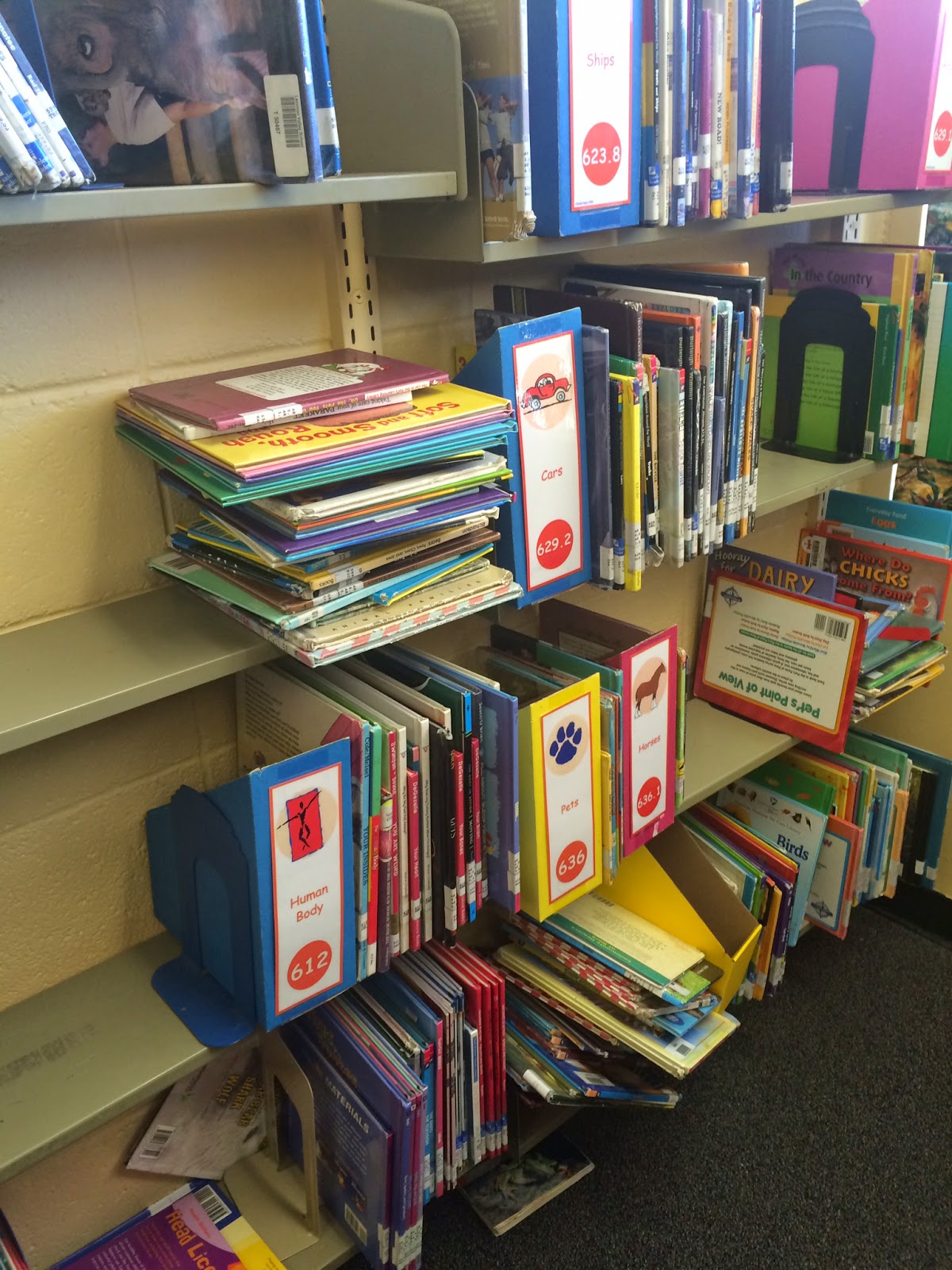 I have never seen anything like this and don't quite understand how this happened.  For one thing, her narrow shelving is probably original to the school library which is 50 years old this year.  I had my work cut out for me and managed to wrestle it into shape in between class visits.  Friday she had seven class visits as well as a lunchroom duty.  I have no idea how she has time to run a library.  When I turned the lights out and closed the door, I had managed to shelve all but one row on a shelving cart and the books were sorted and in order.  It was the best I could do. 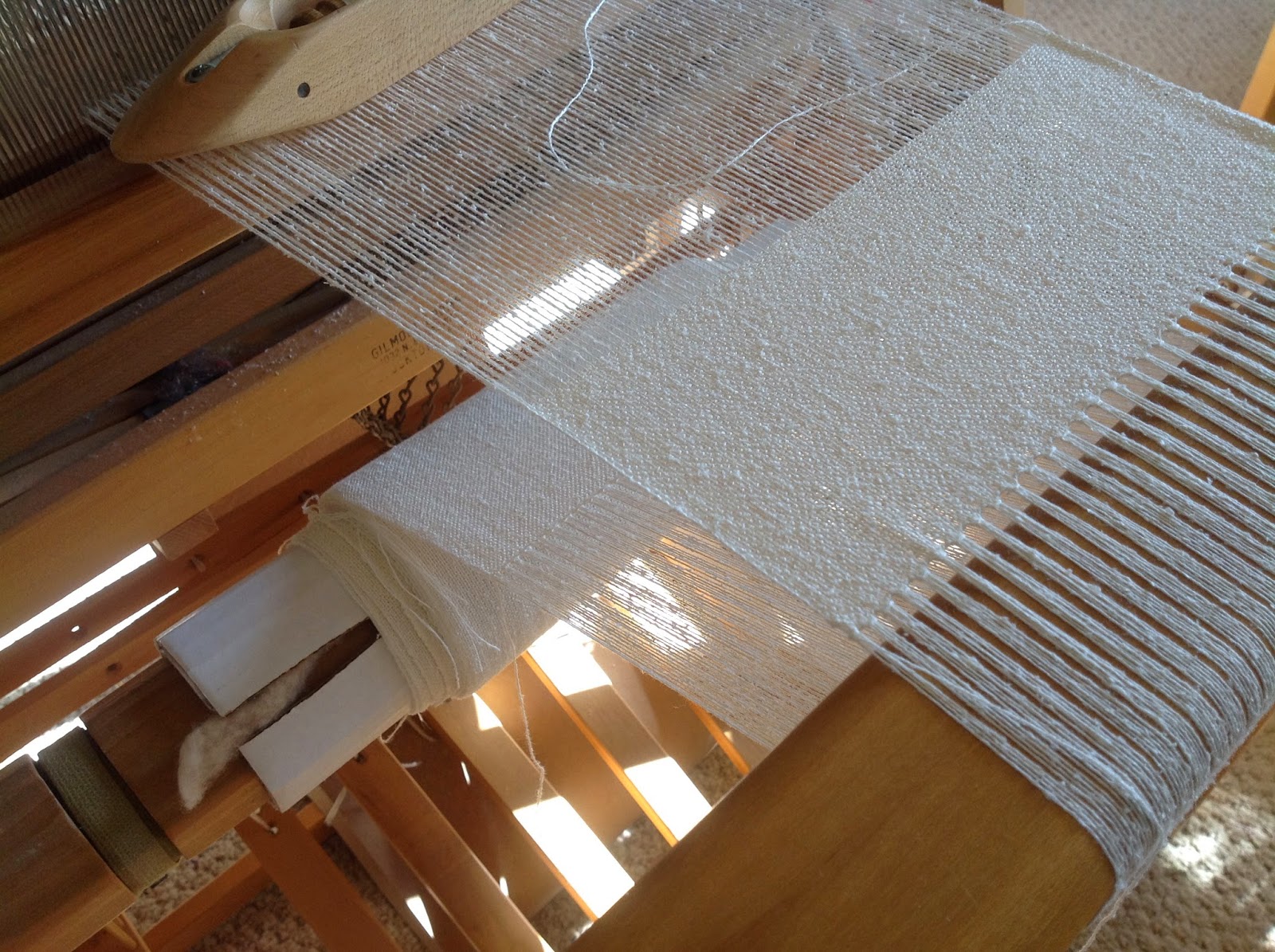 My sole weaving project is pretty uninteresting and looks a lot like medical gauze.  I've woven these scarves several times in the past because they do well at craft fairs and I have one coming up this Saturday.  I need to finish weaving these four so I can dye and press them. 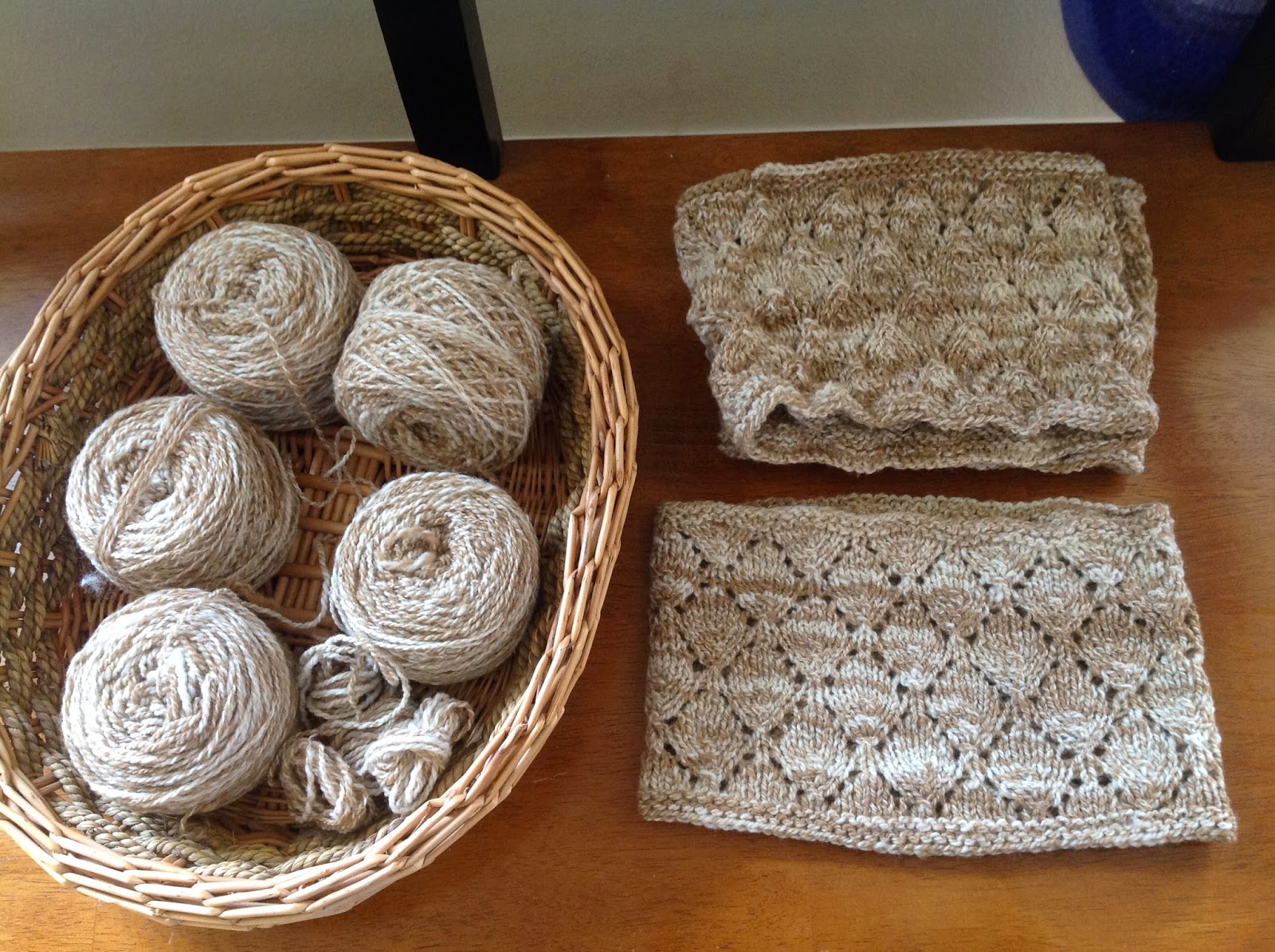 I'd like to finish the fourth of these cowls so I can dye them at the same time as the scarves.  My daughter asked me if I could knit seven of them as gifts for her belly dance troop.  Actually she asked me what I'd charge since she didn't want to spend more than $20-$25 and so that's what I'll charge her.  I bought this Merino at the Maryland Sheep and Wool Show about ten years ago.  I only purchased a pound of wool and have never been able to find a project for the yarn.  I'm pretty happy to finally use it. The roving was a blend of butterscotch and natural so they're going to look great after I dye them. 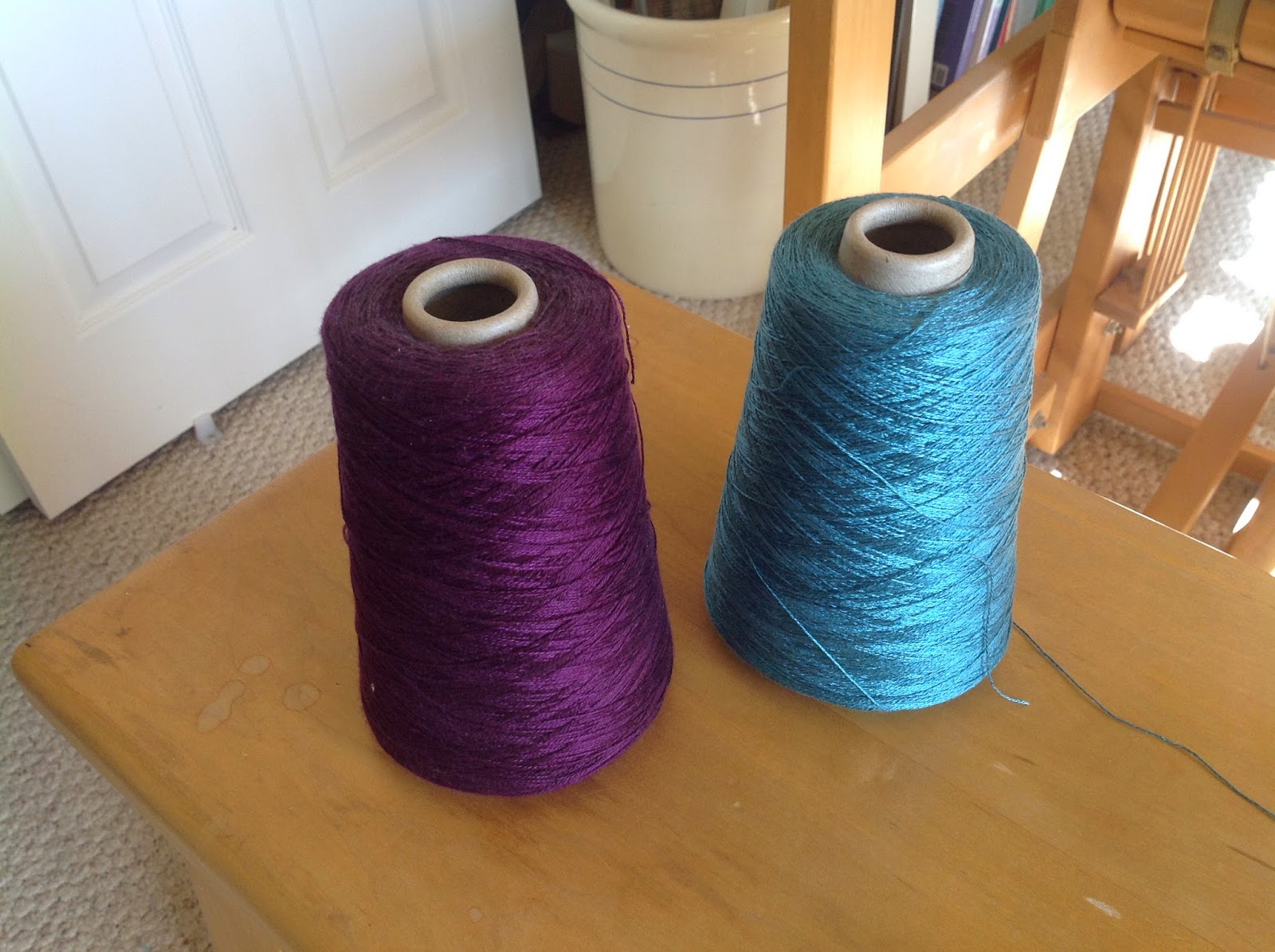 Time to start a new project!  I'm finally going to be able to put the information I learned in my workshop to use.  These Tencel yarns are analogous on the color wheel and I'm hoping will produce an iridescent cloth. 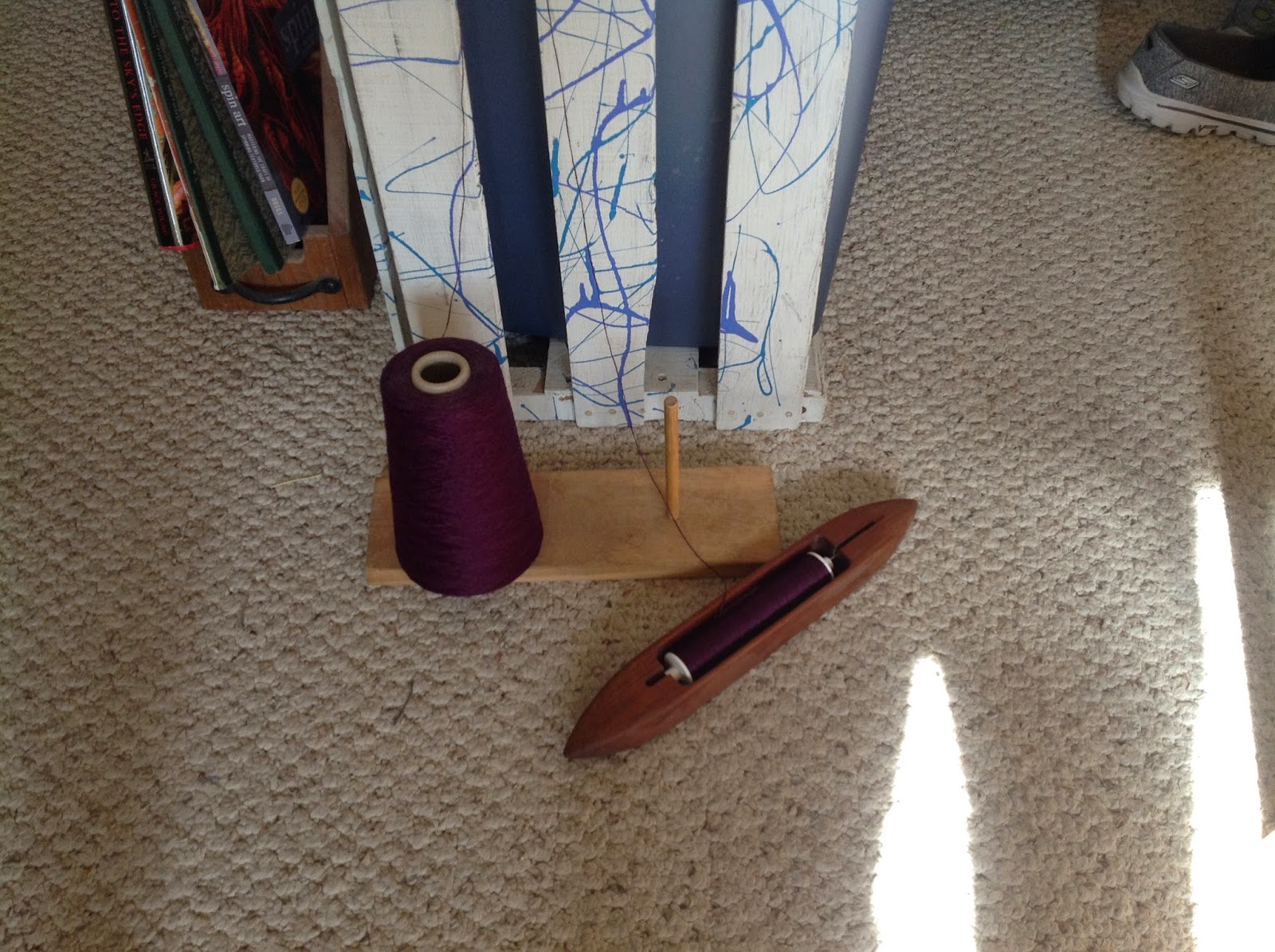 Someone on 4-Shaft Weaving suggested that next time I wind a solid warp that I first wind a small cone and hold two threads together.  I don't have a cone winder so this is my adaptation - a large bobbin in a heavy shuttle.  It took forever to wind that bobbin, which is when I decided that this is week I will order the electric bobbin winder - before I experience a repetitive motion injury.  I am very much looking forward to working with color again.
Posted by Sharon at 1:15 PM 1 comment:

Getting back to Normal 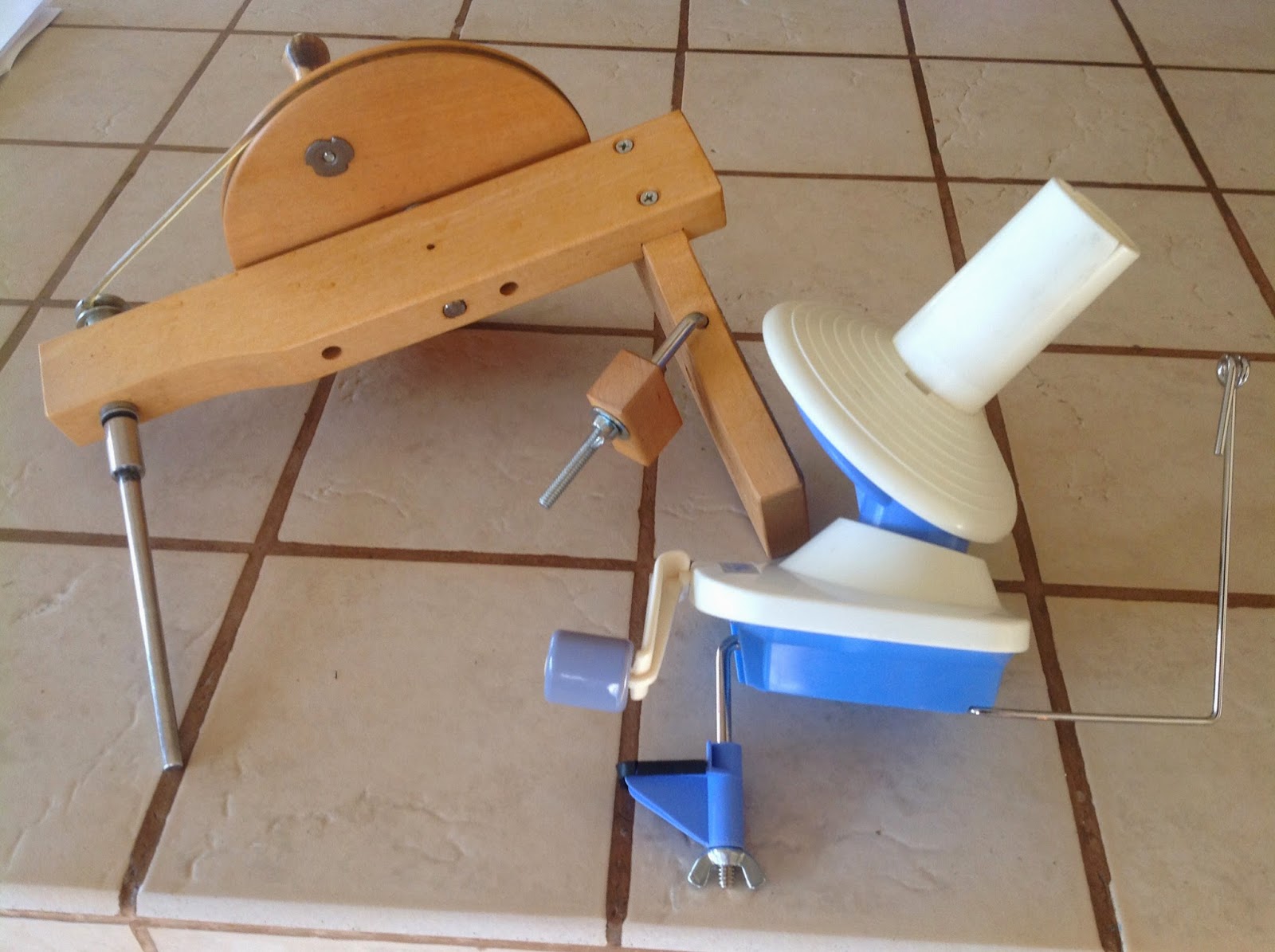 I took my winders to the guild's two-day workshop on iridescence, taught by Bobbie Irwin and you can ready my post on our guild blog here.  It was everything I had hoped for and I look forward to implementing the things I learned.  By the time I got around to weaving Wednesday morning, I discovered my winders were no where to be found.  I decided maybe it's time to think about buying an electric bobbin winder, so I called Gayle, a production weaver, for her insight.  She said she was one of the last to leave the workshop and noticed my winders and packed them up, meaning to email me that she had them. 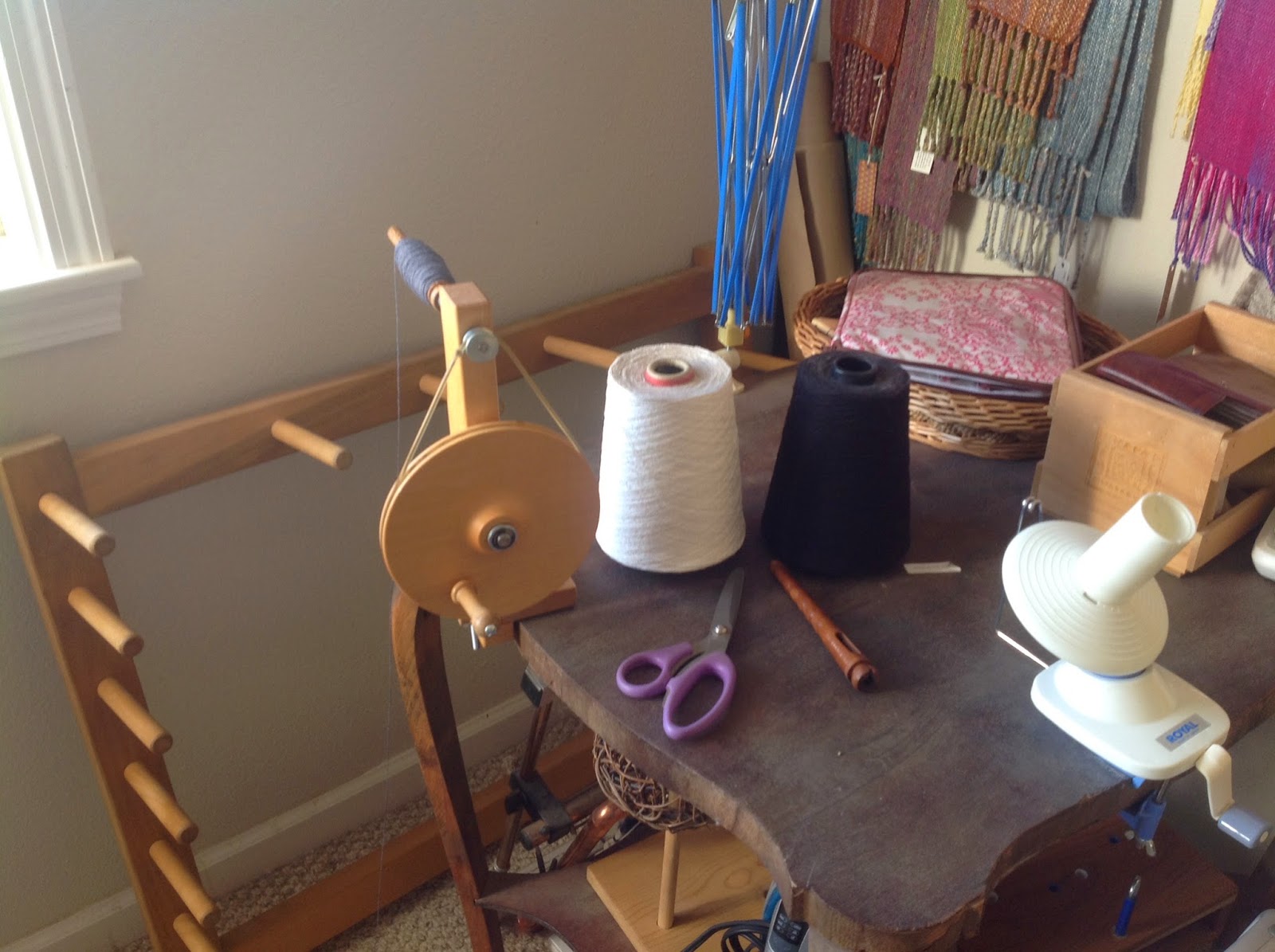 I told her - I'll be right there, which is relative since she lives in south Reno.  Gayle showed me her AVL winder and explained what I need to look for.  She also demoed her 40-harness AVL loom.  I've never seen a computer driven loom before - fascinating!  So my winders are back in the workshop and I have some time to think about an electric bobbin winder.  They are very long so I may need to move things around to fit one in. 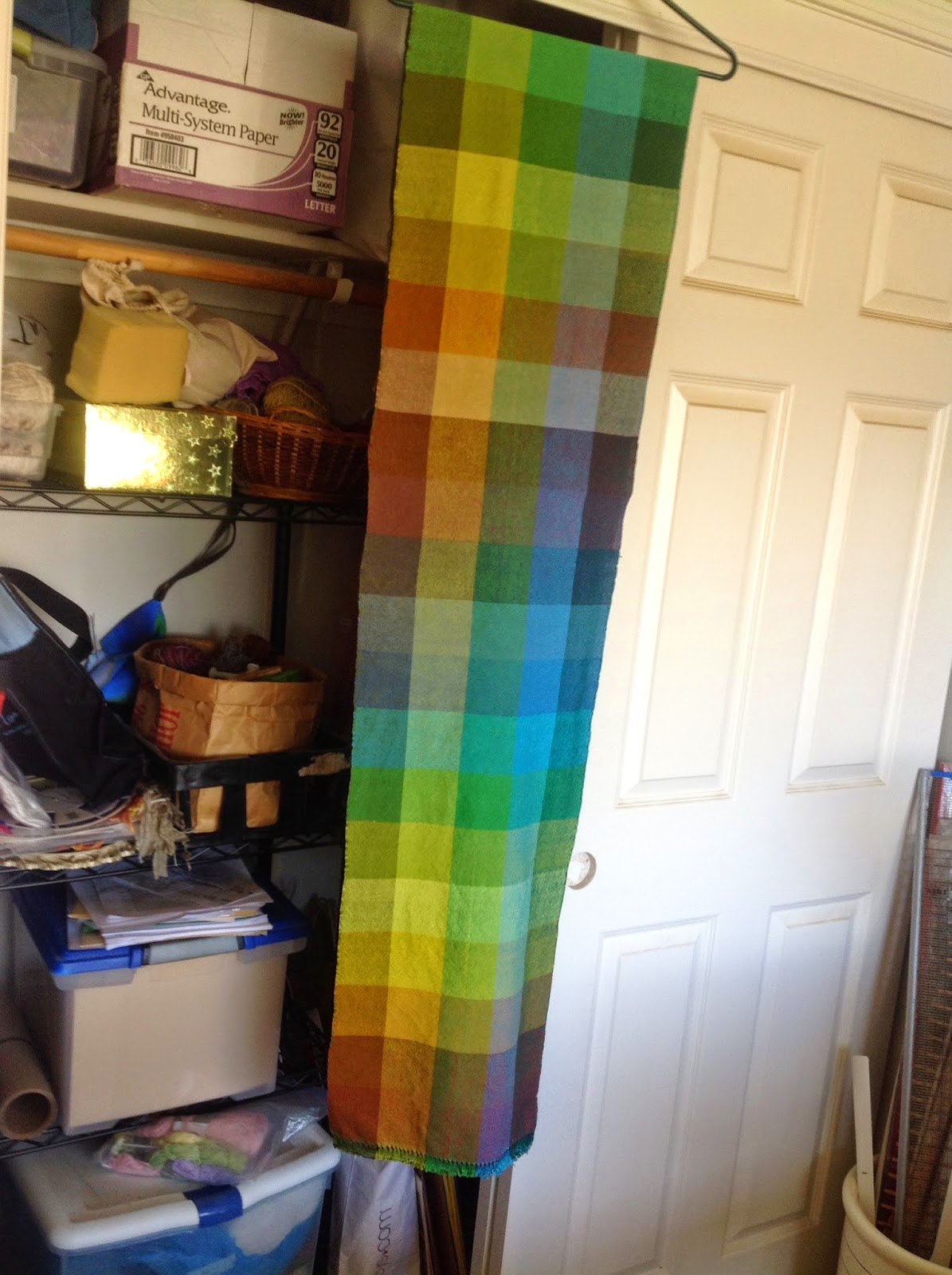 This is as far as I've gotten with my gamp.  I washed and wet finished it today but still need to attach the tassels of weft colors so I can decide which combinations I like the best. 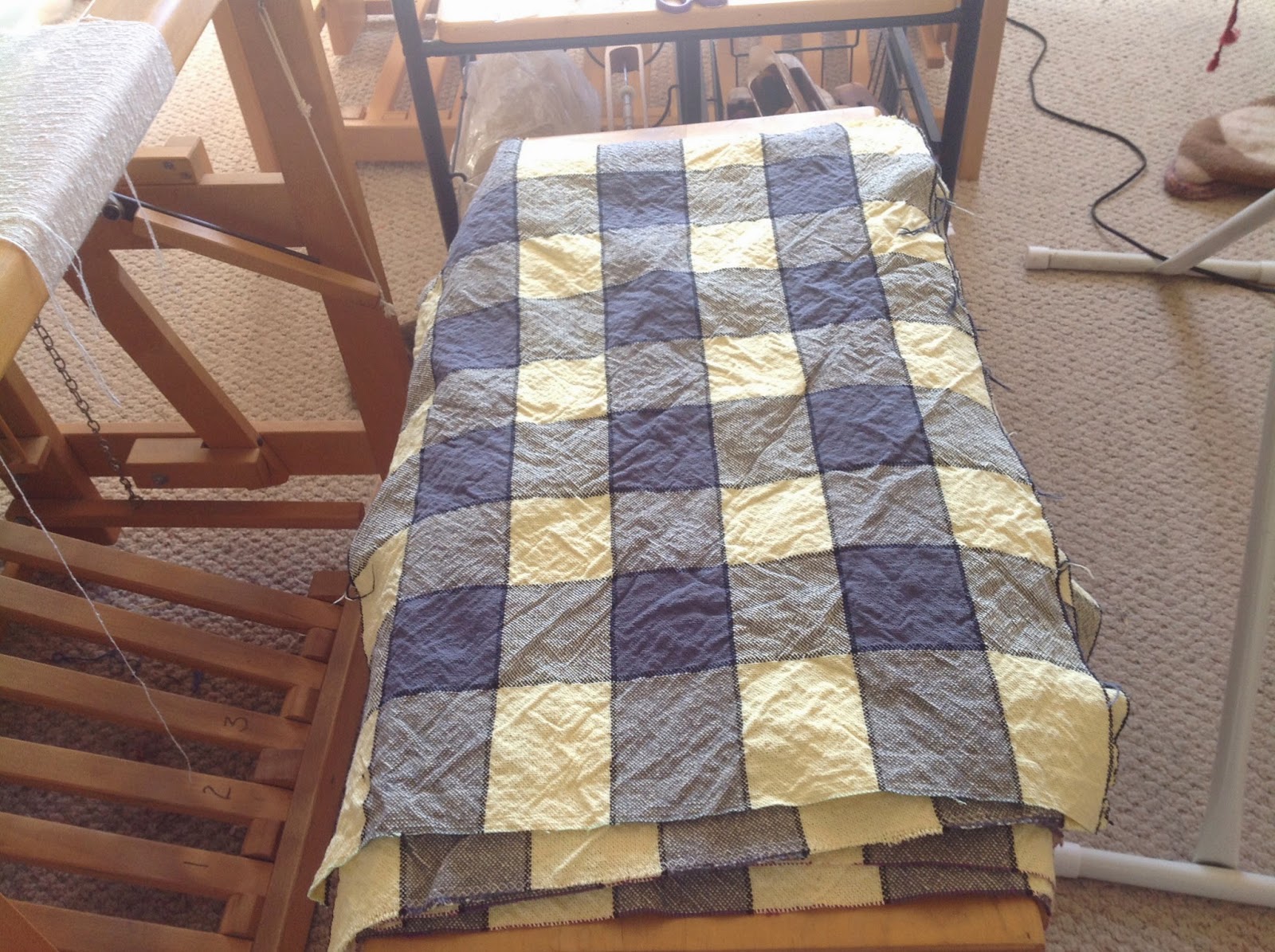 I finally finished weaving these towels and also washed them today.  I have to clip all the threads at each stripe and hem them, wash them again and then wet finish - whew!  There are a lot of steps from thread to towel!! 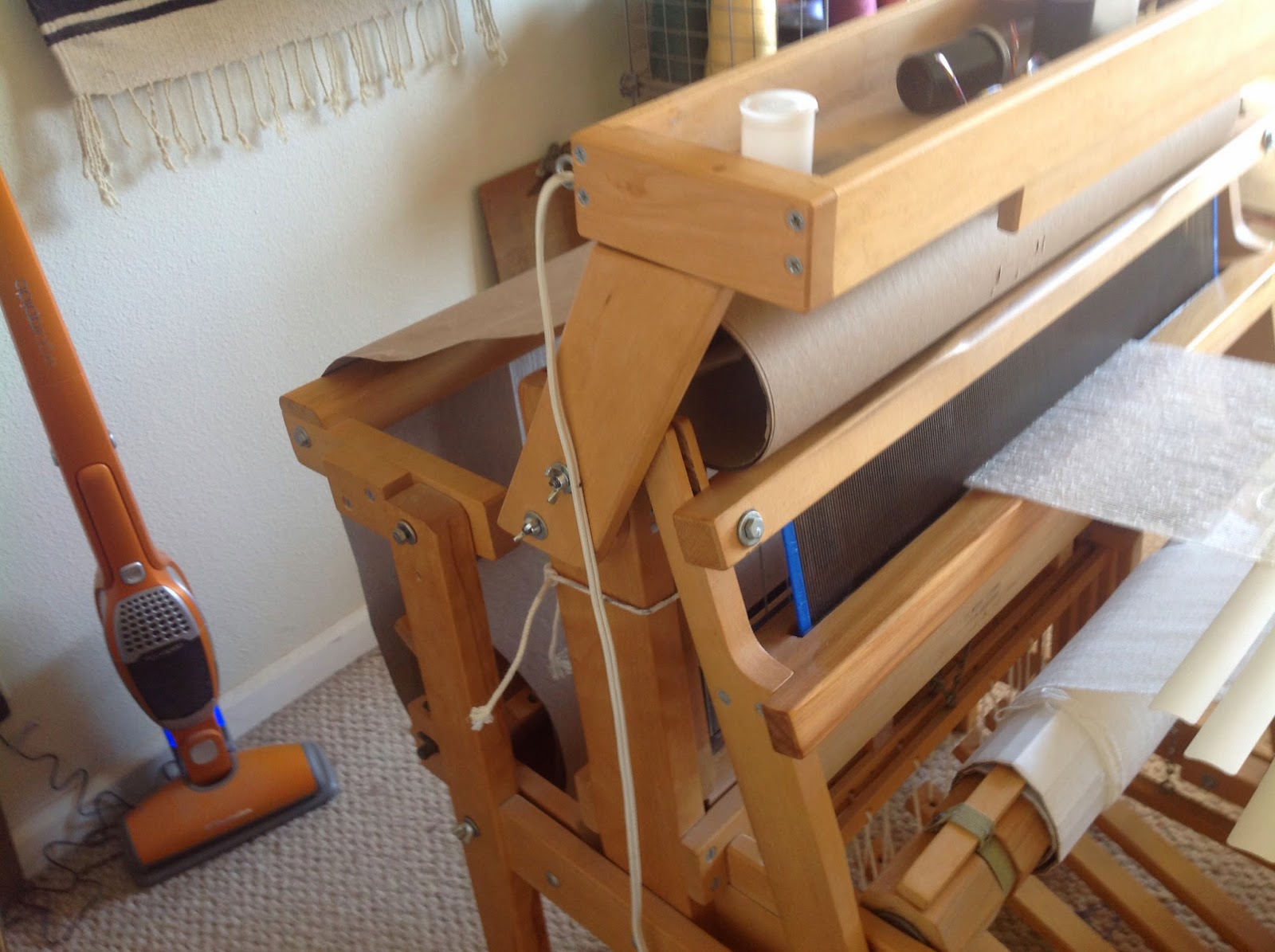 Maddie is absolutely obsessed with my packing paper anyway, but today she was giddy with happiness that I was finally back in the studio and simply would not leave it alone.  She kept hiding a toy in the center of the roll and then diving in after it.  I would pull her out, scold her and tell her no, sometimes a couple of times, she would cry then finally sigh and lay her head down for a nap.  It was an endless cycle so when I finished for the day, I pulled the paper up on top of my loom.

October was a busy month and November has started out the same with the workshop this past weekend, then a sub job on Monday and on Tuesday I had my first ever acupuncture appointment. She explained that I would probably not notice results right away.  I understand that.  The good news is that my insurance pays at the same rate as for physical therapy.  They wouldn't pay for massage therapy but Raina is also a massage therapist and plans to introduce that into my treatment down the line.  I'm optimistic.
Posted by Sharon at 3:40 PM 2 comments: