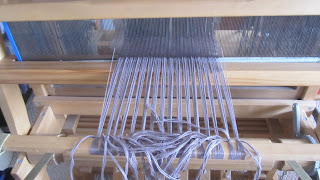 I took a break from the towels and addressed the sampler warp. I recounted the threading, replaced the missing warps, pulled the warp forward, tied in the new ends and then wound it back on. Then I changed the reed, sleyed the warp and tied it on - the loom is dressed! As soon as I finish the towels on Miss Millie, I'll put on a dummy warp for a handspun lap blanket and weave the sampler on Maude Mae. I love it when a plan comes together. 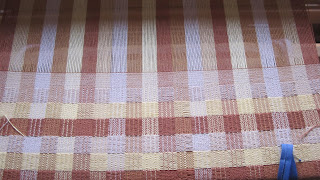 I finished the third towel today. The second one is plain weave stripes but the colorful warp was wasted on the stripes so I went back to the block weave, but made them an inch square. I think I'll only use two colors and make rectangles for the fourth towel. We're flying to San Diego Thursday morning for my stepson's wedding, so I'll decide which colors to use when we get back. 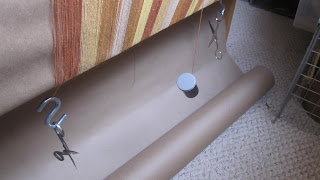 I watched Madeline's instruc-
tional CD and adopted her suggestion to tie in the floating selvedges and then weight them with S-hooks, only mine weren't quite heavy enough so I supplemented the weight with a couple pair of scissors -perfect. You can see the roll of contractors paper. It has made a huge difference in keeping the tension even across the warp and throughout the project.

I would have enjoyed the project a lot more if I hadn't fought the selvedges at every turn, literally. I finally came up with a make-do solution. I threw the shuttle and then stuck the index finger of the same hand into the warp about midway and below the weft, then drew the weft down on the other side with the other hand, forcing the weft into a neat arc. The problem was compounded by the weft ends building up. I emailed Rae and am going to visit her studio after we get back and see how an end-feed shuttle works. I think there's one in my near future. 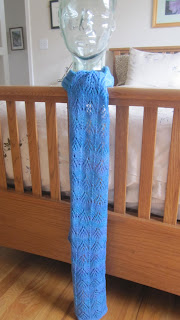 I finished another scarf. This one is from my blue ribbon handspun yarn. This year I'll submit it at the Nevada County Fair, but as a scarf. I don't know if you can see the subtle color changes but it's really lovely and soft - merino, bamboo and silk! I hope the judges like it a second time. 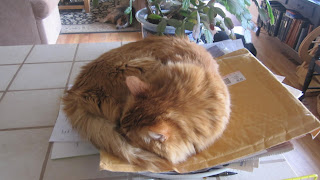 Benita and I "chatted" last month about journaling, after I found those of my mother and grandmother. She sent me a journal to encourage me to get started keeping one of my own, which I am doing. Thank you Benita! I idly laid the mailed on top of the Mail Dish. The snoopervisor immediately wanted to know all about it and ended up adopting it as his favorite place to sleep. The sun hits there in the later afternoon and we haven't had the heart to dispose of Charlie's unsightly beloved bed - so far.
Posted by Sharon at 8:18 PM 3 comments: 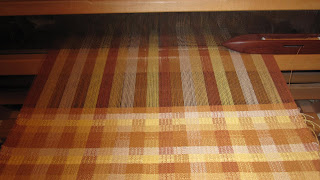 I had a treading error which you see in the yellow block, third from the top, should you look closely. It discouraged me from continuing with this pattern, so I changed the tie-up to twill and was going to use that in the next towel. The tie-up change doesn't matter because the error is still there. It only doesn't appear in tabby. 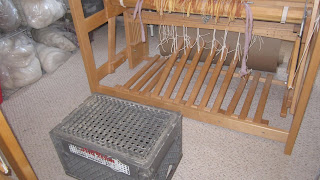 I'm going to have to change the tie-up back and Gilmore tie-ups are a complete workout. I took another tip from Rae. She uses a milk carton when she's working in the lower regions of her loom. I couldn't believe how much easier that was than on my knees. 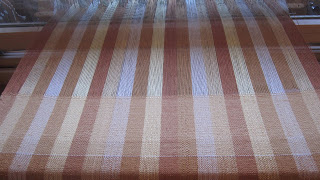 I've switched to tabby for the second towel. I'm a fan of stripes and thought this would be a fun alternative, but it accentuates the unplanned dark stripes together in the center. This could have been avoided had I used weaving software. I've downloaded the freeware from Pikes Peak Weaving Guild, which LuAnn recommended, but I didn't know how to get started. I asked Amanda about a weave structure on her blog and what software she had used. She said she uses the same stuff. Amanda took pity on my and posted a tutorial on her blog which you can access here. Thanks Amanda!!!!!


This is the draft I was using for my towels. It's from my friend Beryl and she says it's called called halvdräll or “Poor Man’s damask”. It's really easy to weave but I made a major threading error and don't have enough warp to cut it off and correct it. I'll change back to the block tie-up for the last two towels and squint when I look at the error.

I'm thinking about buying the 11" end- feed Bluster Bay shuttle from Yarn Barn. It's really expensive and each pirn is $5.50. I'd sure appreciate any feedback anyone has to give me. 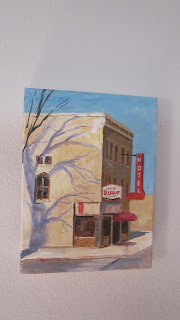 Yesterday was my last art class. I reached a point where I was asking so many questions, that we agreed to finish the session with Erik doing it as a demo. This is the first time in all the art classes I've thrashed through that I've had a thoughtful demonstration of colors, layers of colors and glazes. I had already painted the basic building. I was missing the rest. 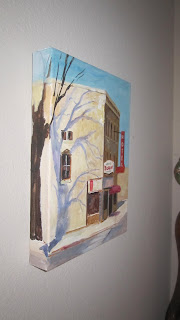 This was also my first time to use a gallery frame so part of the image is on the side. I'm glad Erik did the tree shadow. I was happy that my perspective was good but the details like that and the signs were vexing me. I'm planning on a plein air class with him starting in April. I think I need to take a step back and work on quick sketches for the next month. I'm going to miss our Fridays - I had no clue that the art classes would lead to a genuine friendship. It hit like a ton of bricks when I left. I was very sad and went for a therapeutic swim.

My elbow pain has returned with my spinning - I'm having a terrible time unlearning the pinching technique. I relax and then I find I'm pinching. Drawing doesn't hurt anything but my pride. I'm sure there's going to be a happy middle.
Posted by Sharon at 10:02 PM 2 comments: