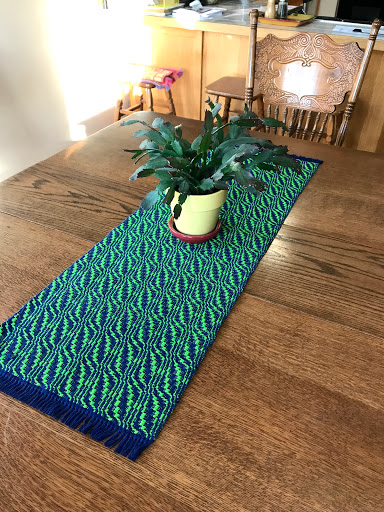 The take-up and shrinkage on my runners took me by surprise.  I’m going to repeat this in different colors and figure out how much warp I need to get the results I want.  This is too narrow and too short. 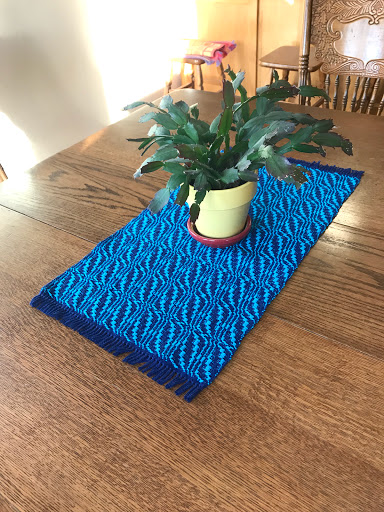 I liked the colors on this runner, just not the size. 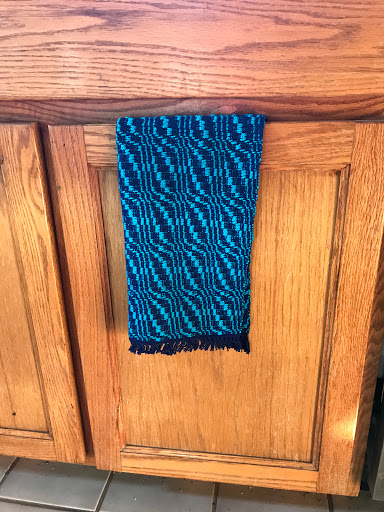 In fact, it’s the size of a towel.  I’ve woven the same dish towels for way too long, and I have a long way to go to knowing what I’m doing with this overshot, but they were fun to weave.  I want a runner and placemats.  Back to the drawing board! 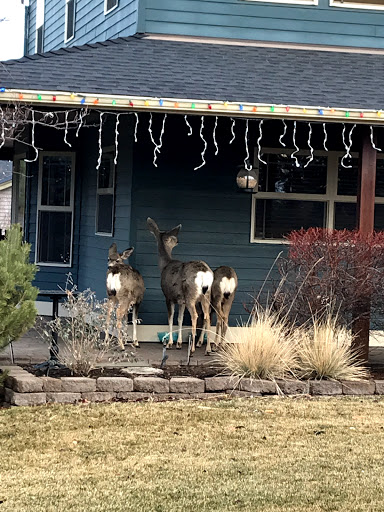 I saw these guys on a morning walk last week.  There are bowls on the walk there which I assume have been left for the deer, maybe water? I’m still having problems with my left forefoot and have an appointment to see an orthopedic surgeon January 17th.  It hurts to walk but having cabin fever hurts more. 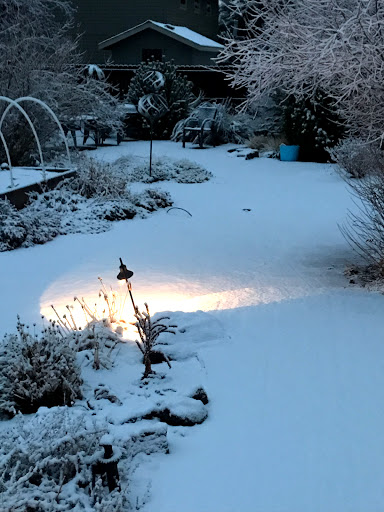 It started snowing on Christmas Eve, which we celebrated here with family and friends. 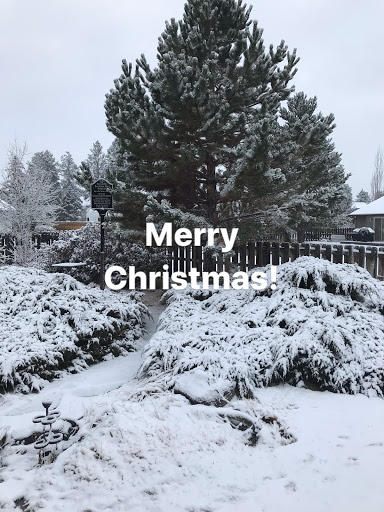 And we awoke to a White Christmas, celebrated with family at Josh and Missy’s.  The new tradition is king crab legs and green salad.  It’s very good tradition :-)

I’ll leave you with this New Years Wish.

“May your coming year be filled with magic and dreams and good madness.  I hope you read some fine books and kiss someone who thinks you're swonderful, and don’t forget to make some art — write or draw or build or sing or live as only you can.  And I hope somewhere in the next year you surprise yourself.”  Neil Gaiman

Winding down the year 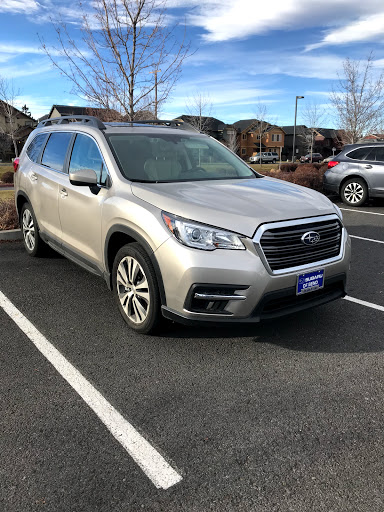 Last Thursday was the final day of Smart for 2018 and I almost didn’t make it.  My add oil now!! light came on in my car and lucky me, I was only a mile from the Subaru dealership. They scanned it and found a faulty sensor so gave me a loaner, this 2019 Subaru Ascent, mileage 1974, and my ride for 24 hours.  They understood my need for haste so had me out the door in no time.  I was only five minutes late and my little guy was still picking out his books.  Twice a month we have book giveaway day where they get to select one of the books to write their name in and take home.  BTW, I loved everything about this car except it’s size.  It was huge and I could barely get it in the garage. 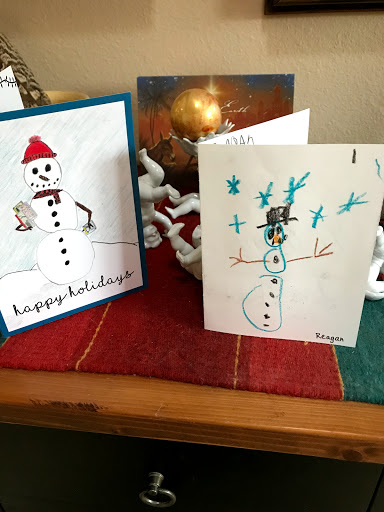 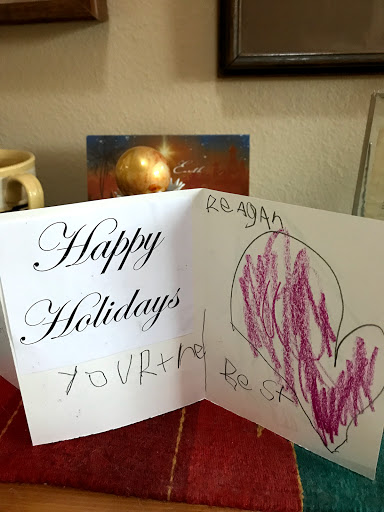 Smart gave each of us readers a Christmas card and one of my kinders made one of her own for me. “And did you see that it says Happy Holiday?” she asked me. She was as proud of her work as I was delighted to receive it. I was so thankful to Subaru for getting me there on time.  We only have four payments left on Jainey so I know the loaner wasn’t purely altruistic, and yes, I was tempted, and no I didn’t bite. 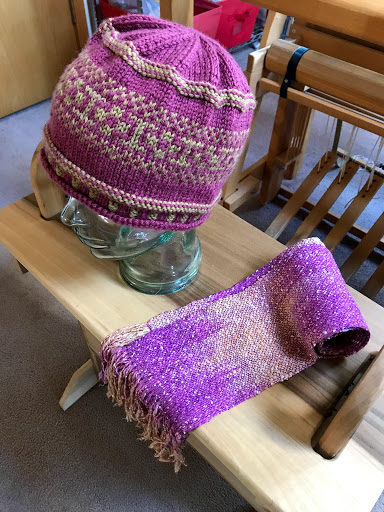 Last Sunday I took a name from the “giving tree” in the narthex at church of a 17-year-old girl who wanted a scarf, hat and gloves, in pink and yellow.  I knew I have woven this scarf last year so after church went downtown to Wool Town and bought the closest colors i could get to knit a hat - not as close as I would have liked.  I wrote her a note to say that I hope she’s not disappointed in my rose and gold interpretation of pink and yellow.  The gloves were from Costco with the sensitive fingers that allow use of mobile devices, so at least she won’t be totally disappointed. 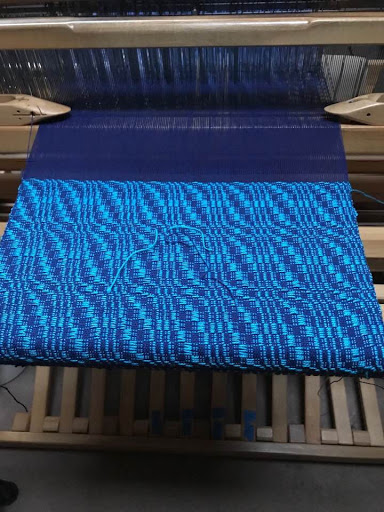 I put enough warp on for three table runners and have finished the first two in this colorway, one for our table and one to sell.  This is my first Overshot project and I’m enjoying the heck out of it. 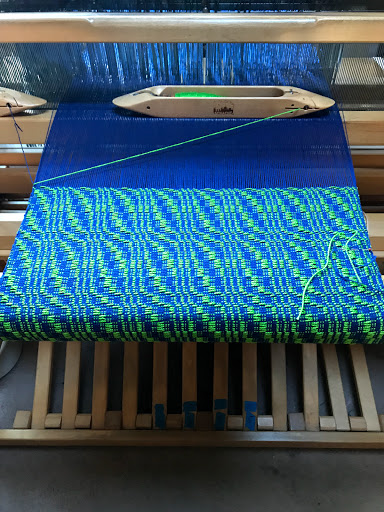 The pattern yarn in the last one is apple green, also for sale.  I think I might want to make three more in different colors.  I certainly have plenty of 3/2 mercerized cotton that I bought on sale and have never known what to do with it. 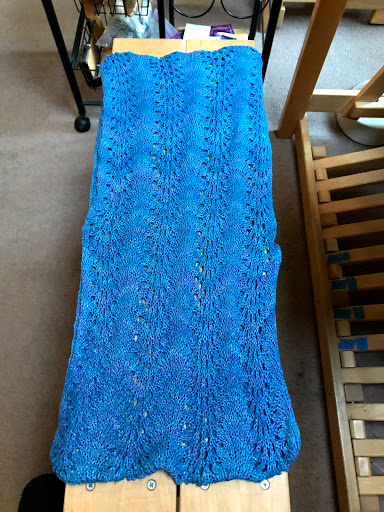 I really do seem to be on a blue kick.  I’ve finished reknitting my “blue ribbon” yarn and sewed the ends together in a cowl.  I’m very fond of cowls these days.  I can’t spit toothpaste on them when I’m wearing them in the house. 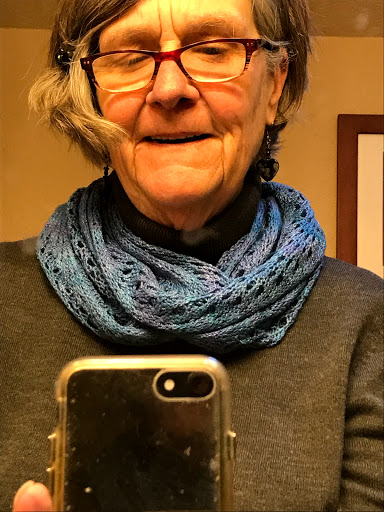 I don’t like this picture of me, but then I don’t like any pictures of me.  That said, it shows off the subtle color changes that I love so much about this yarn.  I hope I fall in love with spinning again some day, but that day is not now. 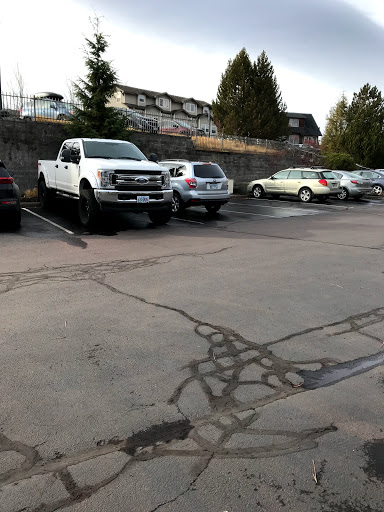 Ian and I go to the same dentist as my son’s family so when a crown came off Sunday morning, I called and left a message on Dr Grieb’s answering machine, letting Marci know that I’d be calling her first thing in the morning, which I did. Fortunately someone cancelled and I was able to slip into the 10:00 opening. We were about half-way through fixing my tooth when Dr Grieb realized that my son would be coming in to get his teeth cleaned. He thought it would be fun to call Mo out and have me put on a mask and slip into Mo’s place and act like I was another hygienist. I slipped into her chair and rolled around, when Josh says, “Hello Mummy’.” I realized why we couldn’t surprise him when I got into the parking lot. He had parked right beside me.  In fact, I could park my car IN his truck. 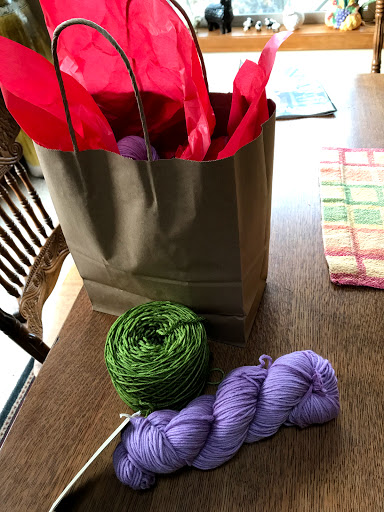 I went to the yarn story last Friday on my way to return the loaner car and pick up Jainey.  I’m going to knit the green yarn (Malabrigo Rios) in size three months for Julia’s baby shower in March and then the lavender into a six-month size for the baby’s birth, April 1st.  I cast on this morning.  Time to get this show on the road. 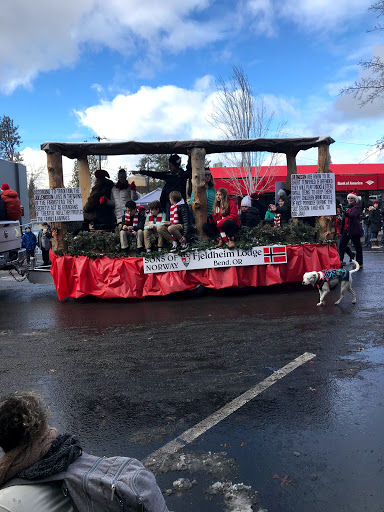 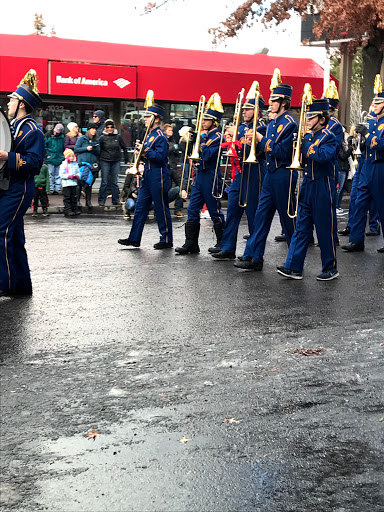 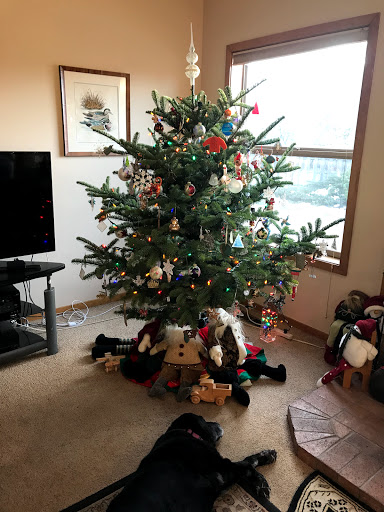 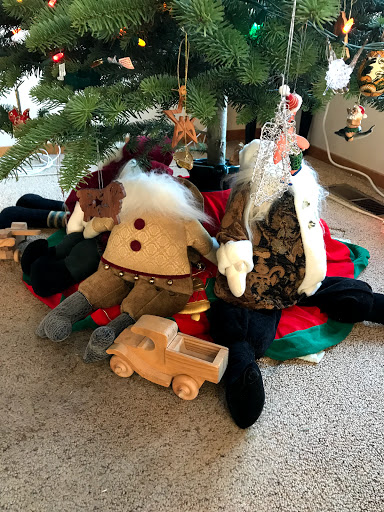 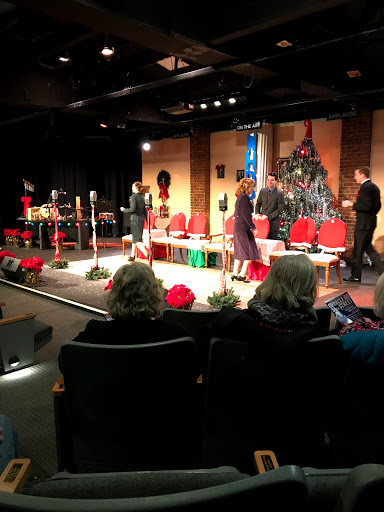 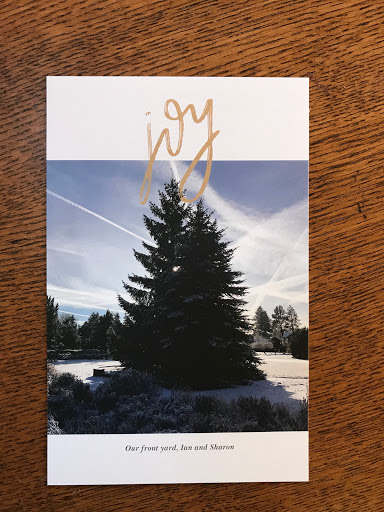 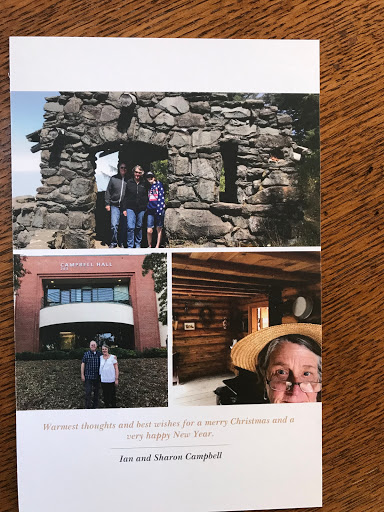 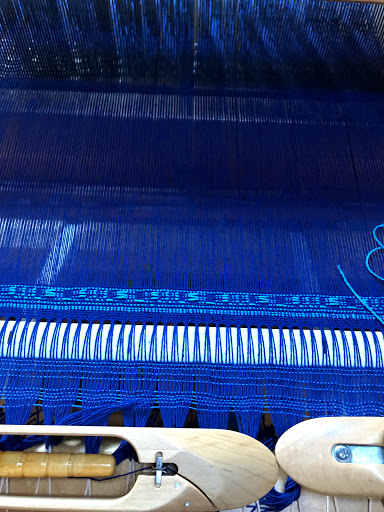 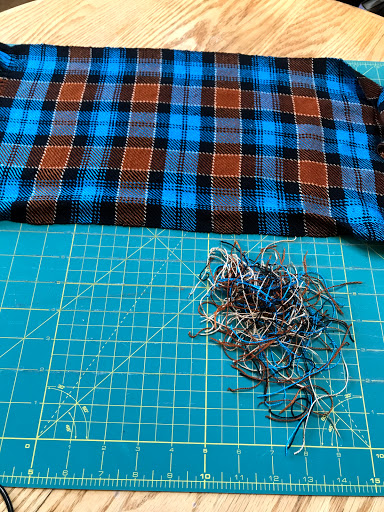 I thought the light at least would be sufficient to clip the threads on the tartan scarves but it was a close call when I nearly clipped the scarf.  It’s time to let unfinshed things remain unfinished today and let them go. The scarf will be received by Christmas but the table runner won’t be ready.  Some days are like that.