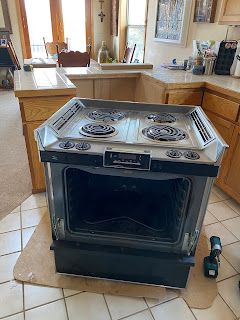 This is the 30-year-old stove that was in the house we bought five years ago.  Before then I didn't know that some stoves in open floor plans have to vent down under the house.  They also cost a whole lot more than updraft stoves with range hoods.  The control panel part of the oven died last year and while the oven was probably still working just fine, we couldn't control it.  We decided to order a replacement last August.  Due to supply line interruptions production has been at a snail's pace and our replacement didn't come until last Thursday, 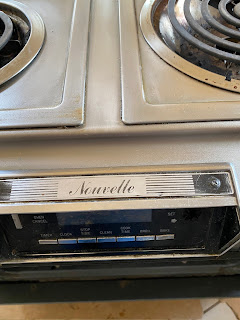 This is the brand we were replacing.  Ever hear of it?  Us neither.  Apparently Whirlpool bought them out.  There are no replacement parts.  Our installers had visited the house a couple of months ago to scope out the job and called a couple of weeks ago, wondering if we had gone with another crew.  Nope.  No stove, still waiting.
When Ian called them last week to set up an installation date, Damian put us at the top of his list, said we had waited altogether too long.  He and Zach are the crew and worked three hours yesterday getting as much of the installation completed as possible.  The unpleasant reality is that the old stove was a 30 amp without a ground wire, the new one is a 40 amp and we were going to need an electrician in order to finish the job.
Ian found a journeyman electrician on the Next Door app and darned if he didn't show up this morning and rolled up sleeves.  He said he has an overload of work, like all of construction in Bend, but he felt bad that we were left hanging.  That's a phone number we'll hold onto.  Damian will too; he was excited to have a reliable electrician to call on. 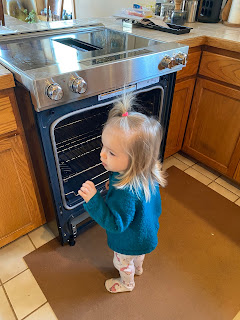 Our installers put the stove box back in the hole because we told them we had a baby coming in the morning.  Delaney was absolutely fascinated by this new thing.  They left the door off to make it easier for the electrician. 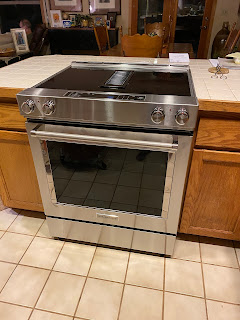 This is the new stove.  It's unlike anything I've cooked on before.  The burners are instantly hot, just like gas.  Ian and I falling over each other planning meals and baking.  It even has a steam rack for bread.  With the installation expenses, it was a hefty price tag but I know it will be worth every penny.  I think it's part of Covid thinking - since I'm stuck at home, why not make home a little better. 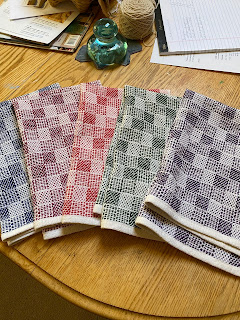 I am still trying to weave summer and winter without having loops on the backside.  I know now that they're from not advancing the warp as often as I should.  There was one more cobalt towel which I kept for myself. 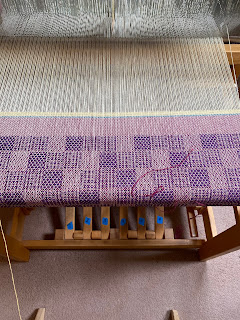 I had a couple cones of pale yellow so I decided to weave that same draft but with three colors instead of two.  The yellow saddened everything.  I should have known. 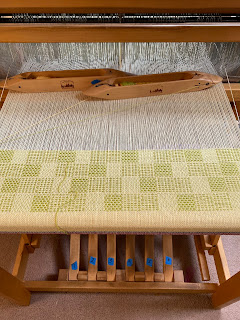 So I decided to stick to yellow companion colors, bright yellow and lime green.  Same thing.  I have more warp so guess I'll see how the light yellow can butcher orange. 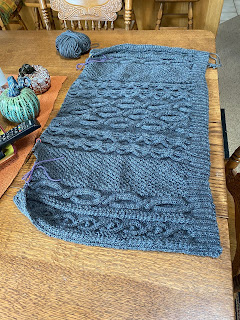 I'm trying to keep pace with the Aran knit-along and have now divided for the sleeves.  The instructions for saddle shoulders were a week ago so I am falling behind.  Ian told me that if I were to knit him an Aran sweater that he would wear it.  I love these crazy cables and am happy to have another sweater in the wings.  I told him it won't be ready until next winter. 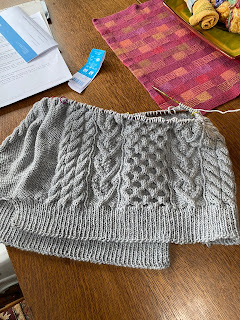 I'm enjoying the Bronwyn sweater very much.  I always wonder why I keep making sweaters for me.  One of the ladies in our knitting group gives away almost everything she knits and she's a fast and brilliant knitter.  I decided I should be knitting for Alexia.  She's 16 now and would appreciate my work, so I asked her if she would like me to knit the Bronwyn pattern for her.  I told her the specs of the yarn and set her loose on Web's website.  Several hours later she decided she liked the same yarn that I'm knitting the best so it's been ordered and is in route. 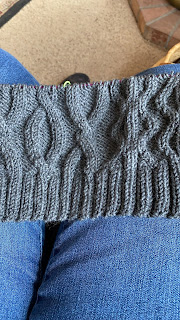 At the same time I've joined a KAL (knit along) along with several ladies in my knitting group.  We've created a special group without our WhatsAp app which has been helpful.  This is a cardigan which is a little harder than knitting in the round.  Getting started was the hardest part but now that I can see the patterns better, the charts are easier to read. 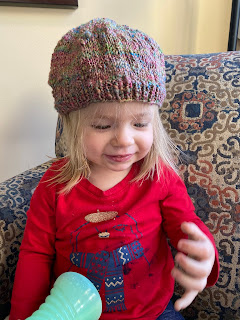 I made this hat for Delaney last week from some yarn that I had spun very badly many years ago.  It's just been taking up space but it was just the ticket for her cap. 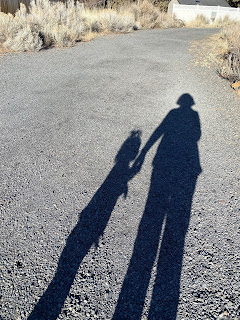 On days the afternoons are nice, Delaney and I have started walking out to the mailbox.  She was nervous at first but is loving it now.  She is almost tall enough to reach to reach the door handle so we're going to have to lock the deadbolts from now on. 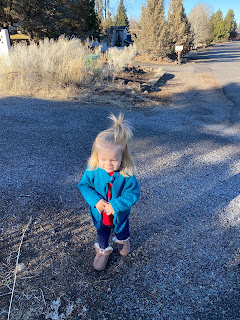 On this particular day we got to the street just as a young couple with stroller and leashed dog walked by.  She was ready to go with them.  A baby and a dog!  What's not to like?!!  This is the most recent sweater I've made her and I'm taking a break.  She's growing too fast!! 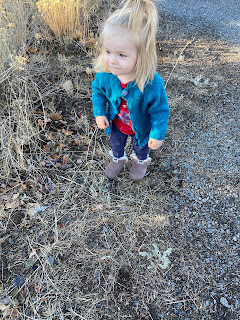 I have to admit that it's pretty cute but the lacy knitted-in button bands make the front of the sweater hang almost 2" longer in the front than the back.  From now on I'll be picking up stitches and knitting in the button band.  Lesson learned. 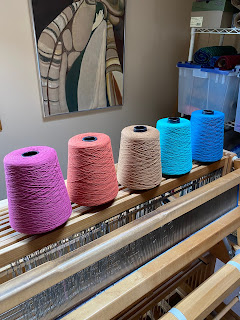 I am trying to get back to weaving before I forget how.  I just received an order for six more cones of yarn and in new colors.  I hadn't planned to use these all together but now that I've seen them, that's exactly what I'm going to do, just as soon as I figure out what that is. 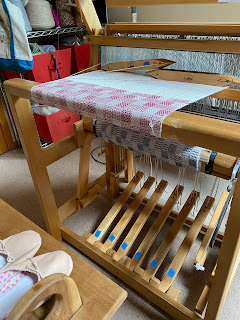 I'm over half way through with this summer and winter project and have finally figured out why the shuttle goes under groups of threads and creates loops on the backside.  I've made two changes.  I remove my foot from the treadle just as soon as I'm finished with that treadle and I slide my foot back to rest on the bar.  I also advance the warp very often and work as close to the fell as I possibly can.  The last two towels are error free.  The first one is not but I had planned to keep that one anyway and now I have to.
The guild board was having our quarterly meeting on  the morning of the 6th and all our phones were pinging the whole session.  If we had understood the magnitude of the events I'm not sure we would have been able to continue.  This past Wednesday we realized that our general meeting was scheduled for the same time as the inauguration.  So we decided since our meetings are on Zoom that we could hold just one meeting this month and lump the Saturday meeting with the Wednesday meeting, but oh dear, the video wasn't working on Zoom.  So I cancelled both meetings.  We have some great programs coming up and I'm looking forward to them, but we just need to get past January 20th.

Posted by Sharon at 5:21 PM No comments: