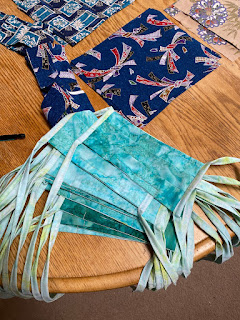 My life has been taken over by emergency face masks.  The first ten I made from a kit are ready to be turned in to the collection location at Bend Vet. 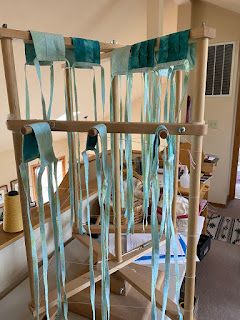 I thought I read that after completion they needed a second hot wash and dry.  I hope I'm wrong because the straps came out of the dryer looking liked cooked fettuccini. I ironed while damp and they are hanging to dry, looking like a pod of jellyfish. 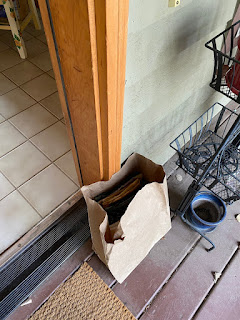 The contact point for mask makers is a Facebook Page called Central Oregon Emergency Mask Makers.  I happened to see the offer of fabric from my friend Mary who only lives a mile from here.  I said I'd like some if she had any left.  She did and she delivered! 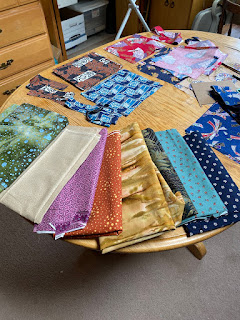 At this point I think I have all the fabric that I can possibly use.  I washed and ironed it today and still got a five masks mostly assembled and two completed. 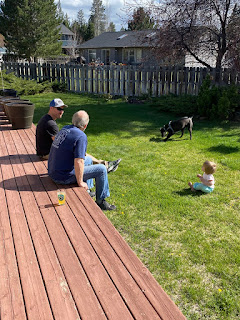 Matt likes to visit when he picks Delaney up after work.  They have a new puppy and he's been taking her to work, socializing her on the job sites.  She's been on a lead all day so he gave her free time and she enjoyed the heck out of it, getting completely soaked in our pond in the process. 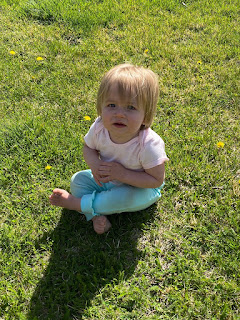 Delaney loves to be outdoors and though she crawls in the house, is content to just sit in the grass and watch the birds and the trees. 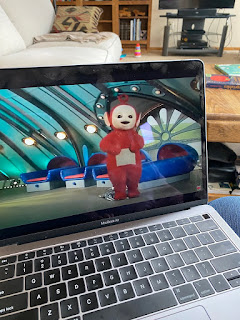 Every afternoon she and I have some Teletubbie time.  If you've never seen them, they look like this and there are four of them.  They jabber and she loves them.

Our governor is going to open up non-emergency surgeries on May 1st and we're holding our breath that son Josh can finally get scheduled for the bowel resection he so desperately needs, the fallout from being born with Meckel's Diverticulum.  As he says, he had the first resection when he was 12 and it's lasted 36 years.  This one should take him on out.  Waiting, waiting, and more waiting.

The Laugh I Needed 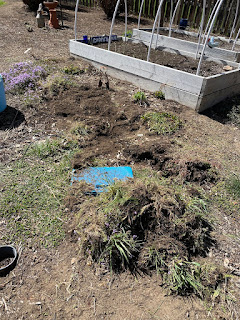 We're going to have at least a week of cloudy weather so I decided to stop procrastinating and finish pulling the grass that has taken over this flower bed.  It was an exhausting task since the clumps of grass are so heavy.  I'm going to be sore tomorrow, every part of me. 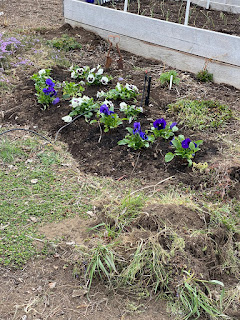 I finally had to ask Ian to help me finish off the job before it finished me off.  He bought three flats of pansies from Costco over a week ago and we've been trying to harden them on the cool nights.  Today they went in the ground.  We've learned the hard way that if you don't buy the pansies when you see them at Costco, you'll have to buy them somewhere else. 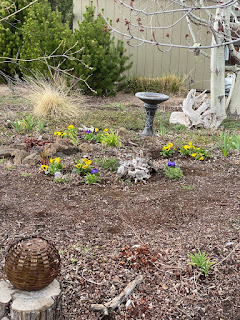 Things are just starting to pop up and show signs of growing but at least for now when I look out the kitchen window, I'll see cheerful pops of color that aren't dandelions. 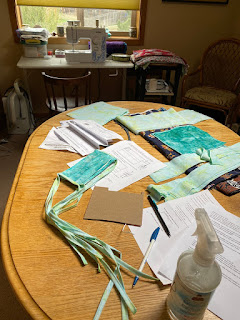 I've joined the ranks of mask makers.  It's been so many years since I've sewn, this has been a hard curve for me and shows me that my memory isn't what it used to be.  I wouldn't be able to do this wtihtout all the help from a Facebook group, Central Oregon Emergency Mask Makers.  It took me two hours to make two masks but I'll get faster 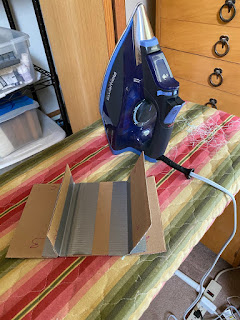 I found a tutorial for this jig on the Facebook page and it reduces the time per mask by at least ten minutes.  You don't have to iron every step of the way, though I did buy this new iron from Costco yesterday.  My old one had lost the ability to steam and I'm glad to have this for when I need it.  I followed another tutorial for the straps and found finger pinching and folding really quick.  I had a couple of hours this afternoon - dress my loom or make masks? 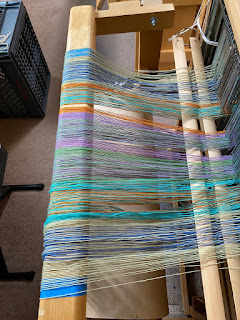 And the loom won.  I'm not ready to weave - but almost!  These are tidepool colors. 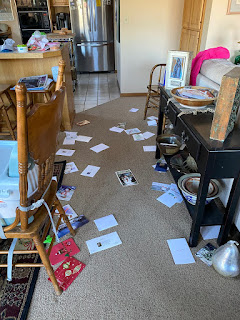 Several years ago I decided instead of putting Christmas cards in the recycling, I'd just put them in a bowl and save them for later.  Delaney has found that bowl. 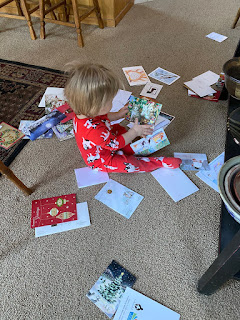 She loves to study them, picking up cards, putting them down, picking up different cards. Christmas cards are graphic design, meant to capture your eye, and Delaney loves them.  We scoop them up and put them back in the bowl several times a day to give her another activity.  She's crawling with a vengeance so she's all about activity. 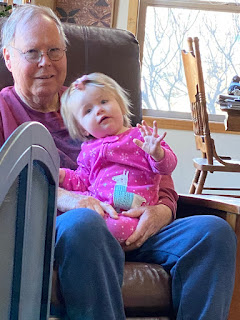 She is our sunshine. 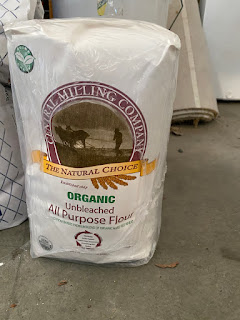 Ian found this at Costco, two ten-pound bags of unbleached all-purpose flour.  I'm making a single loaf each week, whether we use up the previous loaf or not.  And I'm slowly getting better and more predictable. 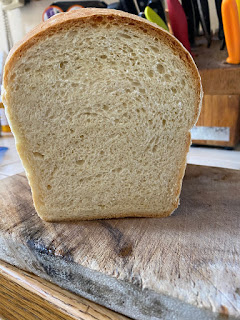 I made this loaf last Thursday and got distracted by the baby so that it ended up rising three times.  I'm planning to make another loaf this Thursday but not just with bread flour.  This time I'm going with a mix of white, whole wheat and oats.  Ian found a pound of whole wheat at Newport Market.  It's in a deli container and priced at $.99/pound.  I'll use it sparingly. 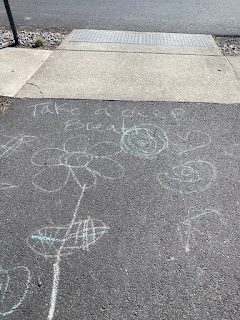 Yesterday I walked through the planned community next to us and was touched by this sideway art.  At the other end someone had traced children with chalk and written, "We're all in this together."  This end was all flowers and the encouragement to "Take a deep breath."  This truly is the great unknown. 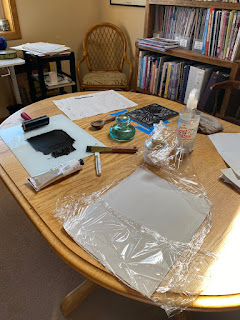 Last fall I was invited to participate in a print exchange in May to celebrate Pat Clark's 85th birthday. Our agreement to participate was due October 11, 2019 and was anticipated to be an edition of 30.  We were given a statement from which to pull our inspiration and the reception/celebration was to be in May 2020.  Oh how the world has changed in those six months.  I expect I'm the only printmaker submitting hand-burnished relief prints which has been a tall order.  I learned a lot.  I still consider myself a student even if with the closing of the A6 studio I don't have a teacher. 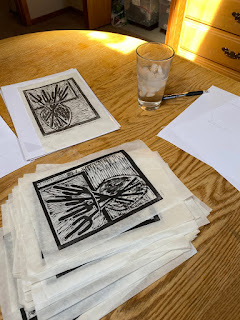 I finished printing yesterday and numbered, named and signed them today.  It's actually an edition of 40 and I almost feel bad since I'm the only student who was invited, but I did my best and I hold my head up high. The best part for me was getting back into the printmaking groove.  I've fallen prey to lethargy during self-quarantine but that's over. 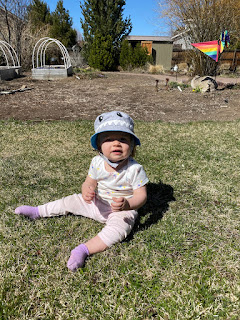 Of course it helps that this sunny little girl is here every week and now we've gotten several sunny days in a row.  Gardening cannot be far behind. 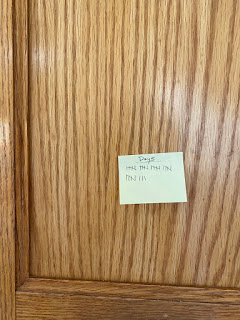 I'm keeping track of the days since I went into voluntary quarantine, and each morning I mark off another one.  Tomorrow begins my fifth week.  There were 64 new cases and two deaths yesterday so we'll still not at the turning point.  I read an essay in a recent New Yorker about how China handled the pandemic aggressively and now have lifted the quarantine in Wuhan.  Our Administration bungled this so badly, I just can't think about it too much.  People are dying unnecessarily. 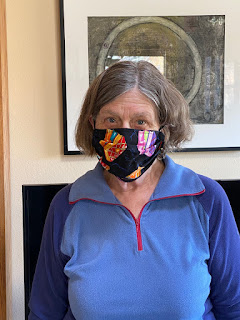 My sister-in-law Rochelle made masks and sent us two of them.  We just got them in the mail and Ian used his today when he went to Safeway.  It's hot!!  Maybe it's the body heat trapped in the mask that kills the virus. 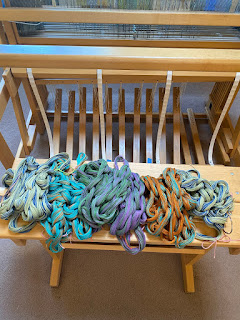 I read a helpful article that a friend found, listing things to be aware of during this crisis and helpful actions we can take.  One item was to take on a long-term project like learning to play the piano.  I don't have a piano but I haven't woven in a month either.  Bingo.  I finished winding the warp this afternoon in tide pool colors.  Sadly my inactivity has left me with weakened back muscles and I kept having to take breaks to let my back rest.  My super longterm goal will be to use my weights and get my strength back. 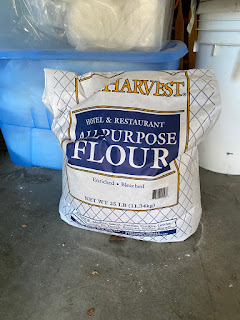 And I decided to get my bread mojo back, but it appears that a large portion of American has turned to baking as a comfort activity.  Ian called me from Costco to say that this 25-pound bag of unbleached white flour was the only flour he'd seen, did I want it?  I've always used unbleached white, whole wheat or bread flour but said - buy it!  That might be the only flour we see for the next month. 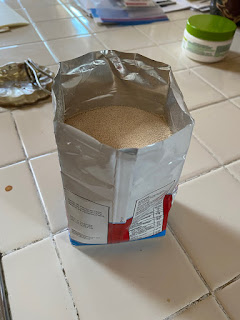 He has a list of items to look for whenever he shops, including toilet paper of course.  Yeast was always just an empty shelf, and then at his favorite grocery store, employee-owned Newport Market, he found King Arthur bread flour and this one-pound brick of yeast.  It's a completely new yeast to me as is dry mixing it with the ingredients.  I was disappointed with my first try so am going to make some single loaves from the bleached white flour to get acquainted with this altitude, cooking times and temps.  I used to bake all my own bread and I've forgotten how much I enjoy it. 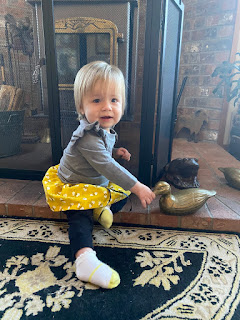 Delaney turned one on Friday.  She is my sunshine in this viral storm.