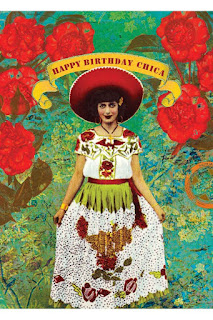 Another birthday has come and gone since my last post.  I find it hard to believe that I'm now 72 years old, not that I begrudge it.  I only have to remind myself that six years ago a catastrophic injury nearly cut my life short, so hooray - I am now 72!!  I noticed on my Blogger profile this morning that I started this blog in April 2006, over 13 years ago.  I was only 59 then, still working, still healthy with no thought at all of when I might retire.  In 2011 I took a class and became a weaver which truly changed the course of my life,  but that was still five years in the future. 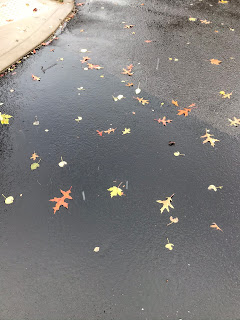 I'm lucky to celebrate my birthday in my favorite month of the year.  It's absolutely gorgeous right now, though three freezing nights early this month caused our beautiful red maple to lose its leaves almost overnight.  But there are still plenty of beautiful trees to love. 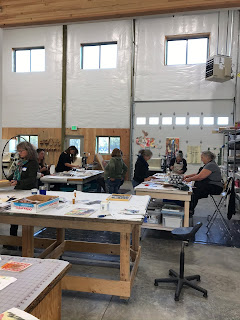 I was invited to join a group of ladies in the newly formed Studio 6000 in Sisters.  I thought A6 was the most glorious studio of all but this one is brilliant in every way. 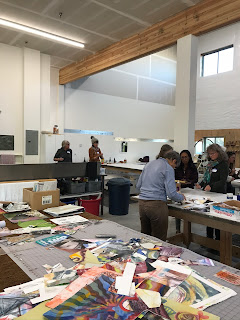 I have been invited to print here but have decided to whittle down my printmaking to relief only, which is carving images in linoleum and wood, and to find a balance between weaving and printing.  My weaving suffered from lack of time and attention and I'm ready for that to change.  Being a weaver however has opened doors to me like this event.  I guess they figure if you're an artist in one area, you're an artist period, just different.  I would never have been invited into their art world had I not had a medium I was fluent in.  When I say that weaving changed the course of my life, I really do mean that. 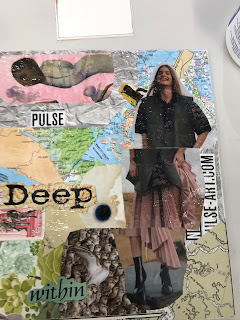 We were instructed in the invitation to find a word of phrase to use as our inspiration for our collage.  I've never done a collage before so was completely ignorant of the glue products, and there are many.  I just started cutting and gluing, follow the phrase which I adapted from the Book of Proverbs - she who refreshes others will herself be refreshed.  These will be an installation in a Sisters shop and are all priced the same, as a fund-raiser for Saving Grace, an organization that helps underserved women.  The title of my piece is "Within." 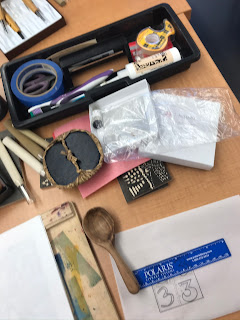 I have just about assembled everything I need for a home printing studio.  I'm just waiting for an order from Dick Blick with inks and an inking plate.  My light table arrived two days ago.  I purchased the wooden spoon from a woodturner at Fall Fest earlier this month to use as a baren and it is perfect.  I finished a four-week workshop on relief printing last week, the days are getting short, and I am ready to get to work. 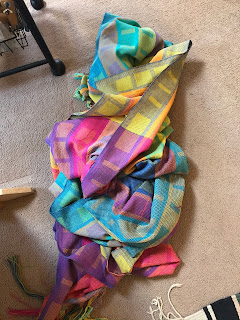 These are the last towels I will have time to finish before our guild Holiday Sale next weekend.  I'll start hemming them today and I have sold two already through Facebook.  This is our third year but the first as a two-day sale.  I haven't signed up to help and need to find out where they need people to work.  It will be at the Environmental Center again but since we open on Friday, we will be included in the First Friday Art Walk.  Break a leg!! 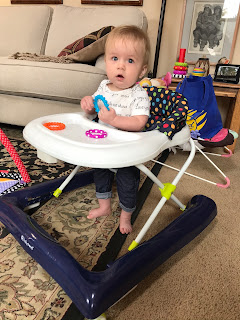 And I couldn't let you get away without a picture of Delaney who will be seven months old in another week.  She's what I'll be doing for the next two days and she makes both of us very happy.

Posted by Sharon at 8:52 AM 4 comments: Links to this post 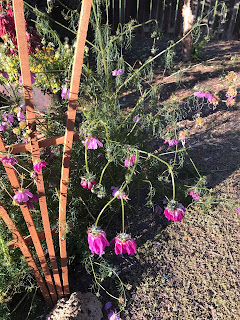 We had just one night of killer frost but that's all it takes and it spells the end of the gardening season.  I have made a note for myself of a couple of things I still need to do but all the time I've spend with my plants this summer has come to an.  It's time to turn my attention indoors 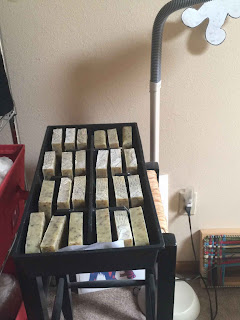 .
I've stopped making soap to sell but have continued to make it for our own use.  For the first time in the 20 years I've been making soap I let us run out.  I have a lot of supplies still, probably more than I can ever use up so have decided to make another batch after this cures in a few weeks and give them as gifts and also make sure we don't run out again. 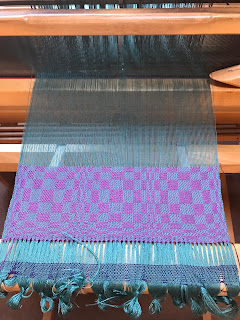 I've also designed another warp from a profile draft but don't like it nearly as much as the previous draft.  I'll take it to our weave study group and troubleshoot it with other weavers.  It doesn't have the movement I had hoped for nor am I getting the level of iridescence that I had anticipated.  Alas. 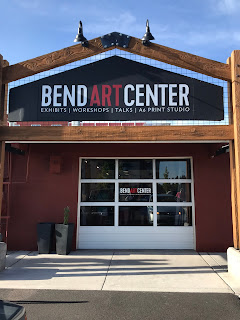 The Bend Art Center is officially defunct due to intractable financial woes.  I took this photo as I was leaving on the last day and now the sign is gone, along with the intaglio presses.  I've struggle with what's next for me as a printmaker without access to a press and have decided the solution is to focus on relief printing, both in linocut and wood. 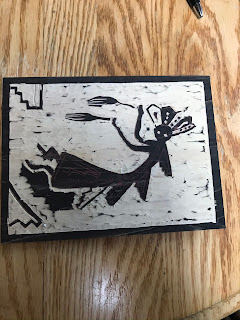 Luckily for me OSU Cascades has just developed a Community Outreach arm of education and offered several workshop classes this fall.  I'm signed up for Intro to Relief Printing, taught by Andrew Lorish who is a wonderful teacher.  It's only four weeks long so there's a lot of homework between sessions.  I need to finish this up as we're printing this Wednesday and after that there's  just one more session.  I think OSU might offer more sessions in the future - hope so!  Meanwhile I've had to order supplies so I can print at home.  My membership to Bend Art Center included ink so I just bought the first ink for myself. 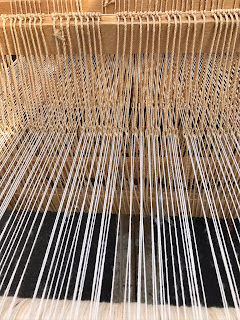 Ian and I went downtown for FallFest today and I thoroughly enjoyed the beautiful day, the first one in weeks in the 70s.  After that it's back to the 50s.  It was perfect!  I was arrested by the weaving in this booth because for starters, the loom is made from rudimentary materials and couldn't be more simple.  The heddles are just carefully tied sisal. 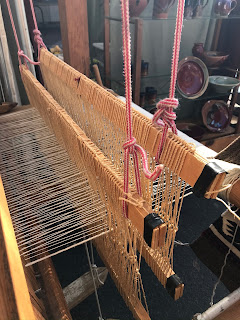 The weaver told me that he and his brother built the loom.  I think it's good to be reminded that beautiful weaving doesn't require expensive equipment.  I bought my 8-shaft loom new for $2,000 and am no were near the weaver as this guy. 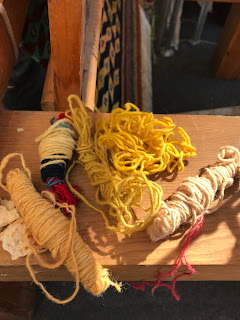 The yarn is hand-dyed by his mother and sister from Navajo Churro wool, which they purchase rather than raise the sheep themselves. 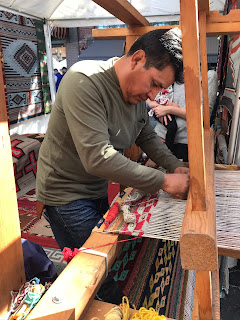 He runs the booth entirely by himself and weaves (and talks) all the time he's not showing the rugs. 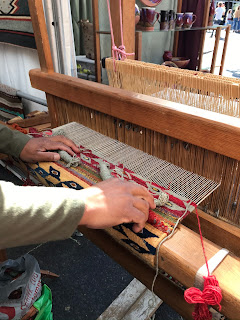 He didn't mind my watching him weave, so I did.  When we walked by his booth on our way back to the car, he had serious buyers and was pulling rugs off the display wall for their viewing.  I was happy to see their attention to his wonderful work..  The rugs are classic Navajo style, thick and beautiful.  I left feeling refreshed after an afternoon looking at all of the creativity.