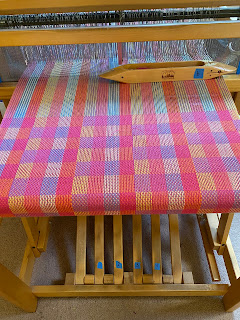 I've been playing around some more with turned taquete.  I'm getting a plaid of sorts. 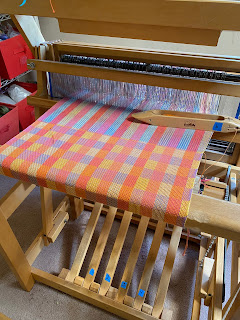 I started this warp thinking that we might be able to have a guild holiday bazaar after all, but now I realize I won't be here, since I need to be in Reno for my daughter's surgery.  I attended our guild's rigid heddle loom study group via zoom today and got infected by their wreckless design aspirations. They are all about texture and color.  I'm having second thoughts about taking classes for difficult structures and think I may need to return to my original love, color and texture. 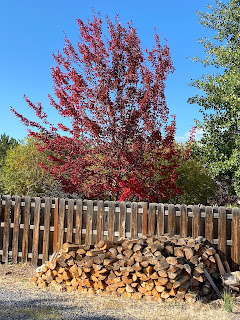 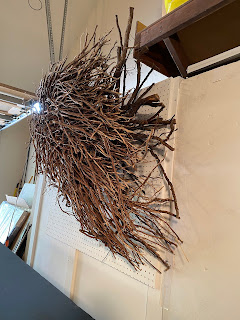 Meanwhile, I've been participating in Pat Clark's root project.  Pat has been a powerful and unifying force in our local art community and I'm super fortunate to have become a part of that group.  I didn't get the splint off my hand until Monday so signed up for a sketch time with her on Tuesday.  That's because Pat is in hospice and sketch times with her are limited.  We are sketching this root that was extracted from her yard and has been hanging in her garage for the past two years. 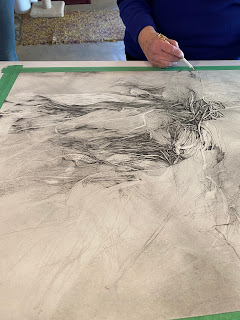 This is Pat's sketch.    I gathered up my things to leave at the end of my session and she took me aside to wish me the best with my family and said, that when life had thrown her a curve, she had learned that the word she needed was "adjust."  I treasure that piece of wisdom. 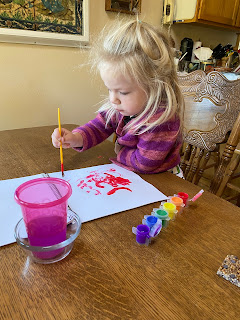 We have another artist in the family. 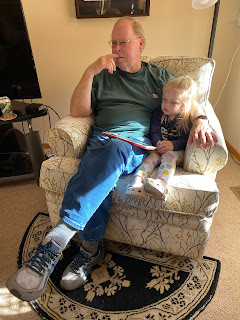 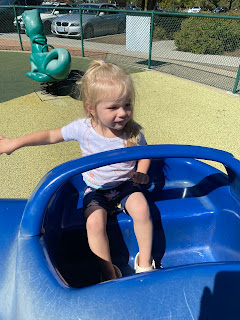 I took Delaney to the park this afternoon, hoping to tire her out for a long nap.  It's a beautiful day and wonderful to be out from under the choking smoke. 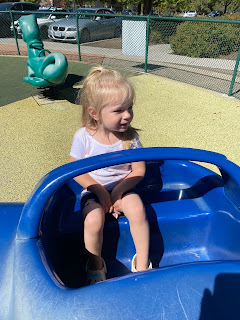 She is just starting to get the hang of the play equipment, but the slide still baffles her. 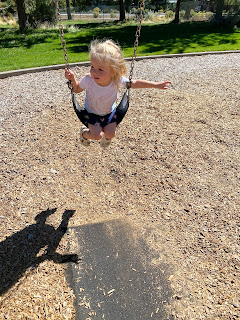 She absolutely loves the swings.  It's her favorite and she squeals "Whee) on every forward swing.  And here is where I tell you the bad news.  Her parents have decided to sell their house and move back to Reno. After watching Delaney for 2 1/2 years, this is tough to swallow.  They have a list of reasons and I understand where they're coming from, but I don't like it.  I plan to enjoy her right up to moving day. 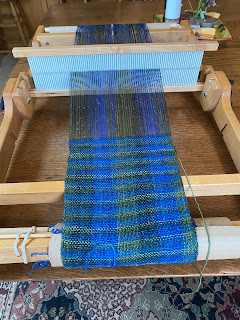 I'm lucky to have an engrossing hobby to help me move forward.  I checked out this rigid heddle loom from the guild equipment library and made this scarf with sock yarn as my first project.  It turns out someone else wanted to borrow it for a class, a beginning weaver, and so I hurried up to finish this and return it.  It was fun but I don't know that I'll be buying one anytime soon.  A Girl Scout is collecting 100 scarves for a badge so I put this one in that collection. 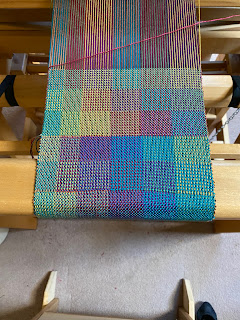 And I'm fortunate to be in the middle of a shadow weave workshop with Jennifer Moore.  I bought the yarn as a kit from Lunatic Fringe and chose the autumn colorway.  We had the option of 5/2 and 10/2 yarn.  Because of babysitting I am only able to attend two of the four recorded sessions of the instruction and they have been excellent.  I am able to replay spots that confuse me.  We had the option of using a four-shaft loom or an 8-shaft loom.  With the splint on my wrist I opted for four-shaft and 5/2 yarn or the class, then will do the eight-shaft later. 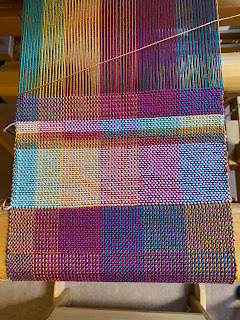 During Delaney's nap today I experimented with supplementary yarns, ones that weren't part of the kit.  The last session will be Thursday but the kids have asked me to babysit because they're going to a funeral in Reno on Friday.  I'll watch the instructions and will have all day Friday to weave, or until my back gives out. 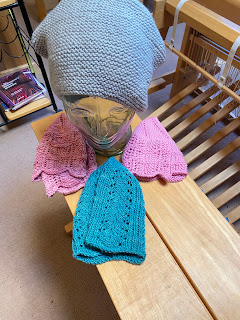 I'm still knitting chemo caps and have four done so I need to drop them off.  There's still quite a bit of the yarn from Triana so I think I'll have enough for a dozen by the time I'm done.
And here is where I tell you the bad news.  Delaney's parents have decided to sell their house and move back to Reno. After watching Delaney for 2 1/2 years, this is tough to swallow.  They have a list of reasons and I understand where they're coming from, but I don't like it.  I plan to enjoy her right up to moving day. Matt dropped Delaney off the morning of the 31st and said he had an announcement to make.  I actually thought he twas going to tell me that they were separating.  I've sensed heaviness from both of them for at least a month.  But it's not a health issue.  I have to remind myself of the things their news is not, a crutch for now.
That afternoon my daughter called with even worse news.  She is going to need open-heart surgery and they're hoping to be able to do it in October.  It's called Bicuspid Aortic Valve Disease and it's a birth defect.  Her father also had this surgery.  I've lost sleep over this and somehow it makes Delaney's move a little less traumatic.  Chrissie has to stay in the hospital for a week and another six weeks at home after the surgery.  I'll go down as soon as she wants me there.  I will be so glad when this is behind us, the sooner the better and before the snow flies.