Visit to the Library 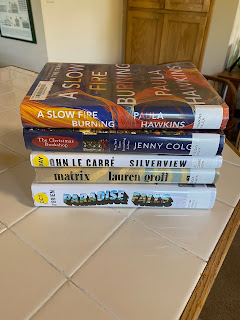 My granddaughter Alexia and I paid a visit to the library last week, mainly to pick up the two books she had placed on hold, but I came home with some books too, two that I had already read but didn't remember.  That's not a good recommendation at all.  This is Alexia's last summer visit with us as she moves into her dorm room next month to start her freshman year at the University of Nevada, Reno.

My eye was caught by a book on the "new books" display and it was so good that I read it in three days.  Paradise Falls: the true story of an environmental catastrophe.  Most often the nonfiction books I enjoy fall into the Dewey classification of the 900s, the subject classification for history and geography.  I avoid the 300s which is the social sciences, and especially 364 which is true crime - yuch.  This book was 363.738, almost a sure thing that it would be boring but I liked the cover.  What can I say?  Sometimes I can be very shallow.

I didn't realize until I got home that this was the retelling of the Love Canal and it wasn't boring at all.  Beginning in the 1940s Hooker Chemical began dumping barrels of unwanted chemicals into an old abandoned canal. They made no record of the contents once they were disposed of.  In 1977 residents in the Niagara Falls subdivision, with a playground and affordable homes, began experiencing pungent odors inside their houses.  Lois Gibbs, a housewife with no education past high school, began to organize residents and appeal to the authorities to fix the problem.  I realized as I came to the end of the book that ll homeowners agitating for remediation were women and all the authorities were men who dismissed them as "just" housewives.  Sound familiar?

Dr Beverly Paigen, an outspoken scientist, saw the crisis and led toxic waste studies in spite of clashing with state officials who subjected her to a harassment campaign that drove her and her husband from their major research posts at what was then Roswell Park Memorial Institute.  They relocated to California where they continued their research, and it wasn't until 1992 that she was vindicated.

Not all of the protestors were residents.  Sister Joan Malone was an activist who approached protest a different way, by buying stock in offending corporations so she could vote in the annul meetings.  Keith O'Brien, author of Fly Girls, has written a nail biter - two thumbs up!