Can't we do better than this? 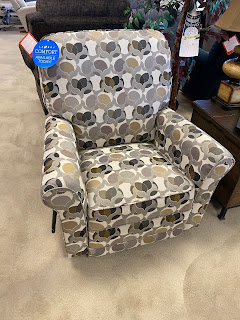 We decided to buy a bigger chair for the front room.  Our current chair is too small to hold us and Delaney when we read to her.  I went to Lazy Boy and fell in love with this chair. 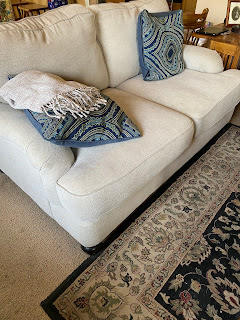 I measured the area and the chair was just too big.  Plus as much as I loved it, it didn't seem to fit in. 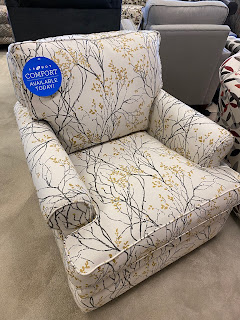 I went back and bought this one instead.  We fight over who gets to sit in it.  We might need a second one, after we pay for this one :-) 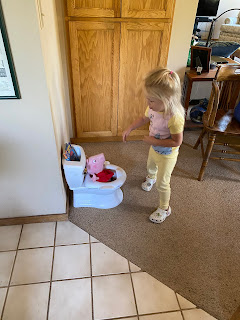 Potty training Delaney is still in the thinking stages. 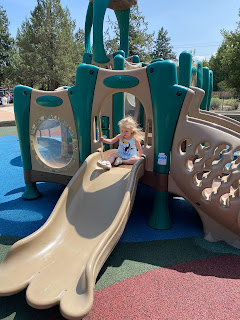 I took her to the park that's just a mile from here.  She loved it and I had to tear her away after an hour.  I'm surprised at how well preschool kids communicate without a whole lot of language. 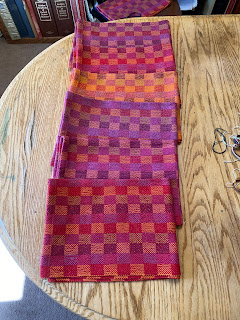 I finally finished some dish towels which I'm hoping will do well in our guild holiday show and sale.  But I need to try something new. 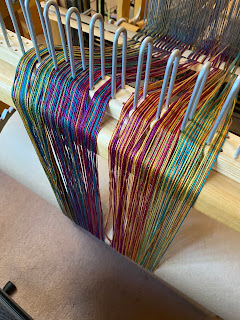 For now that something new is Jennifer Moore's double weave class that starts in another week.  Getting ready has been hard on many levels, not the least is the limited use of my hand.  I ordered yarn kit from Lunatic Fringe, the most expensive yarn I've ever purchased.  It's 5/2 mercerized cotton and it's  a devil to work with, the way it wants to spiral and corkscrew.  It's awfully pretty and awfully difficult.
Covid has placed our hospital in crisis mode once again and the governor has sent in nonclerical national guardsmen to help with the overload.  They've announced that 98% of those hospitalized are non-vaccinated.  The break-through infections have us masking up again, sigh.   Can't we do better than this? 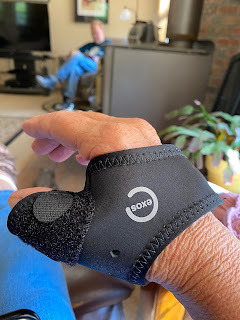 I fell into a creek while on a hike into Todd Lake when Alexia was here.  I got very wet and jammed my thumb.  When it didn't get better after a couple of weeks I went to Urgent Care at our medical clinic.  They diagnosed Gamekeepers Thumb and put a giant splint on my forearm and referred me to The Center, the orthopedic care facility.  I took the splint off and waited.  My thumb was still sore and weak.  Finally last Monday I got called in to see Dr Holt.  He said, yup - you have Skiers Thumb.  It's the same thing as previously diagnosed but he's young and we don't have gamekeepers here in Bend.

I got called that afternoon to see if I could take an MRI appointment the next morning at 7:10 and I said sure!  Then I got called Thursday to see Dr Holt again and was fitted with this handy little splint.  He was surprised by my MR which shows a partial tear.  I have to wear this 23 1/2 hours a day until September 20 and hope to avoid surgery.  I can knit simple things but weaving isn't workout out yet. 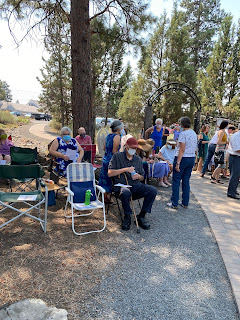 The reason I wasn't baby sitting that Thursday is because I was scheduled to take a warp painting class but a friend died on August 3rd of brain cancer and the celebration of life was scheduled for that same day.  The service was outdoors in the Prayer Garden at our church and in spite of being 99 degrees, it was surprisingly comfortable.  Triana was a prolific knitter and all of our knitting group has received yarn from her stash.  Some are knitting toys for the pediatric ward at the hospital because toys were Triana's speciality, she said, because they don't have to fit anybody. 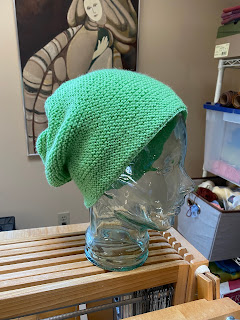 I've decided to knit chemo caps since I hate sewing toys together.  This is the first one I've finished and it's from acrylic.  It's the Rikki pattern in Ravelry and since over 12,000 people have logged in as knitting it, I figured that was as good a recommendation as any. 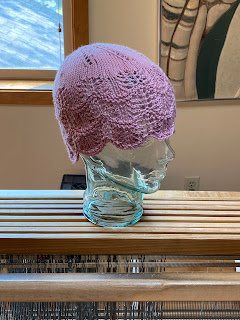 This is the second cap I've finished using the Foaming Waves Chemo Cap, also from Ravelry.  The yarn is Debbie Bliss' Cashmerino and feels very soft to me, but I'm reading that wool can be irritating on the bare scalp and that acrylic and cotton are the preferred yarns.  I'm going to take both of these into Oncology this week and get their advice. 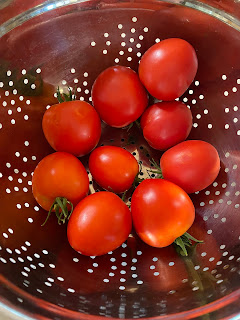 Our tomatoes have started coming in this week.  We only planted Early Girls and it's paying off.  BLT sandwiches are what's for dinner tonight! 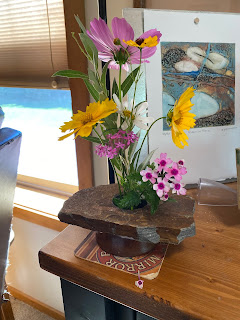 I sowed wildflower seed in a little strip of cleared dirt along out eastern fence and they're also doing quite well.  A Japanese friend gave me this ikibana vase and explained the sun, moon and earth order of arranging flowers.  I have had fresh flowers in the house for the past month and absolutely love them. 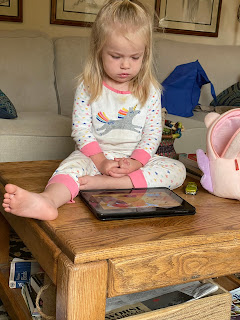 Delaney loves Disney Now and especially a show called Bluey.  We clear off the coffee table on the days we watch her and it's usually covered with toys and books, but she got sucked into the story and parked herself on it.  I love how she folds her hands when she's engaged.  Language is slowly picking up.  I had stripped the sheets from our bed to wash them.  She picked up a pillow and handed it to me saying, "make the bed."  Yes Ma'am!!  We'll be starting potty training very soon - yikes! 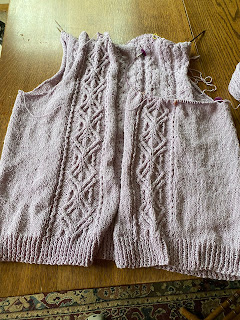 I've been knitting on a cardigan pattern from the winter Vogue Knitting issue and had been having misgivings about the size, hoping I had enough yarn.  I kept knitting thinking that surely it would be fine.  This is when I realized I didn't have enough yarn for both sleeves, so I took stitches off the needles and measured on the kitchen table.  It was way off.  At some point I had begun to loosen my gauge and it was a couple sizes too big. 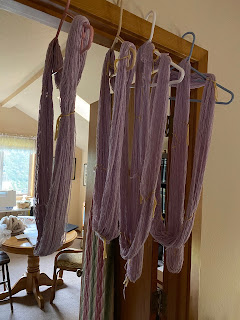 There was nothing I could do but start over.  Actually frogging and reconditioning yarn is pre-starting over.  It's been my Olympic knitting and I am halfway to the armholes right now.  It's a complex pattern and I recognize that it probably won't be a garment before next year. 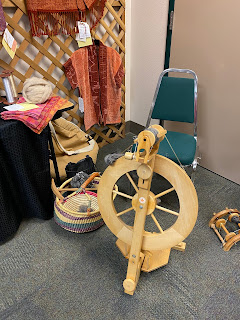 The county fair shaped up at the last minutes which left everyone scrambling so I was really impressed at what we were able to do for the fiber arts exhibit and demonstrations.  I haven't been weaving so the bright towels on the left were all that I had to enter for judging.  I didn't deserve a ribbon and I didn't get one.  But attendance was surprisingly good considering the short notice and high temperatures.  It was the 100th birthday of the fair and I think they were loathe to miss another year after last year. 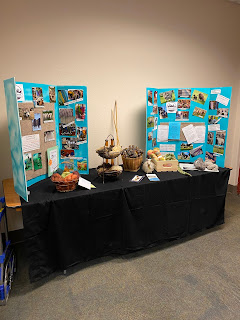 Our guild's spinning study group put together this "sheep to shawl" display along with information on rare breeds and wool samples that said "touch me."  People seemed to be happy to have their fair back and were curious, though all entries were down, all except quilts which were more than they had ever had.  We think it's because the Sister's quilt show was last month and they accepted half as many entries as usual which meant that quilters were happy to have a place to display their work. 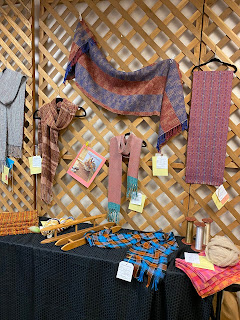 Our displays were attractive and it was nice to be indoors, which I'm sure is what our visitors thought too, with temperatures approaching the century mark.  Some of the displayed pieces were submitted to be judged but we also beefed up the visual appeal with items "for display only" like my turquoise and copper scarf on the table. 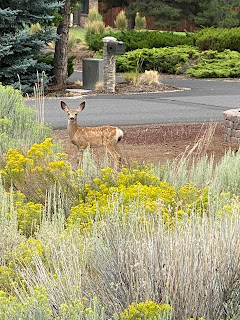 We've had returning deer these past couple of weeks.  I seemed to be the only one who hadn't seen the new neighborhood fawns but then a couple of days ago the twins shot by me at the start of my morning walk.  One raced across the street but this guy stopped to double check before scampering off. 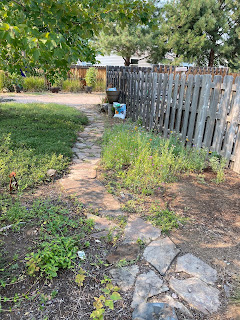 And on the other side of our fence, the wildflower seed that I sowed have taken root and are producing cheerful little meadow flowers.  I thought I distributed the seed evenly but it looks like I tipped up the bag and dumped it out.  I think it will even out next year but it's sure a cheerful addition to our yard right now.  According to the package the annuals will flower this year and next year the perennials will bloom. 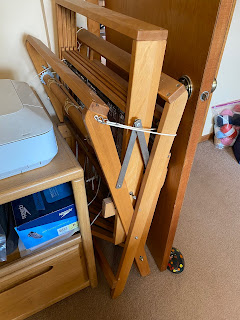 Alexia has been displaying a lot of interest in weaving this year and is asking me really intelligent questions.  At first I was thinking I would order a 16" rigid heddle loom and having it shipped to her but then I remembered this Dorset loom that I bought to use in workshops.  Since discovering zoom weaving workshops, I've decided to skip the workshops where I have to fill the back end of my car with equipment and unload, reload, unload, etc. It occurred to me that its a perfect starter loom for Lexi.  They're coming up in October to pick it up. 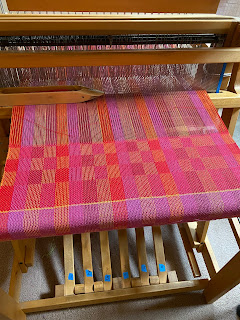 With all the time that pandemic and quarantine have provided me, I have done just about no weaving.  I finally have a warp on one of my looms.  Instead of trying to learn something new or use workshop information, I've defaulted to my old friend, turned taquette, and boy does it feel comfortable to be on my own home turf. 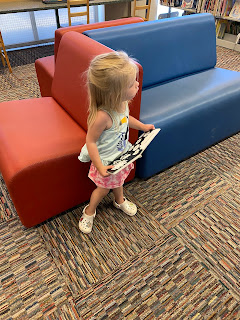 I've started taking Delaney to the library once a week.  She gave up naps when she outgrew the Pack-n-Play so on the recommendations of her parents, I take her for a car ride after lunch which causes her to fall asleep and take a two-hour nap.  The trick is to get to the library without her falling asleep first!  The conditioning is so good that she falls asleep within the first mile and the library is three miles from the house.  It's tricky.