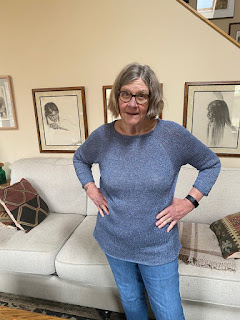 As of today I've been self-quarantined for three weeks, and I consider myself fortunate to have my life pretty much as I know it.  I have several Zoom sessions each week, including my book group tomorrow.  I thought with so much time on my hands, I'd finish reading that stack of books, carve new woodblocks, warp both looms, okay, all three looms and to catch up on emails.  The only thing I can do while watching a baby is knit so here's another finished sweater.  I don't know where the rest of the time goes. 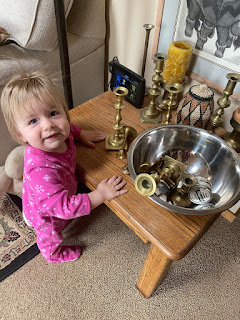 We still watch Delaney two days a week, Thursdays and Fridays, and she brings so much sunshine to our pandemic days,.  This is a new game - put all the brass candlesticks into the bowl and then take them out again.  I really don't know how I've managed to acquire so many of these things but they're baby-safe and she's welcome to play with them. 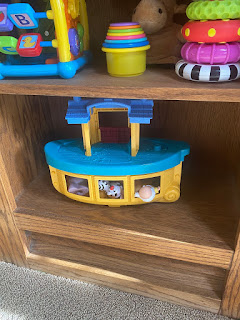 Her first birthday is this Thursday and there will be no party.  We thought about getting a cupcake for a smash cake but declined knowing that sugar will throw her off and she would be crabby on Friday.  We ordered this Fischer-Price toy for her but now it's just a new toy. A friend suggested that I wrap a box in tissue paper which will be just as fun as opening a gift, even more so since the paper tears in pieces.  She's crawling and walks by holding onto things. 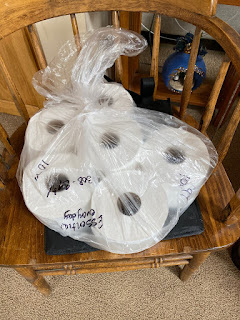 I don't what it's like where you are but the shutdown is affecting paper products, primarily toilet paper.  We got this six-pack at a locally owned grocery store.  They contracted with a restaurant supplier to stock their shelves for the next four months.  The packaging is theirs.  We laugh but it's a relief to restock our supply. 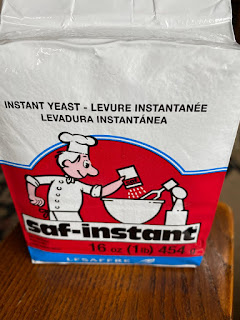 Another odd thing missing from shelves is flour and yeast.  Ian called me from Costco last week and said there was some flour, a 25-pound bag of bleached white flour for $6.  I said - Buy it!!  Who knows when we'll see another bag of flour, because next week that might be another empty shelf.  Yesterday Ian found bread flour and compressed yeast at Newport Market, where he got the toilet paper.  This yeast will make 96 loaves of bread and I've already promised to share it with friends. 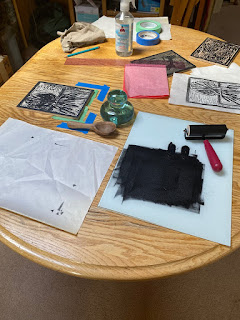 Two or three months ago I was invited by Pat Clark to participate in a print exchange as a celebration of her 85th birthday in May.  It was originally estimated that there would be 30 participants but that list has grown to 40.   I've allowed so many things to get in my way and now I'm down to the wire.  The deadline is fast approaching.  I finished carving my woodblock last week. 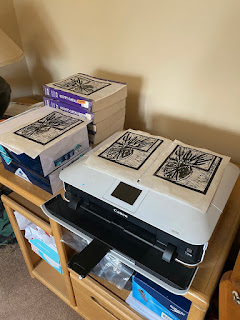 It's hard to feel creative with the gray skies and there's an international crisis in place with an unknown outcome.  It was lightly snowing on my walk this morning!  Those are all excuses.  I don't have access to a press any more so have to print using a baren.  I'm pretty sure no one in their right mind presses 40 prints with a hand baren, but who said I'm in my right mind?!!  I got a ten prints completed and had to clean up because the block was collecting ink.  I had to make me get back to work, but it sure felt good.
Posted by Sharon at 5:22 PM 2 comments:

I made a screen shot from the conversation I had with my granddaughter yesterday.  I know my daughter is worried too.  She texted me several days ago to say that Ian and I are her favorite old people, wanting us to reassure her that we're staying home and washing our hands a lot.  Today ends my first week of self-quarantine but Ian has gone out for groceries on several occasions.

Adjustments and accommodations are continually developing. Sunday was a unique experience as I attended church, live streaming on my phone, from the comfort of my living room wearing my pajamas.  There has been a ground swell of volunteers offering assistance to the homebound, to pick up prescriptions or groceries.  The items I've been weaving would have been for sale at Fiber Market Day the last Saturday of this month but it's now rescheduled for June.  Everything but grocery stores, gas stations and restaurants offering take-out of delivery are closed.  Our local yarn shop is converting her inventory to on-line sales for shipping or pick-up.  The local economy is being hit hard.  Oregon reported 18 more cases today, bringing the total up to 65. 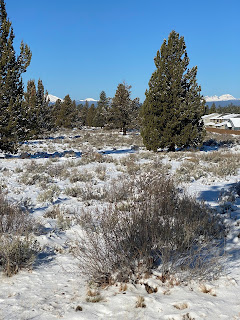 It was an utter joy to awaken to sunshine this morning. The past several days have been gloomy and gray with 5" of much-needed snow.  However, the ski resorts can't enjoy it as they are closed for the rest of this month.  I'm surprised at how uncomplainingly compliant people are.  Melissa told me that the police were called out to her Costco in Santa Clarita because customers had turned violent and combative.  Ian went to our Costco yesterday and remarked how nice everyone was each other, but there's still no toilet paper on the shelves. 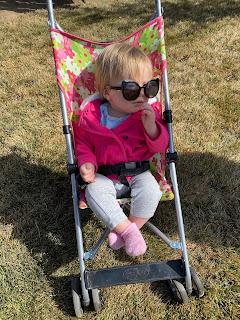 We had a couple of warm days last week and Delaney and took our first stroll of 2020 on Thursday.  This is her movie star look.  She'll be 1 in a couple of weeks and her Reno family was planning to drive up for the celebration.  I haven't heard of any change of plans but her other grandmother has an underlying medical condition so I think this also will be postponed.  I realized that our book club is going to have to reschedule too.  One day at a time.
Posted by Sharon at 4:28 PM No comments:

May You Live in Interesting Times 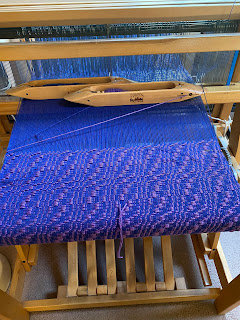 This is the second table runner on a warp intended to produce five runners for the sale the end of this month.  I ruined the first one so this is the first one that is salable. 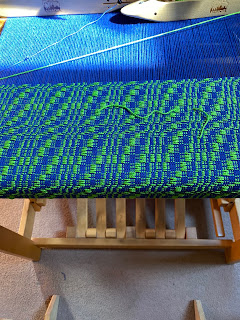 This is the third one and it's what I'm currently working on and am only working on this loom until the deadline is passed, then it's back to Summer and Winter again. 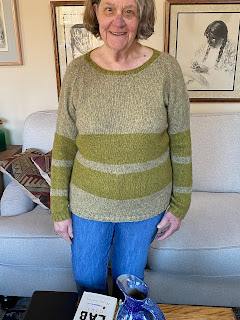 My disaster sweater turned out much better than I had expected but I need to wear a t-shirt underneath - it's itchy!  It actually looks better than this and it's not oversized when worn with a tee.  I wore it to knitting last week and when I drew attention to my completed project, the group was surprised - said they didn't realize it was hand knit.  Or maybe they were just being nice :-) 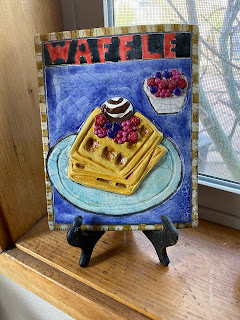 I saw this wall hanging on Facebook last week.  We've purchased quite a bit of pottery from Joe Winter but his wife Shiho is also a potter, except all her work is hand-built.  She posted a picture last week of six little wall hangings on Facebook and I knew I wanted this one the second I saw it.  I reacted quickly for the buy.  Joe said, "the early bird gets the worm" - yay me!! 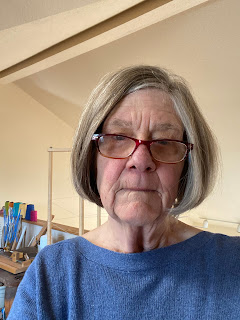 My hair has finally grown long enough after that crazy haircut 18-months ago that my new hairdresser has finally been able to style it.  It's still pretty curly but at least my hair finally looks like something I recognize in the mirror.  I need to work on my selfie skills.  I am having cataracts removed next month and wonder if I'll need reading glasses afterwards.  I still haven't decided if I'll have both eyes corrected for distance or mono vision, which is one close and one distant.  I do that with contacts but I'm not sure I want that correction for the rest of my life.

I forgot to take any pictures of Delaney recently because mostly I take videos to put on Facebook for her Reno family.  Delaney turns one in three weeks and the whole Reno gang will be here for the celebration.  She still isn't great at crawling but it spending more time standing to play, and her playing in one place makes her a whole lot easier to watch.  We'll need a gate for the stairs before long.  We've been putting things on the risers that we don't want her to play with but they're not going to be safe for much longer.

Lots of uneasiness here in Central Oregon as we watch COV-19 on the world stage.  The main office of Smart (Start Making a Reader Today) announced on Monday that reading to kinders is suspended until April.  And today I was asked as president of the local weaving guild to think about cancelling the April meeting.  I'll let the members decide at the meeting next week.  Lots to think about.
Posted by Sharon at 2:51 PM 3 comments: 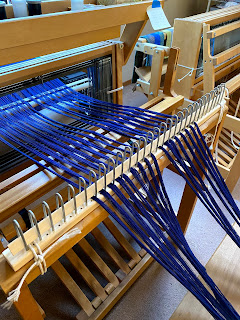 I still haven't found a way to access all my photos in Blogger but I do think I've found a backdoor. Meanwhile, this is my newest piece of weaving equipment.  It's called a hoop raddle and it's made by Glimakra, the same folks who made the lease sticks that I bought last year and love.  I called Patty Huffer, our weaving guru, and asked her how to assemble and use this, as it's quite a bit larger than the one I'm replacing.  She had me put in on the front beam, and voila, I had the loom dressed in record time.  Worth every penny! 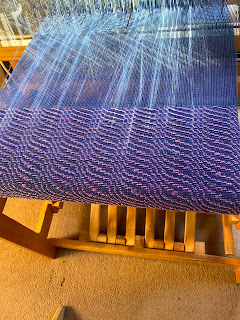 I'm weaving Overshot in these two colors.  The whole warp is for table runners and each one will have a different colored weft.  I misunderstood the directions and the first runner is a dud. I'm weaving a corrected pattern now which is stunning.

Any photo I want to use I have to "heart" on my phone and in a couple of days it shows up in a folder I can access in Blogger. I figured this out earlier this week and it will be a while before I can post.  At least I'll know how many days I have to allow between taking a photo and being able to blog with it.  Microsoft and Apple do not play well with each other, but I'm not dead yet. 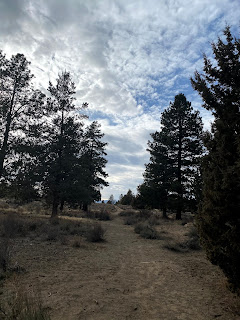 February was warm and dry, and although the Cascades have gotten a fair amount of snow this snow year, we are being warned to prepare for water rationing if we don't get some healthy storms.  Plants were fooled into thinking it was an early spring and then it dropped to 19 last night and now they have to start over.  Such is life in the High Desert.  Being a volunteer at the High Desert Museum has given a fresh appreciation for the struggles homesteaders had to overcome in order to merely live. 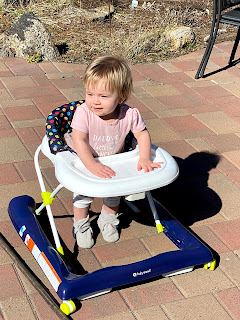 We've had a couple of days in the mid-50s and were able to enjoy the outdoors.  Delaney and I went out for about a half hour to keep Grandpa company while he cut firewood.  I know the winter sun is cooler but I don't want to be the one sunburns my granddaughter.  The breeze ruffled her hair which perplexed her and she kept reaching for it.  So many new experiences await her.

That's not all I have to say but that's all the pictures that I've been able to access.  If my theory is right, I'll be back to bore you again shortly.
Posted by Sharon at 4:22 PM 4 comments: