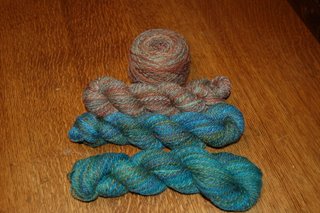 I get up a half hour early each morning and spin, about as long as it takes me to drink a couple cups of coffee. I find it a painless way to arrive in the day. Once I had the results from our dye day, I was anxious to see what the fiber would look like as yarn. I found myself spending more time than I had intended and drank several cups of cold coffee before I put my foot down and made myself behave. I don't think my boss would understand if I were late.


I spun the Southwest-colored roving first as I liked it the most. I divided the roving into two and spun on two bobbins. I worked from four semi-equal strips of the roving because I wanted to keep the color runs short. But when I plied and fulled, the yarn seemed to have a barber pole effect.

I spun the roving of four blues and orange spots next. I still divided the roving into two and spun on two bobbins, and on the first bobbin, I worked with the same four strips. But on the second bobbin I worked from one end of the roving to the other in an attempt to have longer color runs and avoid the barber-pole. On the next roving, I’m going to see what happens when I only spin from one end to the other. 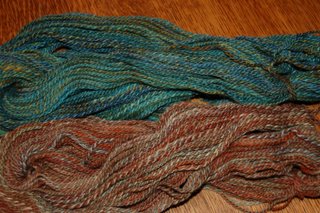 Of course, the barber-pole look might look great knitted up. I’m not starting on samples until I finish that infernal and eternal sleeve. It’s the last part of a sweater in the round, so has gotten quite large, heavy and hot. On second thought, samples sound pretty good. 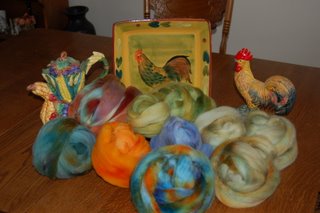 My early attempts to dye roving were mostly random applications of color and mooching off of other people's dyepots during dye days. Lately I've been trying to use photos and art to choose ahead of time the colors I would like to have in my finished yarn. I'm learning though that how fiber looks as dyed roving isn't necessarily how it's going to look as finished yarn, or even as knitting fabric. So much to learn.

My favorite from this dye session was the garnet and tourquoise on the top left. I selected three colors and poured them across the fiber in the dye pot, simmering for a half hour. It's looks so Southwest. It spun up more muted than I had anticipated. The blue and orange on the bottom center was applied to wet roving, rolled up in Saran and steamed for twenty minutes. Using syringes, I injected four shades of blue and spotted with orange. I'm happy with it as yarn and how I spun it, but that's the subject for another posting.
Posted by Sharon at 11:23 AM 2 comments:

Smoke gets in your eyes

Somehow it seems perverse to be knitting woolen caps in June when the air outside is choked with smoke from multiple wildfires. I love making the caps because it gives me the chance to knit with samples of handspinning that wouldn't be enough for a project otherwise. Even better, I get to sell them.

We are supposed to have more thunderstorm activity today. I can't think this is good news. I woke up this morning, knowing that today I will make myself finished the last 20 pages of White Oleander by Janet Fitch. This is yet another Oprah book. Are they all so angst ridden? Each time I read one, I say I'll never read another. Yet here I am, reading another. I picked it up from the library booksale. I'll decide tomorrow if it was a good deal.
Posted by Sharon at 10:55 AM No comments: 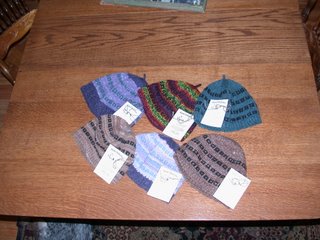