I've been reminded a couple of times that it's been while since I've posted anything about books that I have read.  I've gotten caught up in taking care of business during the past couple of years as weaving guild president as well as trying to deal with family stuff.  It's time to get back to me stuff, so in a step in that direction, here are a couple books that I've read this year that I can recommend.

Home Made:  A story of grief, groceries, showing up -- ad what we make when we make dinner,  by Liz Lauck

The author was raised in a home where volunteering was valued so this wasn’t her first gig. She and her father had talked about a program where she would cook one night a week for the young men who lived in the group home her father had helped found and where he still worked. After his early death, she wasn’t sure she could go through with it, but with the blessing of his partner and co-founder Gerry, she inaugurated her program.In her words, “this book is my story about dinners and conversations with six boys, or twenty-seven boys, living in foster care who were assigned to a group home run by the human services agency my father had confounded, there as a volunteer. It’s a story about the interconnectedness of food and memory, and community service and community care. This is also a story of modern America.”There was a race against the system to get these young men who came in their mid-to-late teens be prepared for living on their own after they turned 18 and were released to whatever came next, another residential assignment or independence. Their assignment to the house was supposed to be transitional but sometimes there was no where for them to go and Frank was “transitionally” there for four years. He didn’t even have a birth certificate so his celebration dinner was whatever year he decided he was. You can’t help becoming attached to these lost and lonely boys and I absolutely fell in love with Leon.This is a story of the interactions of the boys with the author over the dinners and it’s a story of food. When they were trying to decide what their dinners would look like, Hauck suggested they allow an hour for cooking and an hour for eating. Leon quite honestly asked, why don’t you cook and we eat? Expect to be charmed to pieces and expect to cry.

Between Two Kingdoms: A memoir of a life interrupted, by Suleika Jaouard

Suleika Jaouad developed a maddening itch during her senior year of college, so maddening that she subconsciously was tearing at her skin, causing oozing sores. A Chinese herbalist thought it was a parasite she had picked up while studying abroad. A doctor thought it might be eczema and prescribed cream as well as anti-anxiety medication. And then came the naps, hours worth.Somehow she managed to get by, graduated and moved to New York City where she scored an unpaid summer internship. Even with nine roommates and a part time job, she was broke and tired all the time, just getting by with the help of caffeine and uppers. She knew she needed to leave, and since French is her first language, she found a paralegal job in Paris. Days before leaving the City she met Will while sharing a taxi, and who would become the love of her life.Paris wasn’t the fantasy life she had imagined, However, she did start up a regular correspondence with Will that led to him going to Paris for a two-week visit, then back home to pack up and move. She was still plagued by fevers and fatigue even as they were growing into their relationship. During a routine visit for birth control pills the doctor told her she anemic and gave her an iron supplement. Fast forward to the diagnosis of undetected lymphoma which was now leukemia followed by years of radical treatment, searching for a cure.After her final chemo treatment she decided to embark on a 100-day journey that would take her to the Pacific Ocean and back, a voyage of rediscovery to find herself, looking for the new normal - but first she had to learn to drive. A friend loaned her his Subaru for the trek. During her years of treatment she wrote a newspaper column and her goal was to visit some of the people who had written to her. The last quarter of the book was a chronicle of these visits and it was fully my favorite part.She came away from her visit with Ned, recognizing that “there is no restitution for people like us, no return to days when our bodies were unscathed” and that “recover isn’t a gentle self-care spree that restores you to pre-illness state.” He tells her that he still struggles to carry the collateral damage of illness, and she realizes that they may always be. A doctor at Sloan Kettering explained that she was experiencing post-traumatic stress disorder - the horror of cancer didn’t end on the last day of treatment - it says, don’t get too comfortable because one day I’m coming back for you.Following a purification ritual on the Pine Ridge reservation she says, “I’m realizing that if I am to cross the distance between near-death and renewal, instead of trying to bury my pain, I must use it as a guide to know myself better. In confronting my past, I have to reckon not only with the pain of losing other people but also with the pain I’ve caused others.” In the last visit of the book Katherine tells her “That’s all you can do in the face of these things. Love the people around you. Love the life you have. I can’t think of a more powerful response to life’s sorrows than loving.”

City of Thieves, by David Benioff

This was selected by my book club or I know I would never have chosen it nor would I have finished it, but it's a book that won't leave me and parts of it pop into my head from time to time.  I recommend it as a fine piece of literature, not because it's a fun read.

"During the Nazis’ brutal siege of Leningrad, Lev Beniov is arrested for looting and thrown into the same cell as a handsome deserter named Kolya. Instead of being executed, Lev and Kolya are given a shot at saving their own lives by complying with an outrageous directive: secure a dozen eggs for a powerful Soviet colonel to use in his daughter’s wedding cake. In a city cut off from all supplies and suffering unbelievable deprivation, Lev and Kolya embark on a hunt through the dire lawlessness of Leningrad and behind enemy lines to find the impossible.By turns insightful and funny, thrilling and terrifying, the New York Times bestseller City of Thieves is a gripping, cinematic World War II adventure and an intimate coming-of-age story with an utterly contemporary feel for how boys become men." 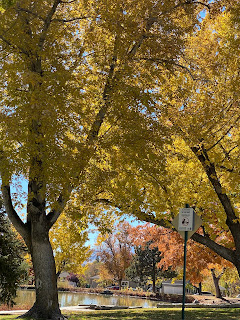 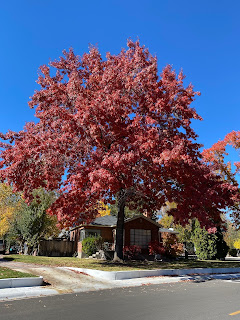 I've been in Reno since October 27th, in time to see the spectacular show of the turning leaves.  These photos are from our old neighborhood but it's like that all over the Truckee Meadows basin.  I'm reminded of Walter Von Tilburg Clark's book, the City of Trembling leaves.  The Clark Administration building on campus is named for him.  I've been gone from Reno for six years after living here for 40 years.  I was surprised by how much I enjoyed revisiting the city. 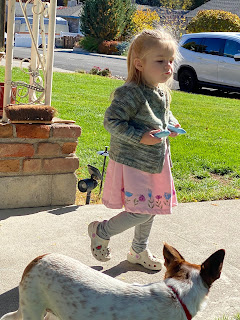 I've had a couple of visits with Delaney but her other grandmother has been sick so I might have to be content with that until we come back next year for Alexia's high school graduation.  Delaney loves her new sweater. 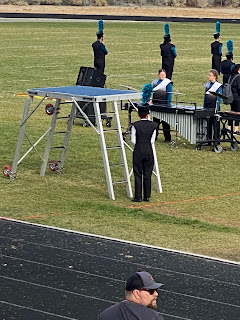 I wanted to see Alexia's band performance.  The different high schools have taken marching band into almost the same level of sports.  I have wanted to see her do high school stuff and was excited to finally have an opportunity, but I had forgotten how much driving time is involved when you go to anything in Reno.  It took me 35 minutes to get to Spanish Springs High School and I was just in time to see her high school take the field.  She is the drum major. 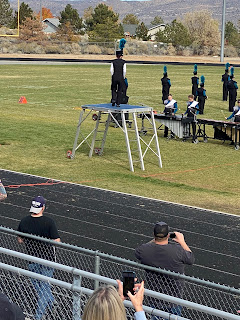 When given the "all clear" she climbs to the top of the platform where she will beat out the rhythm with her raised arms.  Their performance isn't very long at all, maybe five minutes - and she's holding her arms at shoulder height and beating the rhythm - not easy.  She says she chose this because you can't hear a flute in a marching band. 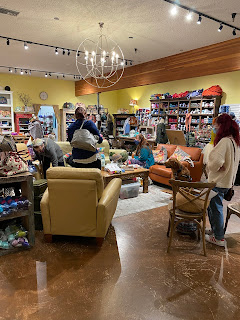 She has visited Yarn Refuge, a local yarn shop, and wanted us to go together to their Knit Night.  The store is every bit as impressive as she said it is. 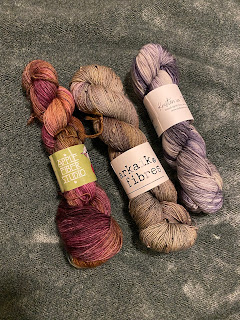 I had a hard time reining in my buying impulses and was relieved that I held myself to these three skeins.  I've cast-on using the middle skein for a scarf for Chrissie.  Greens and rusts are her colors.  I went back later and bought another skein - oops. 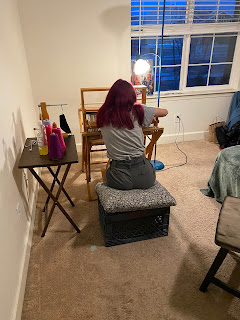 Meanwhile, weaving lessons are progressing.  Alexia is so busy that it's hard to find time but we're doing a little here and there and I think we'll get enough done that she will be able to weave after I go home. 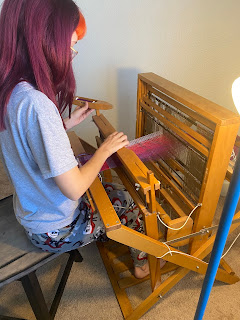 Tomorrow is the last day we'll have for weaving and since she has a threading error, I'm going to show her how to repair it.  It's a common error and every error is a learning opportunity.  She is doing great. 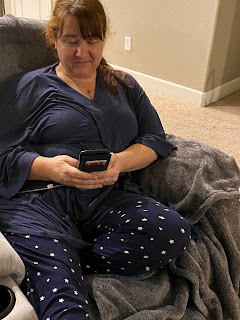 Every day Chrissie feels a little better and she's looking forward to the day when she can leave behind this special chair and sleep in her own bed with her C-Pap.  She is a trooper.  I was stunned to learn that because they opened her chest, they had to wire it closed.  That little dark knot on her chest is a knot of the wires that are holding her chest closed and will be hers for the rest of her life.
Today we took our first outing, her in the backseat of course.  We went to see my oldest grandson's apartment, meet his roommate and the cats, and we had a surprise visit when his girlfriend came home for lunch.  We visited for a couple of hours, reassuring to Kiernan to have his mother feeling up to a visit and reassuring to me that my grandson is becoming a man.
That's about the size of it.  The forecast is for rain on Monday so Tuesday I'll saddle up and ride off into the sunset, i.e., Bend.  I've learned that you never stop being a mom.