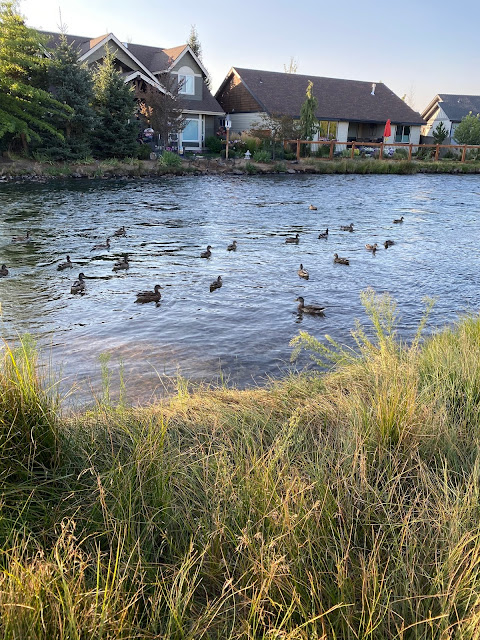 Local birds have are indicating that it's time to migrate.  I haven't seen geese along the canal trail in quite a while but I hear them overheard, going south.  I don't know what ducks do but they won't have the canal much longer as it will be shut off at the end of the irrigation season.  Two of the smaller irrigation companies have had to shut their water off early.  We're feeling the drought especially hard this year. 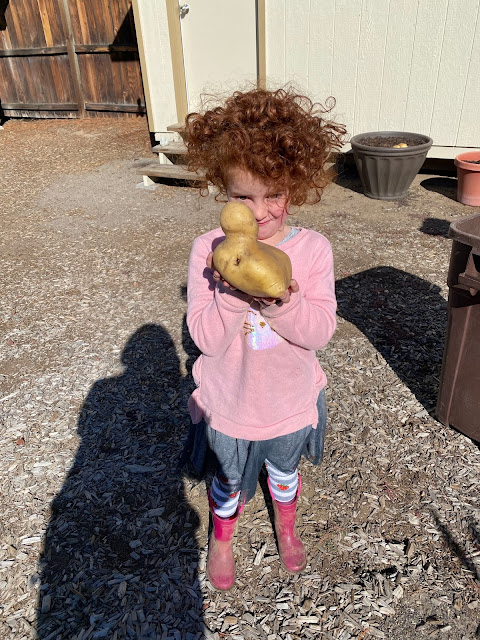 I could hear our neighbor Lee and his granddaughter Robin pulling up potatoes this morning while I was knitting on the patio.  They were excited to show it to Ian to see if he's ever had one this big.  Nope!  Robin calls it her potato duck; it really does look like a duck without a bill.  Boy was she excited. 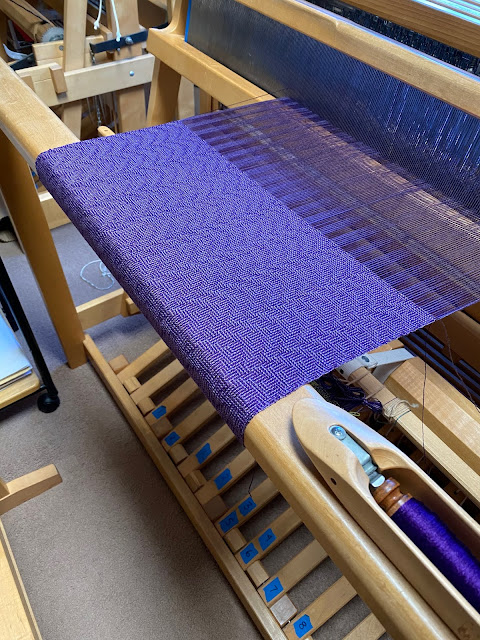 I was off by a day - thought it was Saturday which was disappointing.  My two days of free time suddenly shrank by half.  I have been working on this shawl all week, a little at a time, so today I wove long enough to see what it's going to look like.  This is my first time with Shadow Weave. 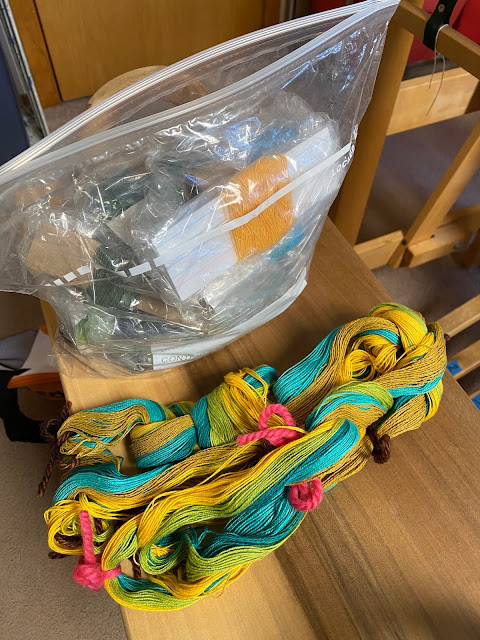 This is the warp for the Color Confidence workshop taught by Zoom from Sarah Jackson.  She provided all the yarn and even wound all the 3-yard warps herself.   I look forward to seeing the colors and patterns build when I start weaving Our first session is September 14th at 2:00.
This year is flying by.  I have one more week of PT for my knees and do the 15 minutes of home exercises before I even get out of bed.  I've walked the last three mornings with Ian and am back up to two pain-free miles.  My last bone density test was not good so I'm tackling the exercises and walking as if my life depended on it because it does.
I'm filling in as our guild's newsletter editor until elections in November.  Our 89-year-old dedicated editor had wanted to give it up for a long time.  I kept hearing that I needed to do something so I did.  I took in on.  Did I mention that I'm president this year?  The year of a pandemic and Zoom.  I took the lead from the Portland guild and chose a virtual platform called Mailchimp to get us moved into the 21st century.  I've never enjoyed learning software and this was no exception but now that I've tamed the confusion, I find it pretty agreeable to work with. 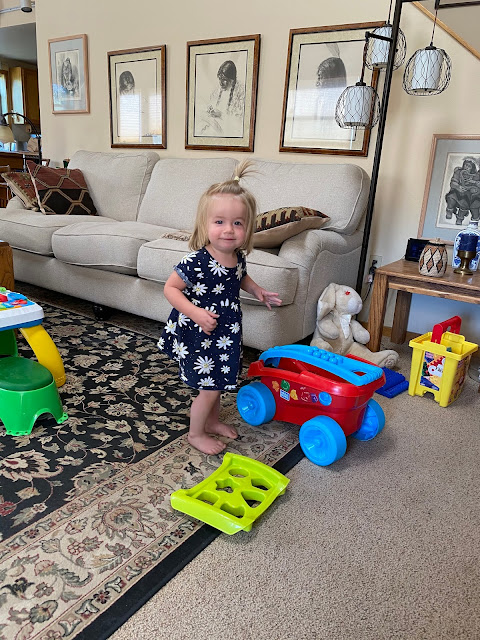 We watched Delaney three days last week.  Son Matt has always wanted to own his own tile installation company.  His birthday is Wednesday and this week marks the beginning of his dream come true.  Both he and Julia are the company and we are taking on two extra days a month so Julia can focus on office work.  It scares me to see him leave such a successful job as a production manager but he's already got work lined up through October.
Oregon is holding steady on Covid-19 infections and I do my best to not take risks.  We went out to dinner last evening for Ian's birthday and browsed our favorite indie bookstore afterward where he ordered a book.  One day at a time. 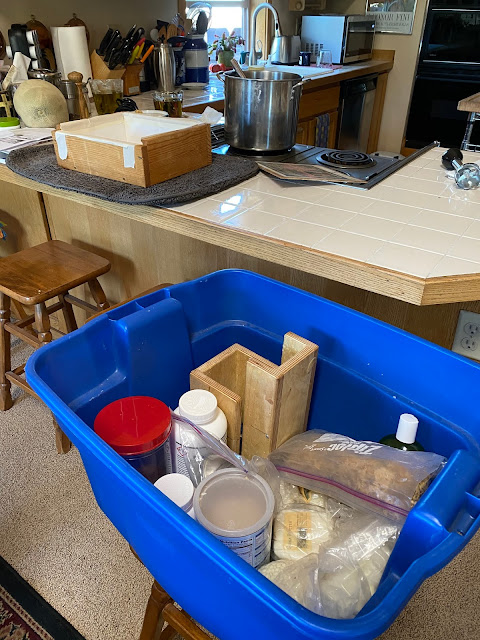 I don't make soap to sell anymore but I like it too much to stop making it altogether.  I've discovered that one batch makes enough to get us through a year, and it's that time again.  I looked at the upcoming week and realized that yesterday was the day.  The kitchen is pretty small so I have to put things away after I get them out, which really is no different than my weaving studio. 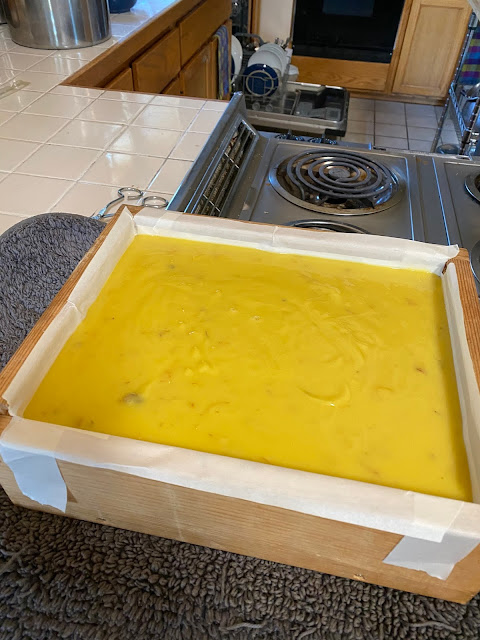 I've made soap for over 20 years and things change from year to year.  I still use the equipment I started with with the exception of the electric stick blender.  Now soap is poured into silicon molds and if I were starting out now, I'd invest in some.  The palm oil and sodium hydroxide I was using yesterday were completely new to me.  I was nervous about the volume of the flaked lye but since I measure by weight, it turned out to be soap in the end. 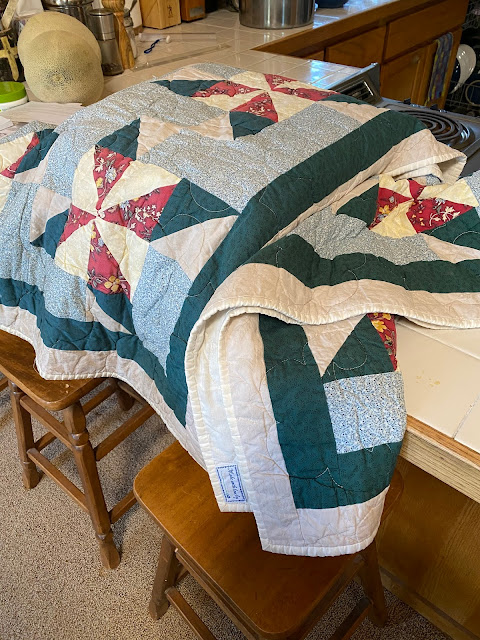 I wrap it up in one of my favorite quilts and let sit for 24 hours before I cut the bars.  And then the bars cure for a month before they're ready for use.  We only have a couple bars left so I felt the ticking clock. 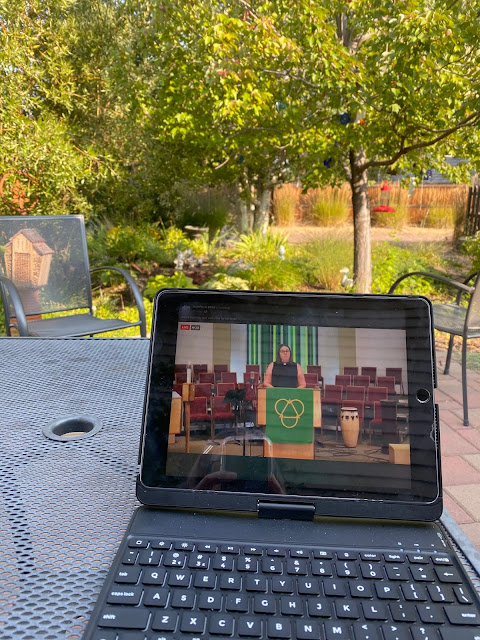 I started this morning by attending church on our patio.  I must admit that it's mighty nice to take my coffee and iPad outside and be there. 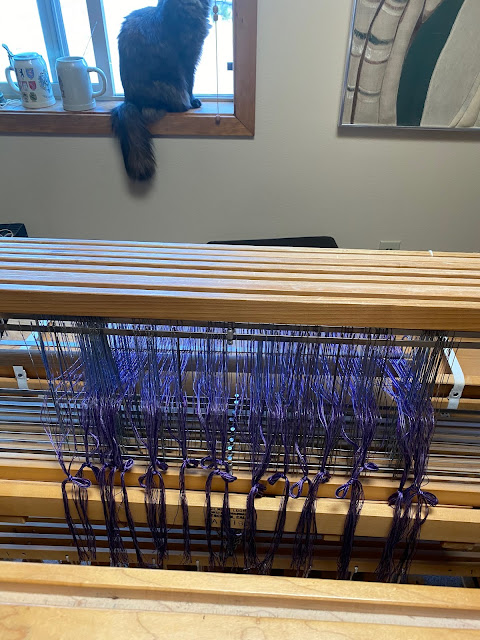 I've signed up for Sarah Jackson's Prayer Shawl weave-along.  This was a difficult warp for me so I only did it in increments so I could stay focused and even then I had to redo more often than I wanted.  It changed from light/dark to dark/light and the heddles changed direction with the color change.  Clearly I need more practice with this.  I finished the last of it this afternoon and recounted everything again.  I'm sure there are lurking errors anyway. 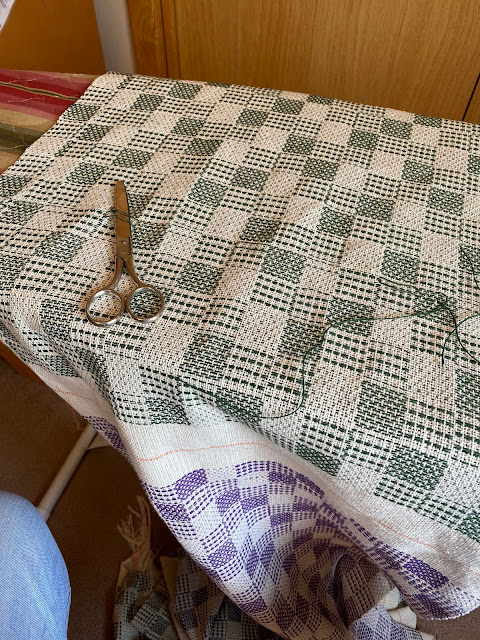 I also finished the Summer and Winter dishtowels.  I made too many threading errors.  I probably should put on more warp and do it again, but this evening I'm tired of them.  I had dangling loops on the backside of two towels which I started trying to stitch in place, but then decided - the heck with it.  I'll hem them and use them as hostess gifts.  They look good from the front. 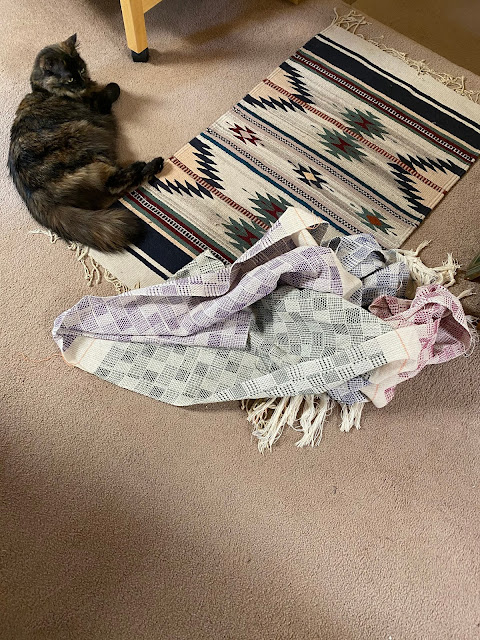 I'll wash them with the towels this week and start hemming.  I have 16 towels to hem which is more than a little daunting. 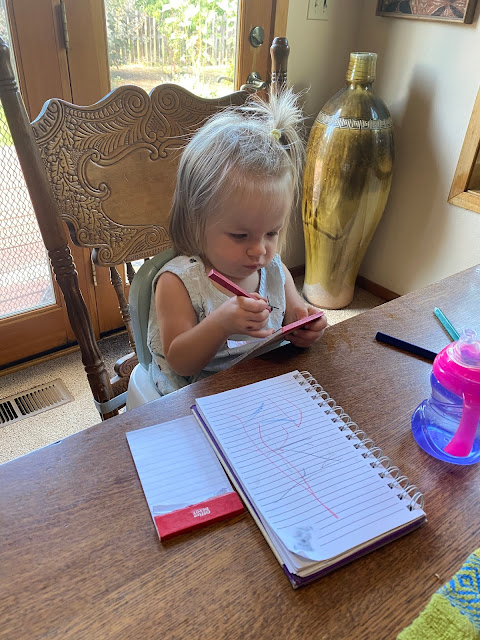 I took away the automatic pencil that Delaney loved and have substituted three fat crayons.  She was pretty angry at first but is getting along just fine with the switch.  I'll see how she does with the little pads this week and maybe tape some butcher paper to one of the walls as has been suggested to me.  The problem I see if that she might not understand the difference between the paper and the wall.  I figured these little pads are good for this week at least.  And the good news, I've found another work-around that I think will still be effective after Google does their upgrade in September.
Posted by Sharon at 5:10 PM 1 comment: 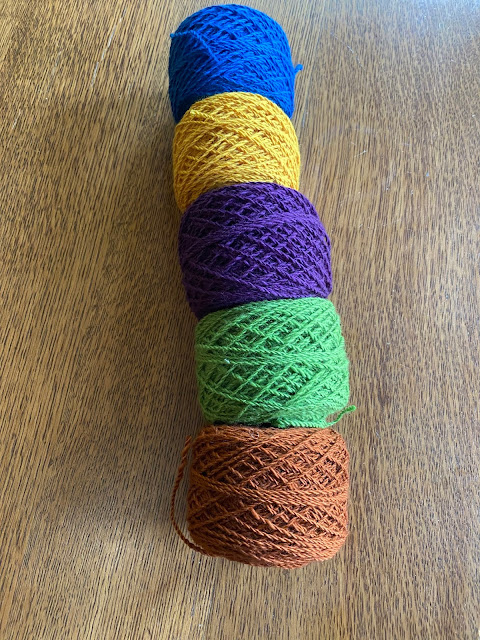 Last night the Blogger platform repeatedly froze up and it's been problematic loading pictures for months so I just assumed the worst, that they had closed their door to me.  I came back to it a little more rational this afternoon and still couldn't load pictures by drag and drop from the desktop, but I've found that I can access the photos that I have clicked the heart on.  If I stop blogging it will be because I made that decision, that the software has me stymied.  So here goes with my new workaround.
This is the yarn that I spun from roving in the three ANWG conference colors.  I tried to spin each one approximately the same and these came out close to sport weight. 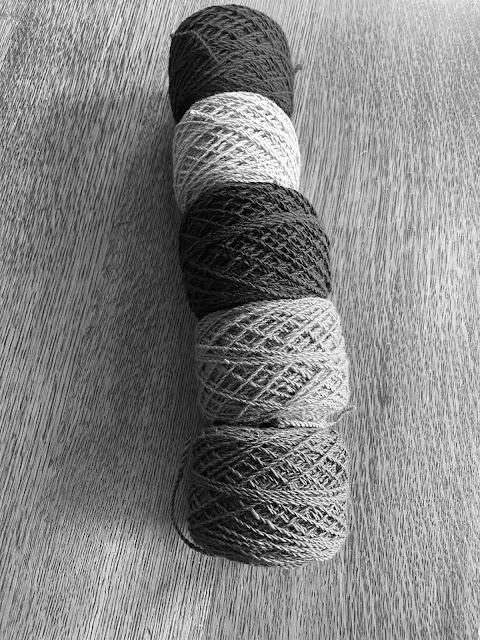 Before I started knitting I checked the value by saving my photo in a gray scale. 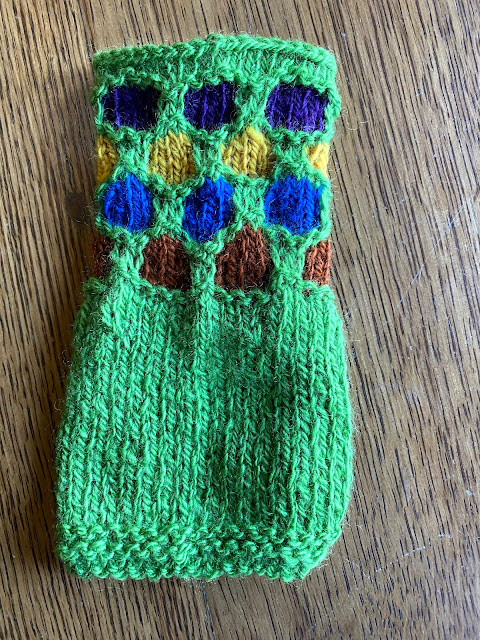 This is my swatch.  I found a pattern in Homespun, Hand Knit for a slip-stitch honeycomb pattern for mittens.  Once I found that pattern my plan became clear.  Hat and mittens!!  Now to actually do the work. 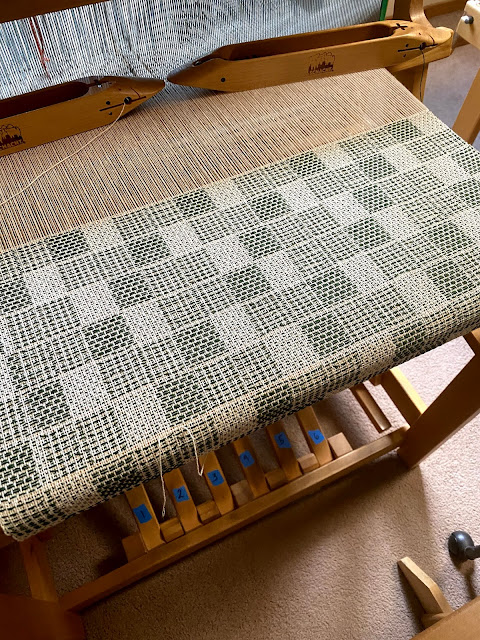 This is the third of six towels in Summer and Winter, a Sarah Jackson pattern in an older issue of Handwoven.  I haven't woven in two months so am doing some catch-up in the way of making mistakes.  Some I caught and fixed and others are part of the cloth.  I figure if it took me two towels to see them, it's not going to be glaringly apparent to a non-weaver.  Sarah has a Prayer Shawl weave-along that starts on Monday but I have to clear this loom first.  It's pretty clear that I'm going to be starting late.
I can't weave the days that Delaney is here, at least for now.  The looms are upstairs and we have a child gate in the stairs.  I'm in physical therapy twice a week for chondromalacia,  I'm hoping to rein this in before the degeneration leads to knee replacements. 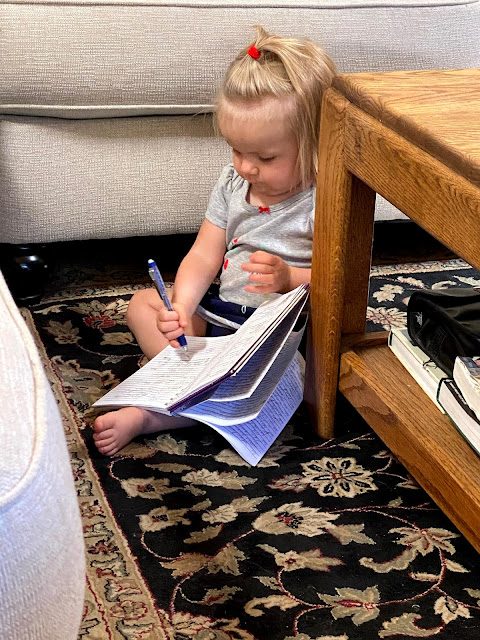 Delaney has discovered how to put pencil and paper together and loves to "write" in my notebook.  It's one I've used for at least ten years to jot down project notes.  She is very possessive of it now that she pulled it from my knitting basket along with the attached pencil.  If she's content, then I am content. 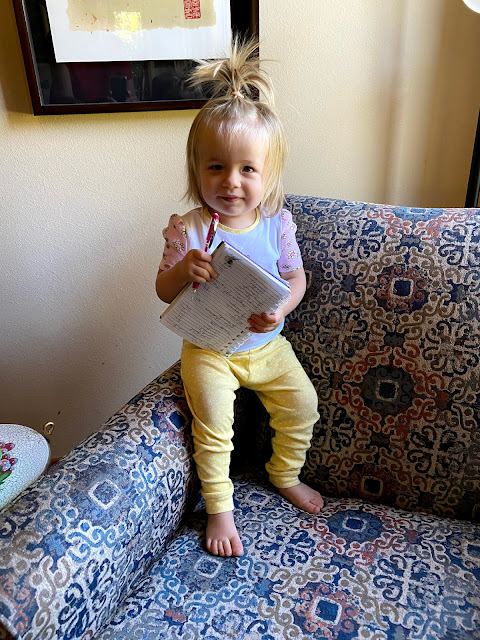 I wonder where her fascination with pencil and paper and with her own library will lead.
And I wonder if Blogger and I will still be friends tomorrow.
Posted by Sharon at 5:31 PM 3 comments:

The overarching sweep by ICE did not go unnoticed.  The New York Times covered it yesterday - read about it here.   I learned today that Rachel Maddow covered it last night on her show.  We know that the two men snatched by ICE have outstanding warrants, which are normally handled by the local police.  ICE was belligerent and uncooperative.   There's so much confusion.  I for one am very unhappy with the performance of the new chief of police.  I realize it was only his second day on the job but he didn't act very chief-like in my book.  The protestors started gathering at 1:00 and he was absent and silent until 7:00, and he said the swat team presented because they had been on a local exercise.  Believe that?  Meanwhile pickup trucks are removing mailboxes in Eugene and Portland.  'nuff of that stuff.

This might be my last post.  Blogger has changed so much that I am unable to post photos without a protracted workaround.  I am an Apple user and they have made in increasingly difficult to post photos without transferring them to a Microsoft friendly platform.  I do believe that WordPress is Apple friendly, but I'm not sure I have anything of interest to say anymore.  For now, I'll press the Pause button. 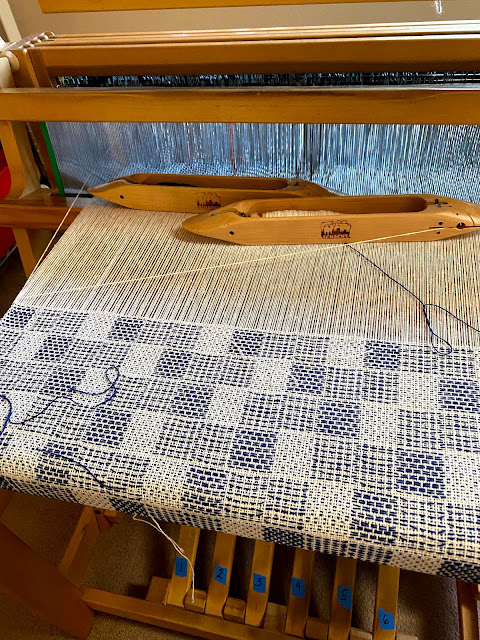 I haven't woven in two months and you'd think that in quarantine I'd have all the time in the world.  At least I thought that, but I feel busy but I sure don't have much to show for my time.  I decided to try something new and warped for Summer and Winter, a pattern I found in Handwoven.  I'm discovering that there are more threading errors than the one I found and fixed with a string heddle.  I don't have a sales outlet but usually around Christmas people contact me to buy towels as gifts.  That's what I have in mind for these.

I just started on this way overdue post when the news alert came in that two unmarked buses from ICE are in Bend rounding up people to deport.  We just got a new police chief sworn into office just last week.  He was second in the command in Portland where the police department has a reputation for rough stuff.  The city manager had the sole authority to hire Chief Krantz, over widespread protest from the community and from the District Attorney.  It didn't take him long to show his true colors.  The ACLU is on it's way but won't be here for a couple more hours.  Meanwhile, local protesters have surrounded the buses to prevent them from apprehending any more victims.  In Bend!!