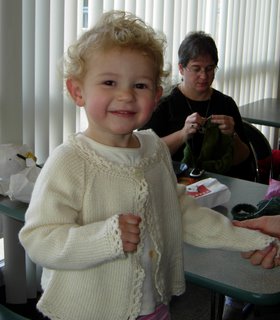 I went into town this morning to finish up a couple of last minute things and met Amy and my daughter Chris on campus for lunch. It’s so much easier to park on campus when school isn’t in session. My granddaughter Allie is in on-campus daycare so Chrissie brought her to lunch too - it's a condition of having lunch together. I took Allie's sweater that I had crocheted four rows around the whole thing twice. I was nervous that the neck was too big but I just couldn’t bring myself to redo the crocheted edge yet again. I just don’t love to crochet, even though I can. We all decided that the sweater will do.

I’m done with the cute sweater idea. I like Birdsong’s little animals and I realize they have much more kid appeal than a frustrating sweater. In the future I’ll stick to the Knitting Pure and Simple patterns of Diane Soucy. They’ve done well for me in the past and the sweaters fit for a long time. I do think I’ll order some superwash roving since the real fun for me is in the spinning. 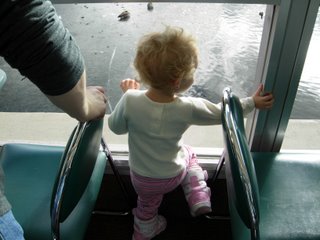 We ate at the Overlook, a student restaurant that is in the top level of the old student union and overlooks . “Ana see the ducks,” said Allie. So we went to see the ducks. The “ducks” are actually Canadian Geese and a some swans, but it doesn’t matter to Allie. She loves to watch the ducks. It’s so cold, they’re mostly “on” the lake. 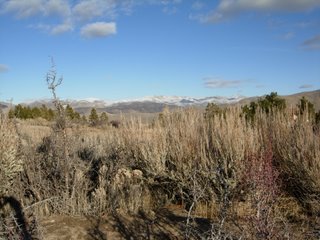 And speaking of cold, we got some snow last night. Driving home was so difficult that I had to follow the tire tracks of the previous vehicle for about seven miles because I couldn’t define the edge of the road and because the swirling snow was so disorienting. Today it’s hard to believe I’m not making that up. We just have a dusting on the mountains, like powdered sugar.

The sweater is darling -- no need for apologies there. Also, the grandaughter is pretty perfect as well.

Best wishes for a great holiday season to and your family from both of us.

Nice to get a chance to swing by and see the cute granddaughter, though I expect some of those holiday photos to show up here soon. Merry Christmas