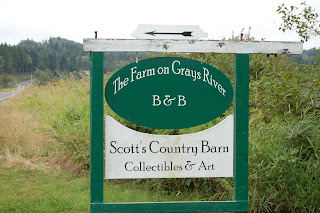 We're here in Washington on the Gray's River, named for Robert Gray who discovered both Tillamook and Astoria, Oregon. This is the place that my brother and sister-in-law bought in the early 1990's and had to reconstruct after the flood of 1996. They did such a great job and it's a wonderful tribute to Bob, the aggie from Cal Poly SLO. Since he is so present here, Georgene has decided to continue to run the B&B by herself. After all, they had already operated two on Bainbridge Island. 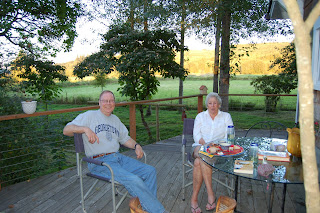 Ian and Georg are enjoying the knosh that became dinner. When we finished the loaf of French bread from the Pacific Bakery in Gearhart, the pepper brie from the Blue Heron in Tillamook and the smoked salmon from a neighbor, we realized we were no longer hungry. The weather was perfection. 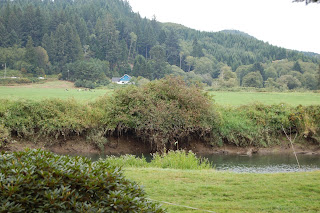 The Grays River is a tidal river, a northern tributary to the Columbia River, here at low tide. 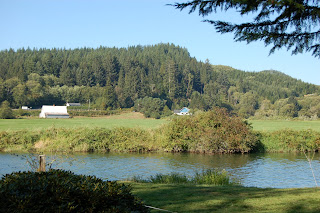 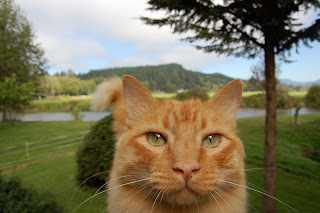 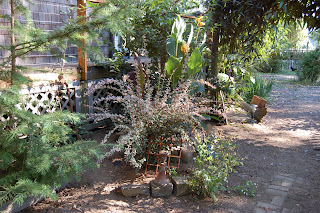 The grounds are full of mini-gardens, cats, chickens, bird feeders, goats, sheep, and two dogs. Bob loved every minute of creating all of this. B&B guests are repeaters and have loved every minute of what he created. In B&B reviews, he was appreciated for his storytellings. He and I come from a long line of storytellers and he richly honed the craft. Georg and I have become storytellers in his absence. 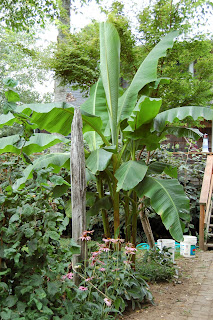 Bob was very proud of growing bananas in Western Washington. He got tickled anytime he did something that was outside the box, and he challenged many boxes. 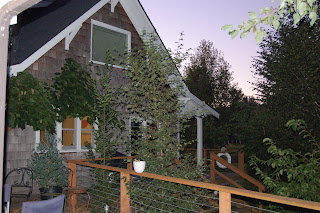 This is the main house. In the beginning there were no shrubs, no trees. Bob was passionate about both. Ian and I have adapted a lot of things that Bob did to our high desert setting. I know he's here in Washington, but at home, it feels like he's with me too. I don't get life. Sometimes it's too complex. 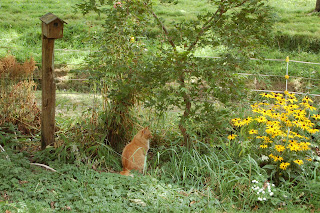 Lovely! I am sorry you have lost your brother. Based on what your latest entry said, he goes on not only at the B&B, but inside of you. You are Him, and he lives on through you.

I'm finally getting caught up on my blog reading. What a wonderful set of recent posts. Love the photos.

I'm so glad to know that the Blue Heron Cheese factory is still around - I love going thru the Tillamook factory, but the Blue Heron is such a sweet place - or it was 25 years ago - I'm sure they had just started up in business when I went there -

I'm sorry you have to go alone to your brother's memorial service, but glad you got to spend this time at his place. Hopefully it won't be the last time you go there, it is really very beautiful. T.