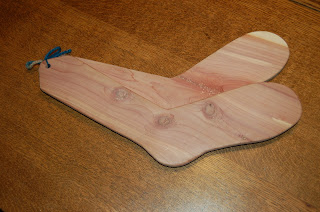 When I ordered my dyes from Carolina Home-
spun, I said - oh, and by the way. Do you sell sock forms and she said yes, two kinds: a molded plastic one, for more than I wanted to spend, and also a cedar form, which just came yesterday. They're kinda funky but for $14.00, they smell great and do what I want them to do - form socks. 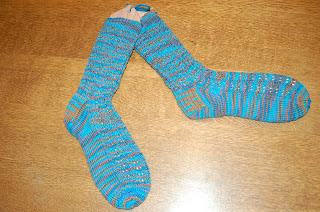 And what a co-inki-dink, I happen to have a pair of socks to form. These socks are a gift, but I really like this yarn. It's tightly spun and the color runs don't cluster and puddle like I have experienced on some other sock yarns. It was called Indie Dyer, a custom colored sock yarn for Jimmy Beans. I thought - right on. Next time I'm in town, I'm going to get a couple more hanks - one hank makes a pair with plenty to spare - great deal. 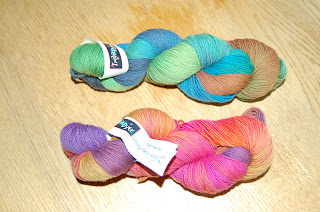 I kept looking through the sock yarns until I finally realized that the reason I couldn't find it was that it wasn't on display. Jeanie said that they had sold it out but she'd check to see if there was any inventory left. I was able to get these two hanks and now I'll have to find a new favorite sock yarn. When they said custom dyed, they meant it. Sigh.

As for our trip to New York, we're going October 13th through the 22nd. Ian chose these dates so we could be there during the New Yorker Festival. This will be their 1oth anniversary and they still haven't announced the line-up. Meanwhile, tickets go on sale September 18th - oh so New York. We're staying at my BIL/SIL's place on the Hudson - a genuine treat. SIL Rochelle thinks she might be able to join us. It couldn't be more up in the air. 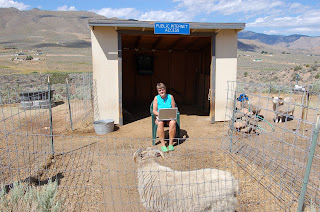 Ian is having a lot of fun with this sign. Is there such a thing as re-pranking? I think Carol and Tamra have unleashed a monster. He's already planning the next "internet station" - don't hold your breath. It's not that exciting. This might be the garden gnome in every picture - until the sign wears out. I hope he isn't planning one of me sitting in the snow with it. Oh - I'll bet he is.
Posted by Sharon at 8:38 PM

LOL! The internet station is pretty darn cute. I bet those sheep are waiting for you to leave so they can scan for alfalfa hay delivery! Are those all girls or do you have a wether there too. Nice horns!
The socks are beautiful and making me feel a bit guilty. I see you have a pair. I need to finish my Dad's second sock. Where does the time go????

The internet station is too funny!!!! (And yes....to humor your husband you either have to pose in the snow....or surreptitiously destroy that sign!!)

I got a plastic sock form from Knitpicks.com, but I'm afraid it's too big. I'm afraid it would stretch out the socks too much. Don't know if that's even possible!

Oh, the NY trip sounds great! Whenever I think of the Hudson, I think of Mark Helprin's "Winter's Tale," one of my favorite books. Lyrical, magical, beautiful...

The blue socks are just gorgeous. Hey, there's a reason the yarn is special and hard to come by!

The sheep in front of you seems to be looking at you a bit oddly; wonder what he thinks of you sitting in his pen with that contraption on your lap. Im betting it isnt very flattering lol

Your Internet Station reminds of our Amish neighbor's telephone booth at the edge of their property in their cow pasture.

Sock's are sure nice!!!!! Love the blue yarn they are made from.

I'm sure you'll have a great time in New York. It's always fun to get away for awhile.

I really like those sock forms. Mine are homemade from a pair of wire hangers.