Heck of a Thing 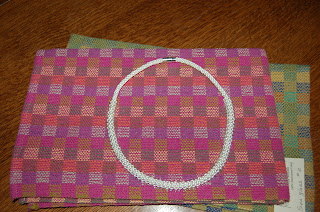 I finished another Kumihimo project and am really pleased with the outcome.  This time the cord and beads are of my choosing instead of from a kit.  My life has been so much fun since retirement.  I'm excited about the library job and was really looking forward to subbing for the 6th grade ESL kids yesterday.  I had a plan for potty breaks and was looking forward to the Athens and Sparta role play.  I had another story selected that I was pretty sure they'd love to hear and thought we do a couple of Mad Libs after lunch.

I jumped into the car just as it was turning light yesterday morning and started off on my customary hour drive to town.  I hadn't been on the road but about 15 minutes when I realized I felt a little off,  Within ten minutes it occurred to me that I was a little headed.  I rolled down the windows in the event I had a carbon monoxide leak, even though it was 24 degrees outside. I could see my breath.   By the time I hit the half hour mark I was driving directly into the rising sun which is always difficult but I already realized that I had full-blown dizziness.  The traffic had slowed and I was now alarmed that my reflexes might not be adequate.  I decided I needed to get medical help.  I left the freeway at Parr Boulevard, intending to drive myself to the St Mary's ER, but I finally had to acknowledge that it wasn't safe to drive that far and pulled over to call 911.  Then I realized that I had just passed the Sheriffs Office and went back there.

They were awesome.  It was really early so a lot of doors were locked but when I found the woman at the counter in the waiting area, I told me that I just needed to sit down, that I had been driving and but had become dizzy.  She asked if I wanted her to call an ambulance and I said not at the moment.  What transpired is that the jail nurse came up and made an evaluation, then called my doctor with her information.  He said the blood sugar was normal, as was my heart rate but my pulse was elevated, probably as a result of my alarm.  He diagnosed a viral inner ear infection, which he said was going around now.  The very nice nurse and a deputy were prepared to stay with me until Ian came, but he called a friend who is head of records in the jail who came out to get me and had me stay in her comfortable office while I waited.  She offered me coffee but the nurse told me that until it cleared up, caffeine would be a bad idea.  I leaned this morning how right she was.

Somewhere in there I called Ian who snagged a neighbor to drive the extra vehicle home.  He called the school for me and they were *not* happy.  I was so disappointed - by everything.  We missed the party at Red Rock Ranch last night.  I missed my guild potluck today - a celebration of our 40th birthday with everyone in 70s attire - and we will miss a party tonight at Joe's pottery studio.  I have medicine for the vertigo and nausea, have realized that caffeine is not my friend, and have settled down wait this out.  My doc says I should feel better in a week,which means Ian is now my temporary chauffeur.  I'm disappointed but not unhappy.  The outcome could have much different.
Posted by Sharon at 3:23 PM

The timing stinks but you know what? God is in the details! I don't know what He has planned but it is for the best.

What a wise decision. Hope you are recovered soon.

I'm sorry you didn't get to execute what sounded like a wonderful time in "your" classroom... But I'm glad you pulled over. I probably would have kept driving (I'm a bit stubborn, you know...).

A restful holiday is not a bad thing, and I'm glad you don't have an ear ache. Hopefully the lack of caffeine won't affect you badly.

Next time I come down, I need to get a Joe pie plate. I broke my favorite one that my sister got me years ago, and now need a replacement. Does he make deep-dish, 10" ones?? Maybe I could order one?

Anyway - I hope you're on the mend soon!

i had vertigo once with a bad ear infection and it was nauseating as well as frustrating. armed with what sounds like the same set of drugs, i held onto the sofa and listened to the tv for about a week before i was up and running again.(without tipping over)i hope you find your sea legs soon!

I'm so sorry you're under the weather...but so thankful you recognized the signs that something was going on!!!! Take some restful time for yourself and get to feeling better!

Oh my gosh, how scary - I'm so glad you were able to get help when you did and didn't drive any further. The school will get over it - your health and being safe is the most important thing. Get some rest, hope you're not 'down' for too long with this infection.

I am glad you were able to pull off the road, and get help! Last year a stomachs virus hit me as I was driving down the road at 60mph. I passed out and it was only by the Grace of God that I was not killed.

Glad to hear you are OK!

A rest is not the end of the world, sometimes it's better than all the frenzy of the social whirl....

I remember my grandfather having the same issue, and he was flat for a week. Every time he tried to get up, the nausea would hit him and down he'd go again.

I hope you get to feeling better. Take it easy.