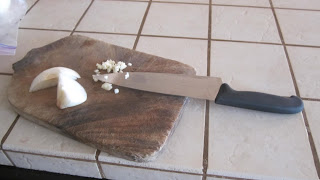 Thursday morning over coffee, Sue and I got onto the subject of kitchen knives and then realized that we had both heard the NPR American's Test Kitchen episode where they tested chef's knives.  We were both astonished that Swiss Army Knife had been their hands down winner - again.  It's been their winner for several years in a row and comes in at under $30.  Sue remembered that the model is Victorinox so I went upstairs and ordered it on my iPad.  I was astonished when I arrived home Friday to find an Amazon box on the counter - it was my knife.  The blade isn't better than my Henckel but the handle is what seals the deal.  In case you're looking to upgrade~ 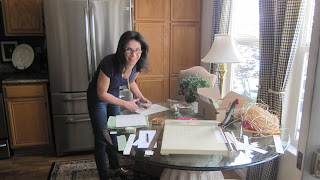 Pam and I got together after church on Sunday and went to work on Kelly's wedding-favor soaps. We spent the first hour trying to get the little cards printed with their names and the wedding date.  I had done the cards in advance and had them on my laptop but Pam struggled to find her WiFi password - a little setback.  We finally got that resolved and printed the cards and Pam sent Kelly a picture for approval.  We had misspelled the groom's name, after printing and cutting apart half the cards - on special limited paper. 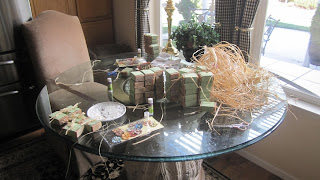 We had a wing-ding of a mess on our hands, tearing the seed-impregnated paper into strips,  cutting the little cards into precise 1.5 x 1.25 squares to slip in the back and then there was the rafia.  We had left off Kelly's requested line - Hand-in-Hand Soap.  It was supposed to be a pun and bypassed both of us.  Kelly was so upset that she said that she and Steve would print the cards and slip them into the soaps themselves.  I told Pam - no.  They're on overload, leaving for his family in San Diego in the morning and back to their hospital shifts when they get home. 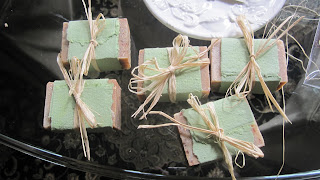 Pam and I have been friends for over half our lives, from before Kelly, and we have absolutely nothing in common, other than the experiences we have shared.  She is one of the most artistic and creative people I know, but these soaps were her Waterloo.  I was counting as we went, stacking in piles of five.  Finally I said - okay.  I have forty here, what do you have?  She looked around her and counted the various bars - nine?  We both laughed.  That's my Pam. 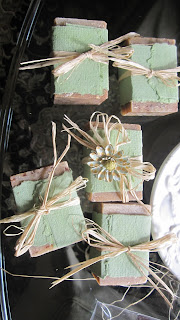 The final step is to hot-glue the flowers onto each soap.  I wish I could help Pam with this step as school starts this week and I know she'll be be swamped.  Steven and Kelly have purchased little clay pots and will place a seed ball and a bar of soap into each one.  They have done this entire wedding on a tiny budget.  The actual ceremony is on a peak in Yosemite and the reception is in her dad's backyard. I haven't seen her dad in years.  I'm looking forward to the reception. 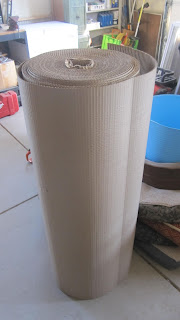 I picked up this roll of corrugated cardboard when I was at Ingrid's last week - her with a non-functioning well and me with an overheating car.  Cindie Kitchens asked me how I was going to cut it.  Well now, that thought had never crossed my mind.  I got the end of a roll from someone who was very willing to share.  Cindie suggested a box cutter on a concrete floor.  I can see that this isn't going to be a simple task. 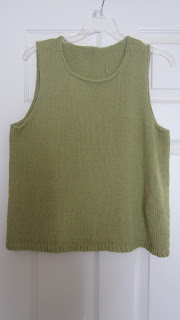 I've finished the Knitting Pure and Simple shell from Knit Picks CotLin.  It turned out great, fits well and I can see is going to be easy to maintain.  I don't know how to work in ends on a fiber like this so they're pretty unsightly.  I guess as long as they're out of sight, they're out of my mind - anyway, I'll knit this again. 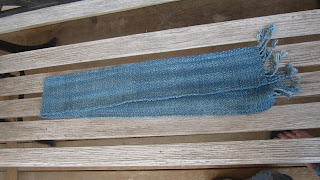 I finally finished my scarf.  This is from handspun BlueFace Leicester and dyed with indigo.  The warp was a light blue that I dipped back into the pot on one end to get two colors of blue in the skein.  I used a darker blue for the weft.  My struggle has been with gently pulling the beater back.  Imagine a bug and don't squish it, was the advice from one weaver.  When I left Ingrid's, she said - remember.  And she gestured a tiny pull back. 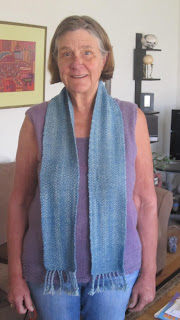 I learned a lot on this project.  I think it looks great but handspun wool doesn't make a great neck warmer.  I'll still wear this with my winter coat because I like it.  I sampled at the end of the project - next time I'll do it at the start.  This would probably have been better in plain weave.  Cindie sent me samples and I can see their value.  I used a flashlight and periodically shown it back up to see if my beat was even.  It's necessary to have a space between each weft beat so that the cloth isn't rug-like and keeping it even is a challenge.  I have a sample from this project and I'll continue to collect them.  It's the best way to learn.  I'm sorry I've been so slow to catch onto the value of samples. 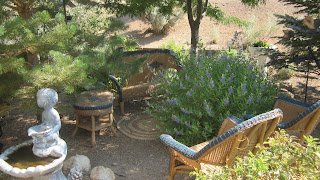 I wanted to read this morning in the area we created a while ago but this gorgeous caryopteris has asserted itself and alas there's no room for legs. 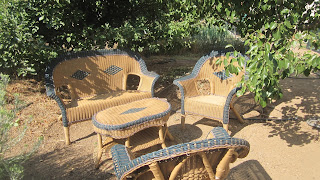 I had Ian help me relocate the furniture to this spot.  It's on the east side of the fruit trees and I just checked - it's totally in shade.  When we moved here there was nothing but sagebrush.  We've grown our own shade over the past 11 years and it means that we have to adapt each year as the shade changes.  I'm not complaining.  Shade is good.

Wow, you have been one busy lady! Those wedding favors are going to be remembered for years to come by the guests.

If you're cutting your cardboard across the width, a box cutter will work. If you're trying to cut it length-wise, you might consider a sawz-all with a very fine blade.

Love the evolution of the front yard and the shade. I can't believe how things have grown.

I have a handspun scarf, also indigo dyed that I need to finish. I'll send you pictures. I think it's probably too thick too, even though I was leaving space. it's hard to leave space - I like whacking!!

The wedding favors sound so wonderful....but the amount of detail sound pretty stressful!

Happy scarf weaving....scarf season will soon be here. Enjoy that new outdoor arrangement while you can!