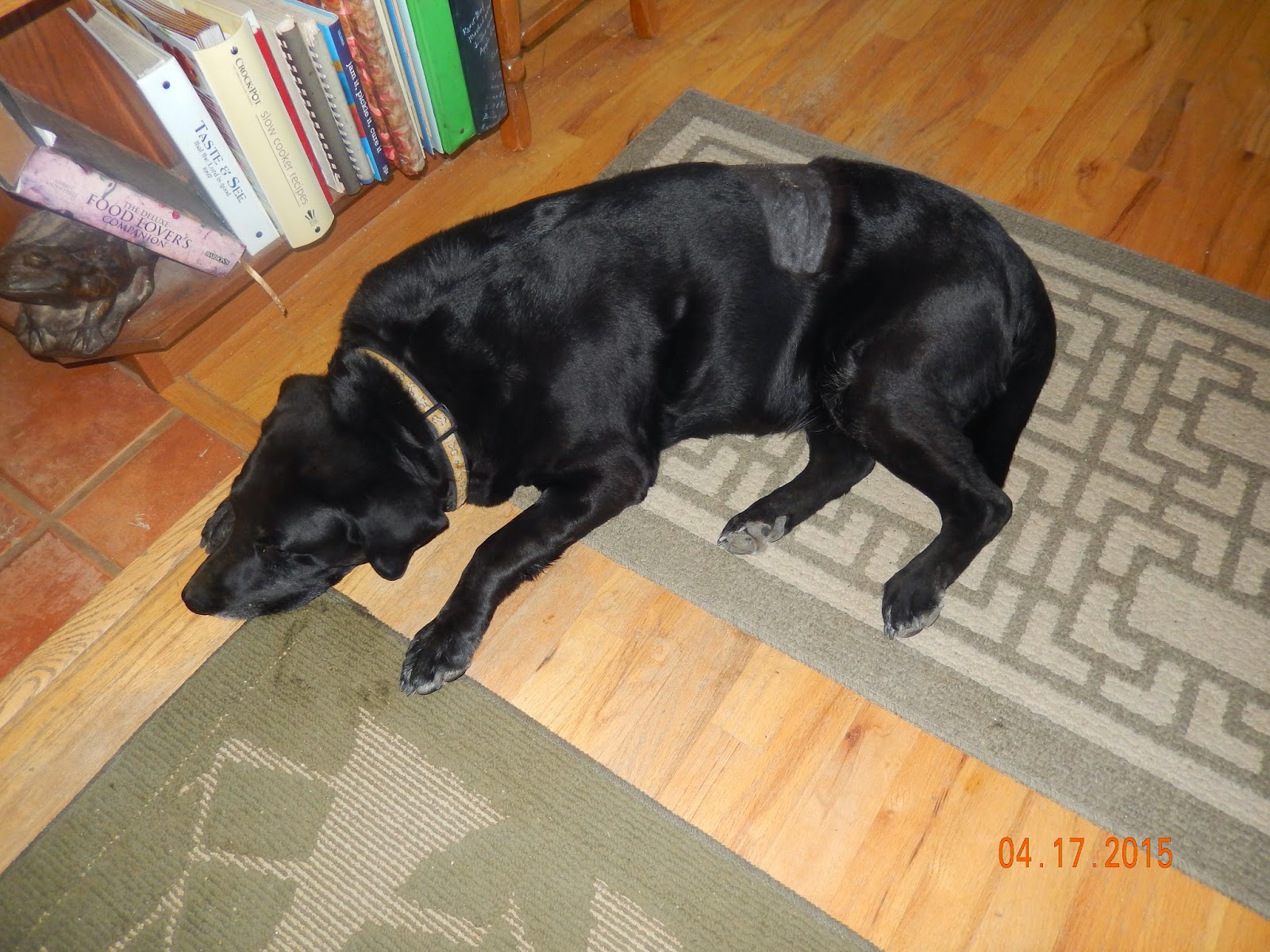 We had a 9:00 appointment Tuesday morning with our vet for both dogs.  Sammy had her stitches out and the incision has healed nicely, though her growing hair seems to bother her.  It was raining when I woke up and by 7:00 the temperature had dropped to 28 and it was snowing hard.  We left early to allow plenty of time since rain under snow means ice.  Unfortunately, someone on our windy road rolled their car on one of the turns and had to be careflighted out.  By the afternoon, it was once again warm and there was no evidence that it had snowed.  Such is the nature of a high desert storm. 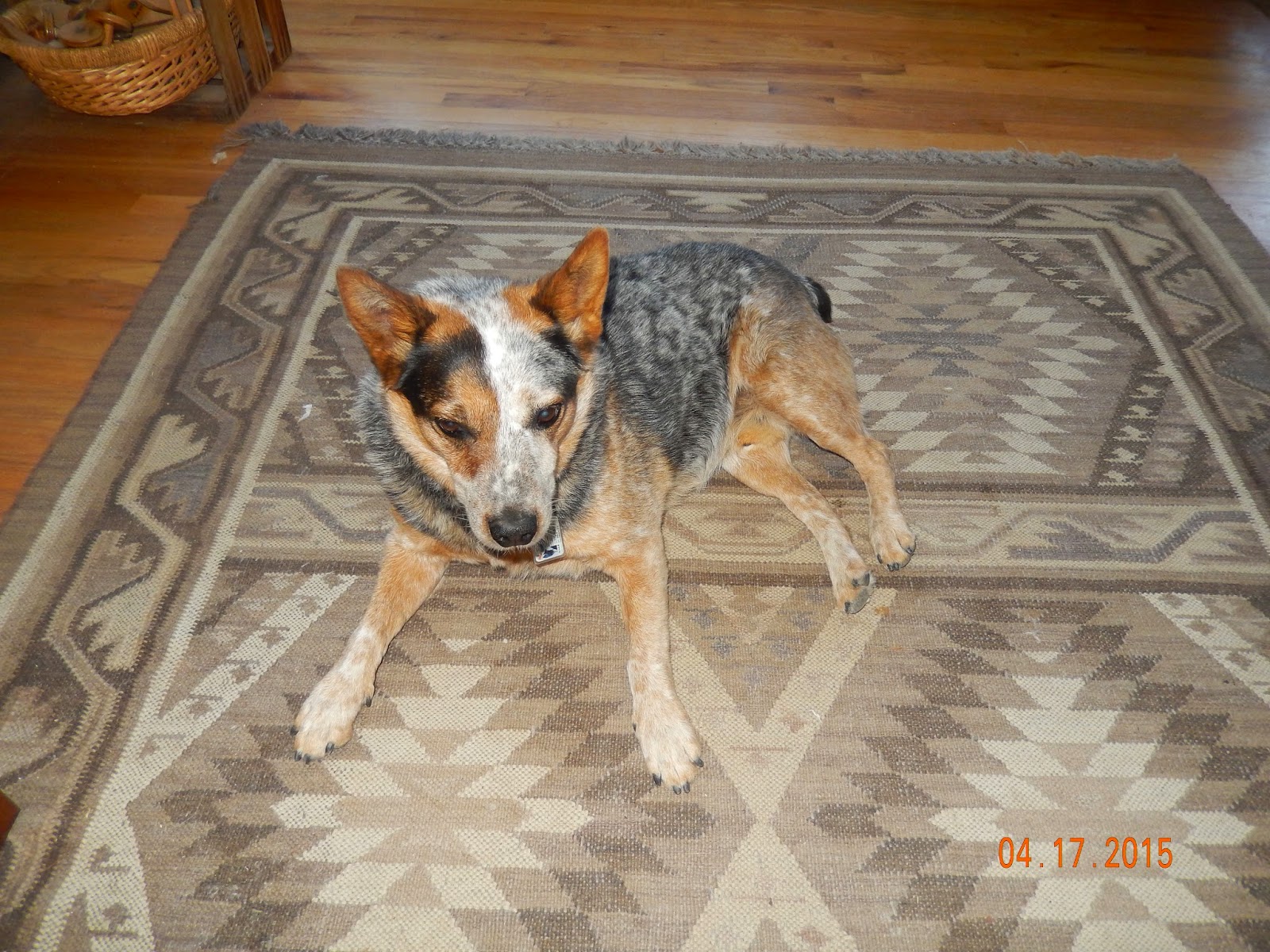 Buster had a biopsy on Tuesday and the results still aren't back.  He only had one stitch but it's on his elbow and he managed to tear it out yesterday.  His licking seems to have slowed down today and we think it's showing signs of healing.  We put a warp on it but he tore it right off so I guess this is the way he wants it. 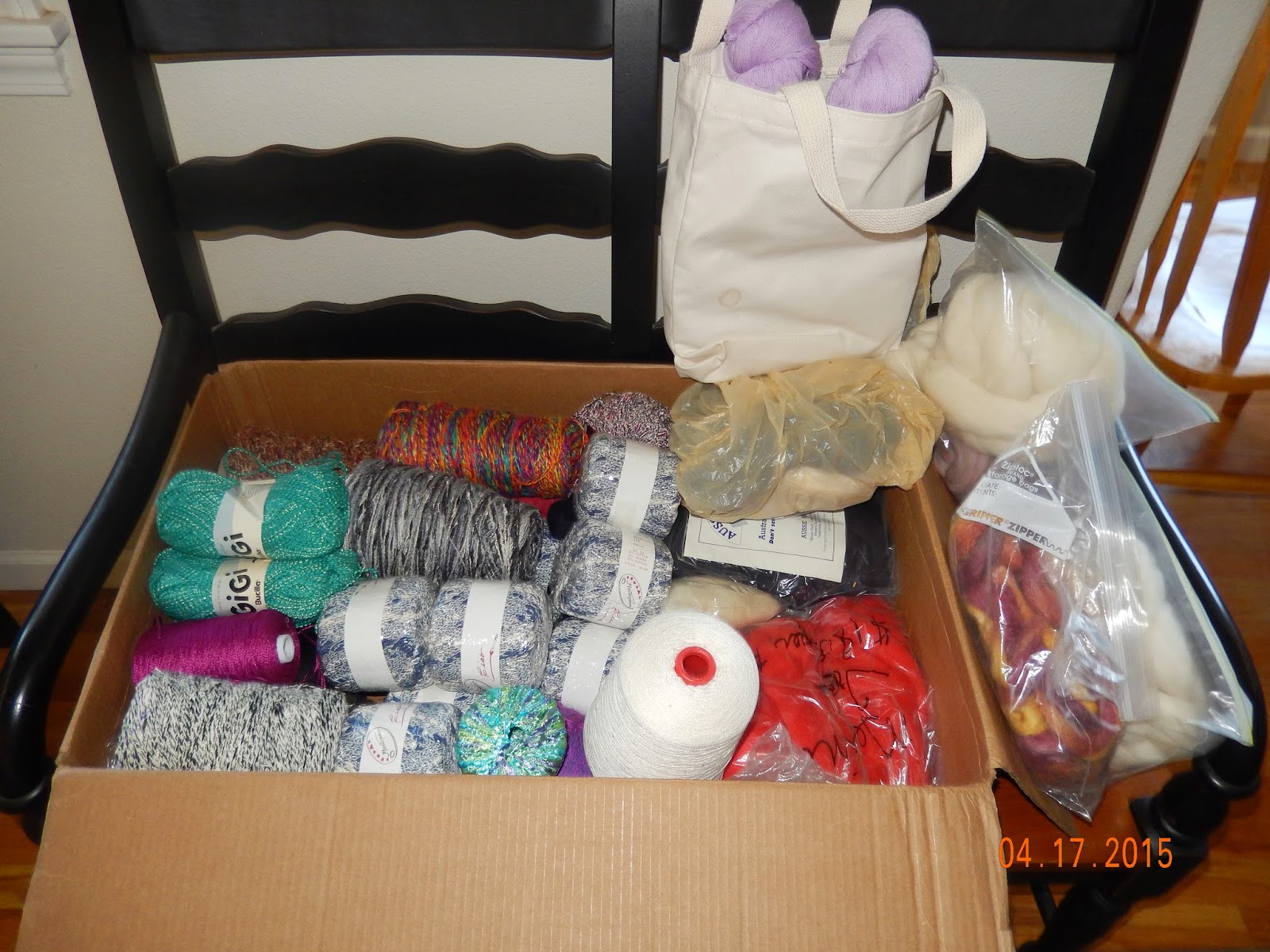 Meanwhile, Melissa sent me another "care" package.  Originally, the person who cleaned out her stash brought Melissa ten black trash bags.  She took the stuff she wanted and when I was down there in February, we sorted through it and I chose the things I wanted.  She sent some in an earlier box and this is the last of it.  We filled three black trash bags with the leftovers and she took them to her guild. 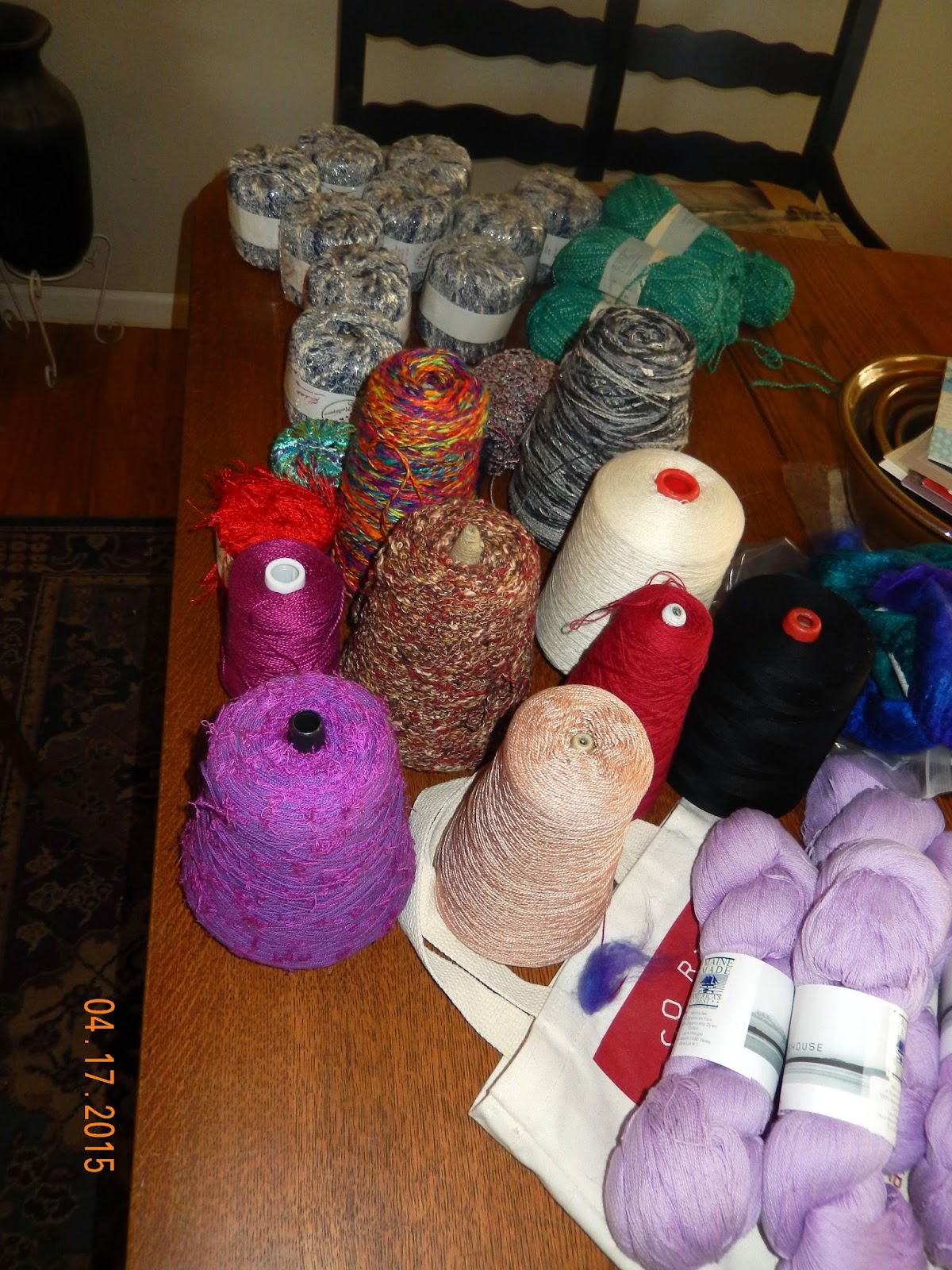 I think some of the yarn might end up in my knitting. 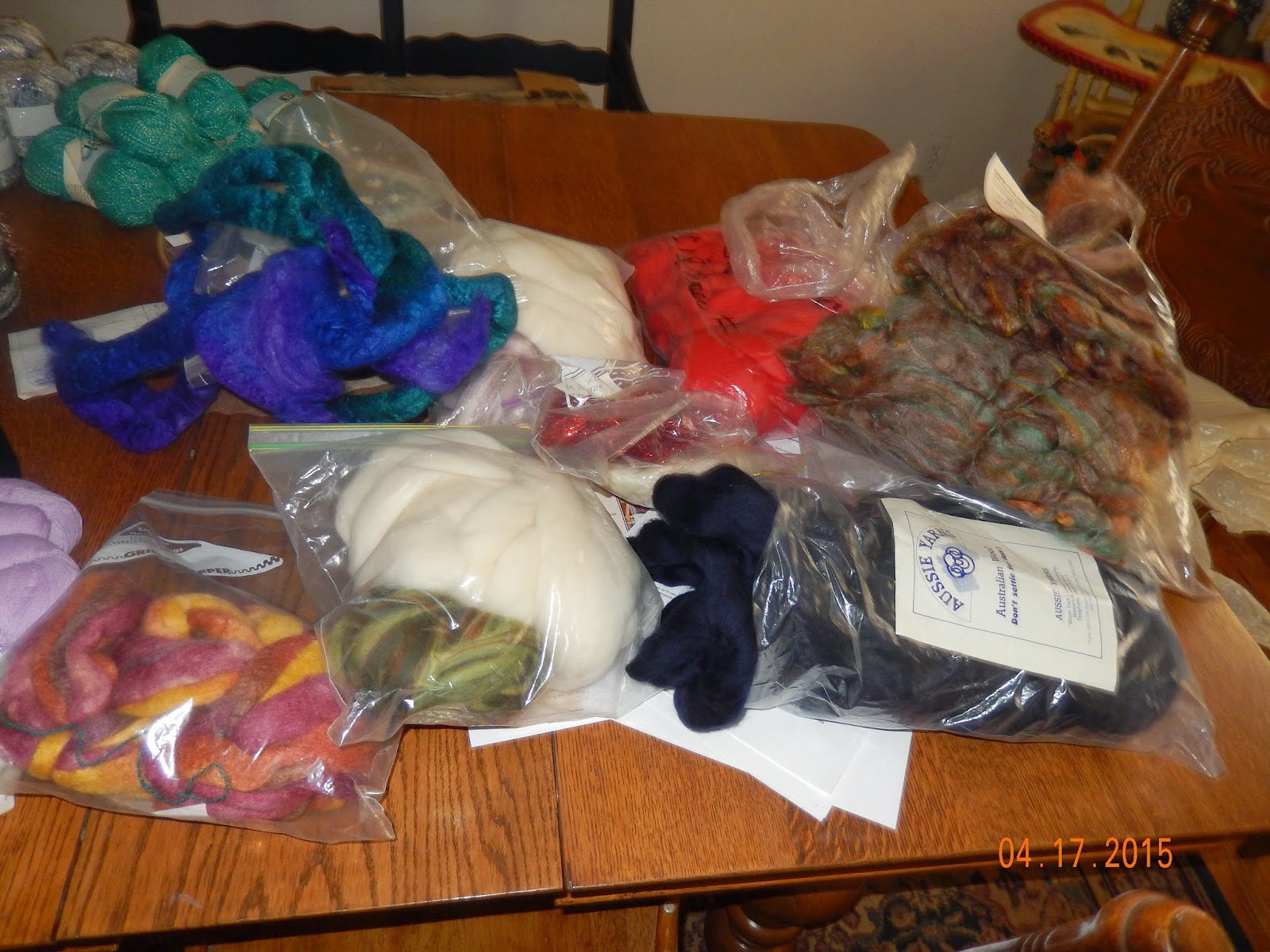 There is also quite a bit of roving in this batch.  When t he weather gets warmer, one of the things I enjoy is spinning in the morning on the deck, before the wind comes up.  This will be fun. 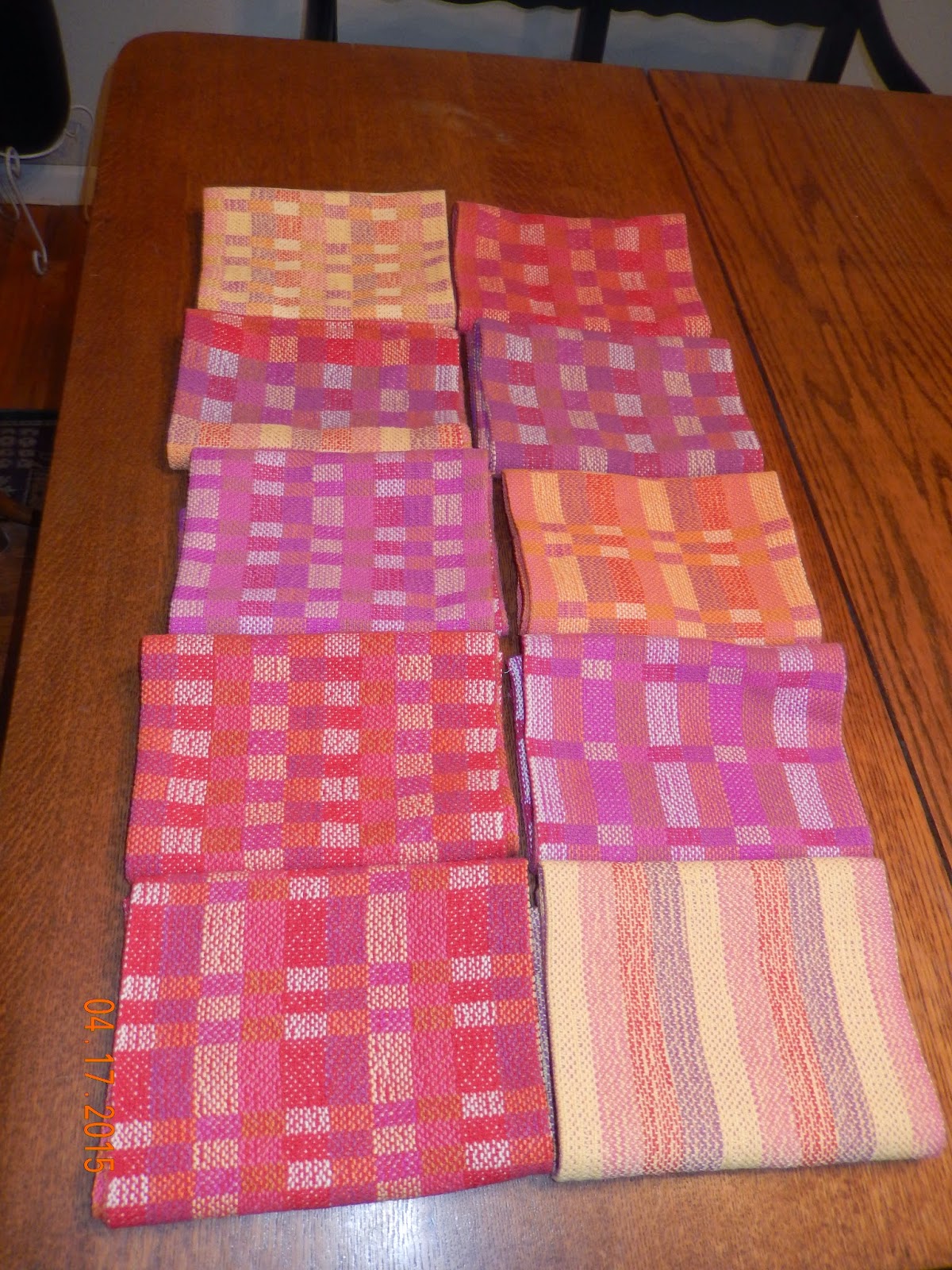 My last nine-yard warp is finished - ten towels on one warp. 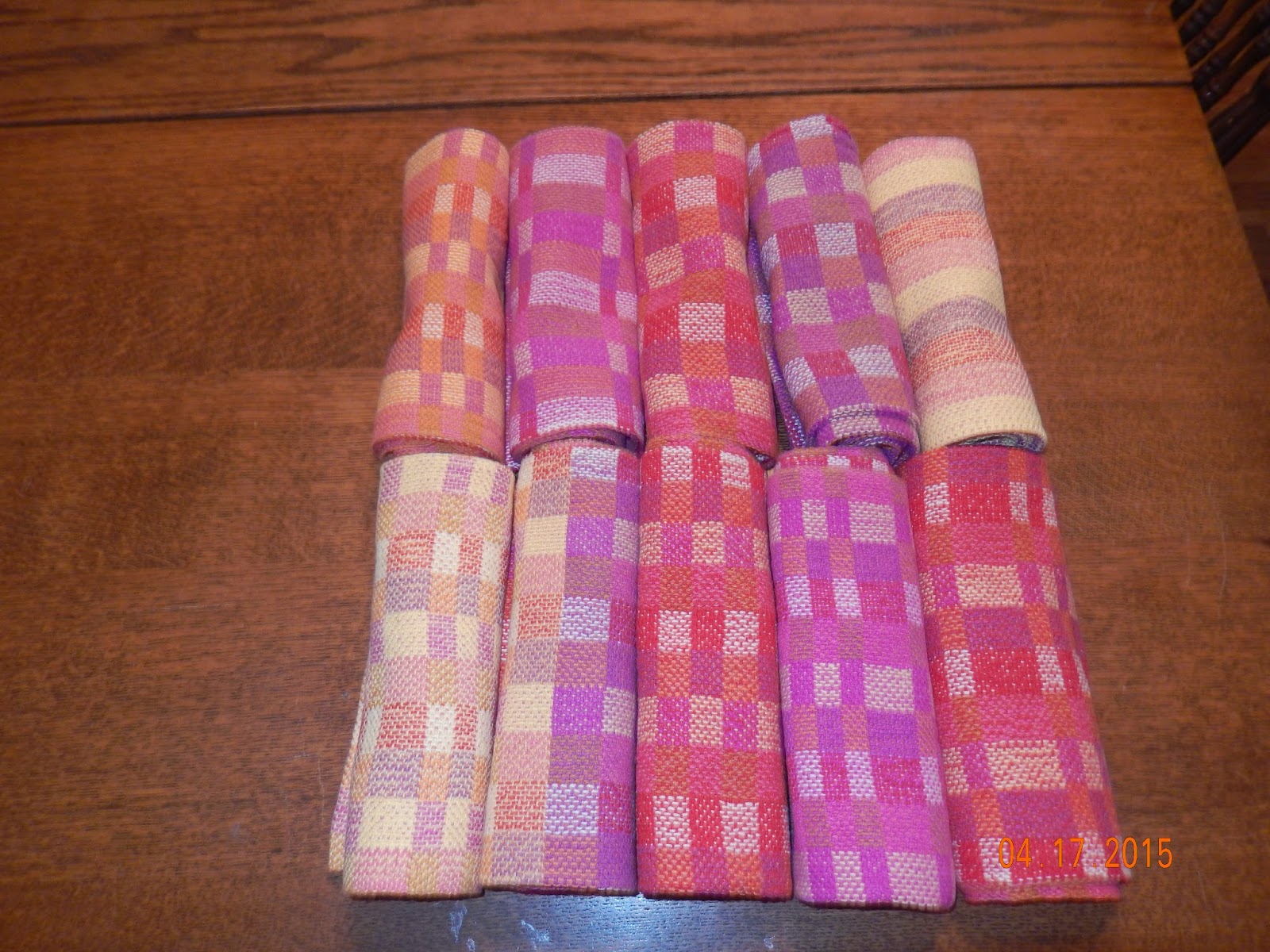 I am still fascinated by the variety turned taquete allows but I'm taking a hiatus on towels.  I have a good head start for the fall craft fairs.  I've decided instead to sample on both my looms.  I've picked out drafts from Davison for Maudie Mae and from Strickler for Arthur.  There are just too many things in weaving that are still confusing to me.

But it wont be soon.  We have company this weekend.  Our friend Petey will be here for a few days, arriving about lunch time and then we will go to daughter Christina's for her birthday barbecue.  I got a call on Friday to sub all next week at Van Gorder, which is one of the new schools and will have a nice new library.  It's also very far from our house.  I'll come back to weaving with a fresh perspective, raring to go.
Posted by Sharon at 9:29 AM

I love those towels, and your fearless conquering of weaving techniques you don't understand, until you do!