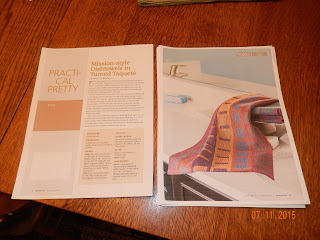 Today was the second of our guild's new once-a-month informal meetings to sit in a circle and chat about projects and successes, so I took the galley proofs from my Handwoven article along with all the documentation they required and some towels from my two latest color incarnations.  I was worried that I would come off as a show-off and I was truly touched by the positive responses I received.  And it's really wonderful to see what the new weavers are working on.  Some of the old members who haven't been weaving in a while admit to feeling a desire to get back to their looms. 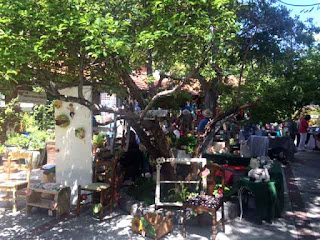 I had planned to leave the meeting and since I was in town, would just go to 4:00 Mass.  However the meeting ended at 2:00 and that's a lot of time to kill, but Lorene told us that Art in the Garden was today and our member Kate Hanlon had a booth.  She passed around a postcard with the address so off I went to find it.  I've heard about it for years but this is my first time to attend.  It's put on by the Friends of Washoe County Library to benefit the public library system.

Within minutes I was chatting with Charlotte Voitoff and Shiree Wallace who have been "friends" of the library for over 20 years.  I met them when we used to set up the library auction benefit at the main library (where I worked) called Tisket-a-Tasket, a Literary Basket.  They were both tireless workers and today's event is in Shiree's garden.  BTW, Shiree is my boss as a school library sub.  Small world!!  And I could not believe how many old friends I ran into.  I was glad I had so much time to kill. 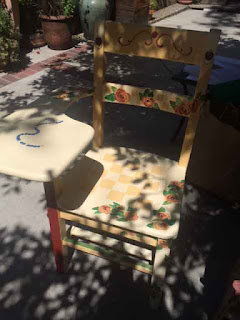 Within moments I had spotted this chair and knew it was going home with me, which makes no sense since I've been getting rid of things.  I knew Charlotte had painted it.  I have a highchair that I bought 15 years ago at a Tisket-a-Tasket auction.  Plus I also knew instantly that this was one of the University classroom chairs that were sold out of storage a number of years ago.  I sent the picture to Ian and he said - Purchase it! 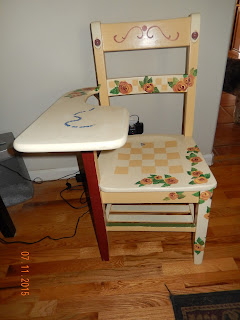 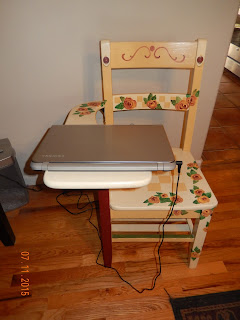 I love it and have made it the charging station for my laptop.  I can just sit down and flip it open.  I had a few minutes left before Mass so drove by Amy's house and had her confirm that indeed this is one of the University chairs.  She would know because she and Allison had decorated one for a University contest years ago when they were removed from storage.  I am thrilled. 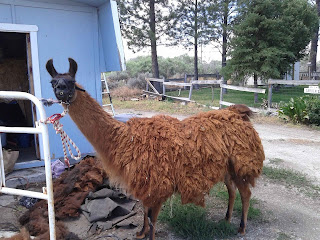 And when I got home, I had another treat - before and after pictures from Toni.  This is Zephie just out of the trailer. 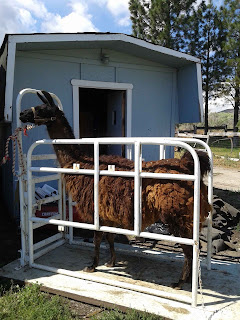 And here she is in the chute, waiting to be sheared. 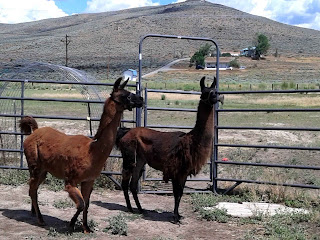 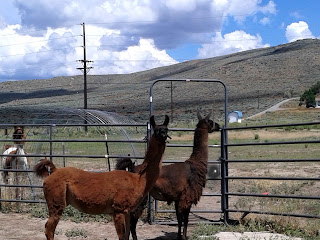 Here they are, looking really pretty after their new hair-dos.

I'm really looking forward to seeing your article in the magazine! I'm glad you got to share the process with your fellow weavers. LOVE that chair....that's the kind we had when I was in high school!