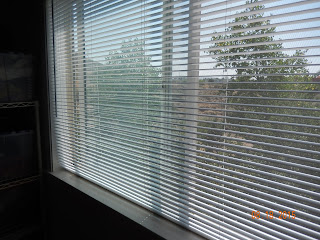 We had a handyman come out and install replacement blinds downstairs and a couple other things that needed doing to show the house better.  I liked the blinds so much that I asked Ian to pick up a couple more when he was in town.  And then I installed them.  Ian can't see to do it because of his bifocals so I just measured how the handyman did it and then did it the same way. 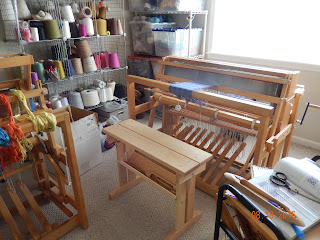 It's so much better!  The old shade rolled down from the top so to keep the sun off my loom, I had to drop the shade which radically reduced my natural light.  It's almost like day and night. 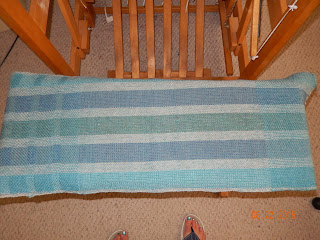 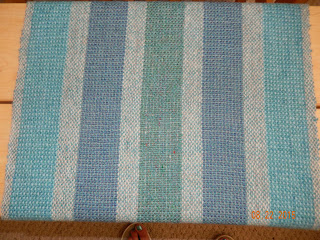 This is my first sample.  I like the appearance and hand of the plain weave but don't think it would drape well in a garment.  I do like the heathered appearance the two color-related warp threads make so might try that with twill. 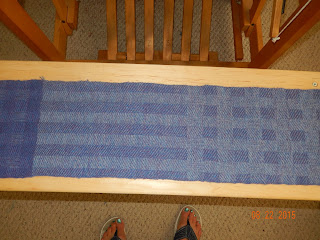 This is my second sample done on eight shafts which were so heavy that I had a hard time lifting them all the way up and the underside is a mess of skips and floats.  I might try to salvage this as a purse. 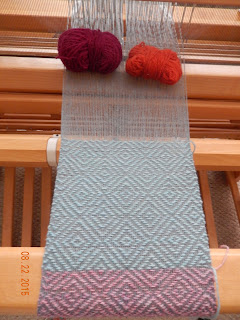 This is the third sample.  I talked to Laura about it yesterday because I was so frustrated.  She reminded me that wool stretches in the warp and will take up when tension is removed.  Once again my problem was that I was beating too hard.  She said "breathe the weft into place.  Make sure you can see daylight."  And that's what this represents.  The first several inches were a disaster.  It's much better here but not what I want to sew into a jacket.  This is a draft from Anne Dixon's 4-Shaft book so next I'll try the other two treadlings and then wet finish the sample. 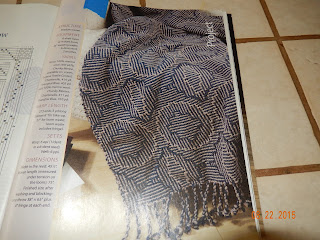 I still don't have an answer to what to weave from the Kellbourne Woolens yarn so have decided I need to make yet another sample.  Laura suggested color and weave or summer and winter.  I found this summer and winter pattern in a 2012 Handwoven and since I've never tried it before, I'm planning on this for my next and hopefully last sample. 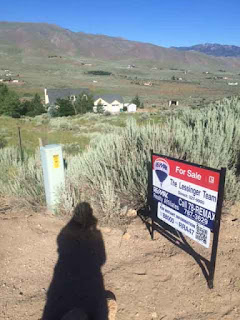 Meanwhile, there's the "elephant in the living room" - our house sale.  After I got home from subbing Wednesday, our realtor called to say that the first people who had looked at the house weren't ready to buy at that time but they're ready now.  Since we've only shown the house three times,  it had to be the woman who said that she liked the house but the property wouldn't work for horses and cows.

They came out about 6:00, and this time it was Jennifer and her husband Travis and daughter Miley.  They came first, followed shortly by their broker and her husband.  After standing all day, I stood yet another hour as we walked around and talked.  They had decided that it will work for horses and cows  after all and yesterday sent us an offer for $5,000 over our asking price to displace the contingent offer currently on the house.  That buyer still hasn't sold her home so she has until Wednesday to come up with financing or remove the offer.  But the new buyer is also selling their house to someone who is also selling their house.  There are currently four contingent offers associated with our house, not including the one we made in Oregon that we're going to let go.  I can only laugh.  What else can I do??

Laugh at the elephant; that's all you CAN do!