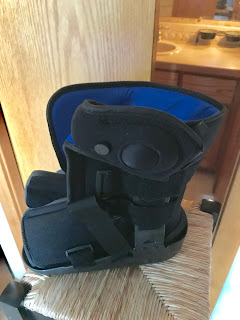 I finally have a surgery date.  They called me last Monday and scheduled it for February 28th.  I thought it over for a day and called back to request something later, so it's April 11th.  I don't want to drop my art class and I can't attend it on crutches.  Even the scheduler agreed with me on that.  Plus I'd rather not be in a surgical boot for Fiber Market Day, March 30th.  So here's my boot, still waiting for me.  I'm hobbling along a little better, thanks to the silicon metatarsal pads Ian got for me online. 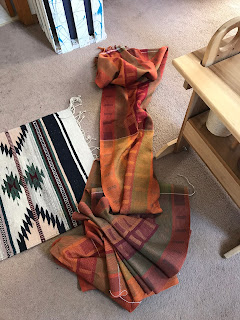 Plus, by waiting I'll have more weaving time.  I pulled these towels off the loom the middle of last week and got four hemmed when my sewing machine stopped functioning.  The needle only goes up and down in the same place.  I've done all the trouble shooting I can, and finally decided since this machine only cost $130 seven years ago that I'd see if I could find a replacment on Amazon, which is where this one came from.  It was supposed to be delivered on Saturday but it's lost in route and they're trying to locate it.  It's not a new machine but a refurbished one, another Brother.  Meanwhile I've had a doozy of a cold and have done nothing but read since Friday. 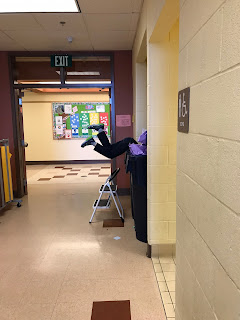 On Thursdays at Smart we get a break between our kinders, time to make notes in their file, time to take a breath, time to get ready to do it again.  I saw a boy "dumpster diving" in the hall leading to the kindergarten wing.  What?!!  It was too funny to not take a shot, and since his face is hidden, I knew it was okay.  I heard him explaining himself to one of our kinders:  "When you're older, like 8 or 9, and you realize you threw away the picture that you worked on so hard, you have have to work hard to get it back."  Priceless! 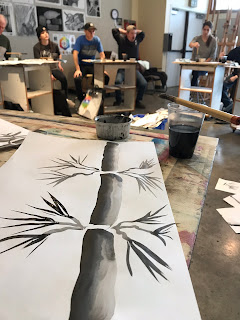 Last Wednesday our instructor moved us on from drawing with charcoal to painting with it in the form of sumi-e ink.  We spent the three-hour class period practicing the use of the ink, how to hold the brush and how to make brush strokes.  And then there was clean-up!  I think it's during the chaos of cleaning up our materials and moving tables and chairs that I picked up my cold.  Rest and Alka-Seltzer Plus have done wonders for my symptoms and I'm looking forward to going to class today where we'll finish up this module.  Wednesday we start something new. 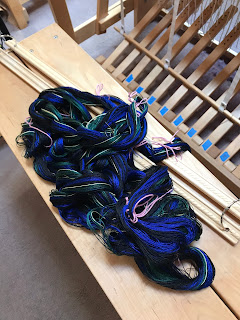 Last week before I got hit with the cold I manged to get this warp wound for two more Campbell tartan scarves.  I've sold the three I've made and am optimistic that I can sell another one next month.  This will be my fourth year as a vendor in this event and it will be the first held at the Deschutes County Fair Grounds which I think will improve foot traffic greatly.

I talked to Webs about a half hour ago and the Stone Green yarn that I'm waiting on is going to ship tomorrow and will be here sometime next week.  I'll focus on the scarves and be ready to do some blue/green towels, something I am sorely lacking in my inventory.  Other than having to continue living with this sore foot, I think it will all be good.  I'm glad to be able to keep busy as we are in the middle of a cold gray streak.