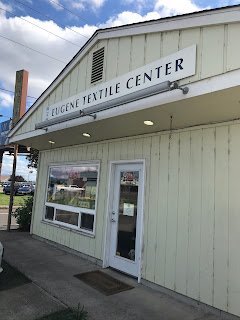 Ian and I made a day trip to Eugene yesterday.  We spontaneously decided that it would be nice to get over to the Valley again before winter weather sets in, and it couldn't have been a more beautiful day for an easy drive over the Cascades.  The timing was perfect since snow is in the forecast for Sunday.

I've never been to Eugene Textile Center before and this will be my only visit at this location as in another month they will have relocated to a building twice as large which will also house Glimakra Looms. 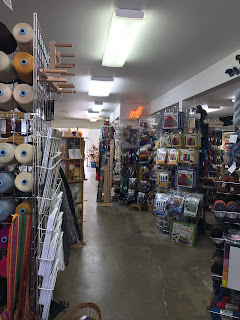 I had won a $50 gift certificate to ETC from the State Fair and decided it was time to buy a new raddle and lease sticks.  It's exciting to have such a complete fiber store within driving distance. 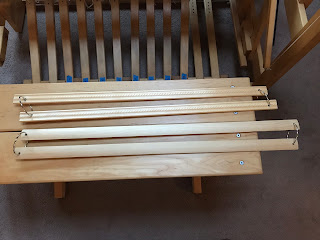 The top pair are the lease sticks I made that are adequate but not great, and on the bottom are the set made by Glimakra. 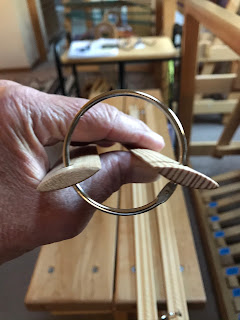 This elliptical shape is what sold me on them. 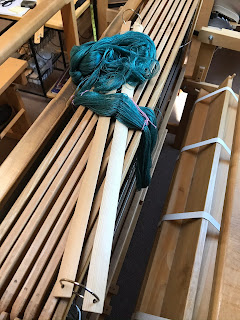 I wound a warp yesterday afternoon and put it on my brand-new lease sticks. 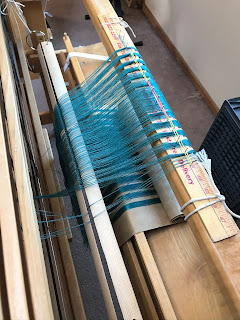 This morning during Delaney's nap I was able to quickly dress the loom.  I knew the new sticks were going to be an improvement and they're well worth every penny.  The yarn easily slid through them.  I also ordered an Ashford raddle to replace the one I made from a yardstick and nails.  It has to be custom made and Patty Huffer (from Redmond) who works ETC  three days a week will bring it over to me when it's ready. 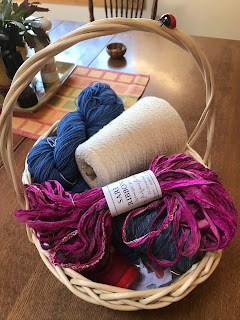 This is another prize I got from the State Fair.  No one knew anything about this basket at the guild meeting last week and it was presumed that someone left it behind after the meeting.  I got a call from our treasurer several days ago telling me that the basket actually was my prize and she would drop it when she came to Bend for Costco which happened to be yesterday.  She dropped it off on our front porch while we were in the Valley.

And to make confusing more confusing, I got a call from the State Fair office last Thursday letting me know that I have an additional prize awaiting me at the Outdoor Quilt Show office in Sisters.  We didn't know it but that office had offered to be the collecting place for entries from Central Oregon which were then ferried to the Fair in Salem, and somehow this prize came back after the Fair was over.  After playing phone tag with Dawn Boyd from that office, I am going to meet her when she comes to Bend next week for her hair appointment.  The award that just keeps on giving!! 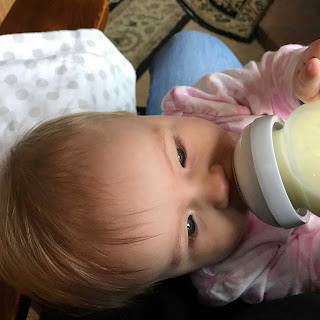 My daughter texted me this morning asking, "How is my favorite niece?"  I took this picture in my arms and said, "She's hungry!"
Posted by Sharon at 1:04 PM

I'm thrilled for you! Ironic, though, that the day you made a trip to the valley is the day I had to make a 'soccer mom' trip to Redmond. Ships passing in the day....