And June rolls around again. 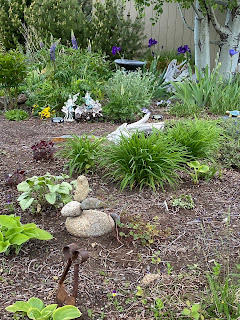 It's happened.  I'd rather do yard work that weave.  I've added six new hostas this year, bought bareroot in a bag from Costco.  They have to start from scratch every season.  You'd think I'd come up with something different since our growing season is so short.  Last week we had to put our hanging baskets in the garage so they wouldn't freeze and this week we're working overtime to keep everything watered in 90-degree days. 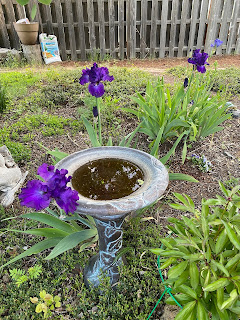 I was given these iris about three years ago and they finally bloomed - worth the wait! 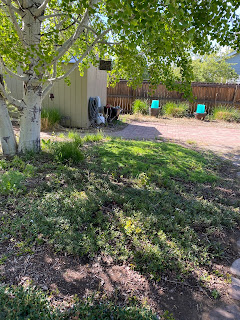 Ian moved the tomato pots from the back deck to the edge of the RV pad where they'll get full sun all day.  The blue things are Walls of Water, needed protection against late frost.  We've lost a plant or two every year but so far everything looks good.  That bright apple green area was barren dirt but about a month ago Ian spread some clover seed and covered it with mulch.  It looks great! 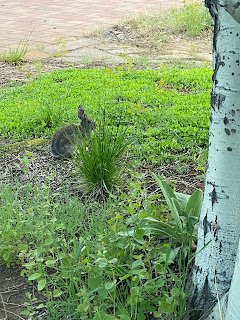 Our resident rabbit approves.  With his help we may not need to mow. 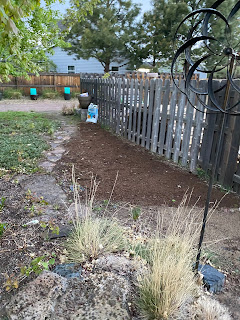 Every year we tackle some overgrown area and try to make it pretty.  This was a bear, pulling out everything including some raspberries that we regret planting.  They've encroached everywhere and I don't even like raspberries.  I bought some wildflower seed from Wilco that's specific to the PNW.  We covered it with a bag and a half of mulch and already we're seeing sprouts.  Supposedly the annuals will bloom this year and next year we're get flowers from the perennials. 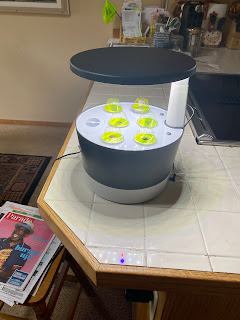 This is an AeroGarden that is a system for sprouting seeds in the house that we bought about 10 days ago.  Neither one of us has had any successful with sowing from seed.  Our friend Kathi bought two of these and said they ate from it all winter.  So far only the basil is growing.  It will be ready to set out just about the time the summer weather is in full swing. 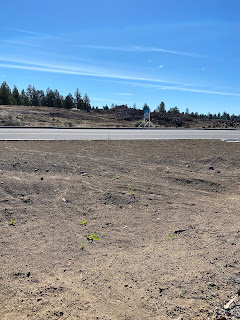 The large field behind our house was brought inside the urban growth boundary the year after we moved in, a sure sign that development was coming.  The new high school where I'm standing is completed and will open this fall.  This area of the field is where development is starting.  The trees are coming down and excavators are rehabilitating the landscape.  This is volcanic country so the excavators have their hands full blasting and removing rock.  There are 43 acres in all, including a park and businesses.  I hope that includes a coffee shop! 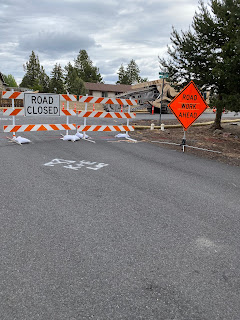 Meanwhile, this is what's at the end of our street.  Its construction on the sewer extension for the new development.  We knew all of this was coming but that doesn't make me have to like it. 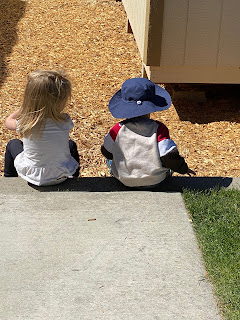 Our neighbor watches their grandson Jasper on Fridays.  He's three months younger than Delaney and the two have come to be friends.  Jasper goes to daycare a couple days a week so has other children to play with but this is it for Delaney.  I love watching them together.  Delaney's mommy knows to come next door when she picks Delaney up.  Next Friday we'll picking Alexia up in Lakeview and bring her home for the rest of the summer, so we'll have two granddaughters!!

Such a sweet photo of the two tots! I'm surprised hosta won't overwinter for you; maybe a heavy blanket of mulch? I know of much colder regions than mine where they thrive. (But not for me, 'thanks' to deer.)

We had a crazy late frost too and I had to cover all sorts of plants in the veggie garden. I had every extra sheet, and empty feed bag in use for two days!

Many hostas are hardy down to growing zone 3, so maybe look for a different variety?