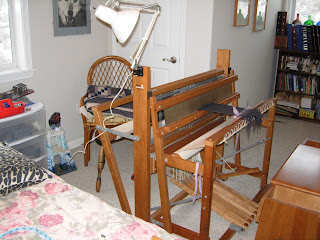 Our guests have gone and we aren't expecting any for a while. I have no excuses. I have owned this Nilus Artisat since last summer. Amy helped me find the rest for the arm that advances the warp when she was here for my birthday in October. Laura went over it with me when she was here at Thanksgiving. 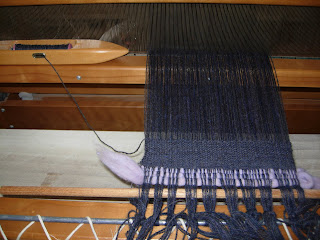 I have only woven on Gilmore looms so everything feels different. As much as I love the ease of changing tie-ups, I dislike threading the heddles. They are thin wire things that tangle with each other and don't slide well. Gilmore looms have removable beams so you can get right at the heddles without having to reach over the beam. On the other hand, the loom has a great wide shed and nice action. I notice that it tensions nicely so will try a rag rug next. 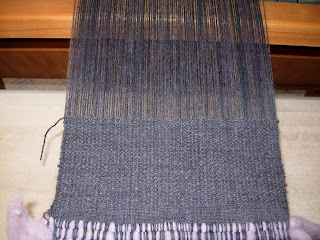 I had hoped that the first project off the loom would be something I could give Ken. It's been six months since I agreed to weave something as closure for his loss of LeeAnn and her weaving life. I chose this llama that I had overdyed in the turkey roaster to weave in rosepath twill. Llama is more hairy than I realized and makes for some pretty sticky warp. I think it's probably going to be scratchy. I'm also going to run out of weft. Other than that, it's the perfect project. 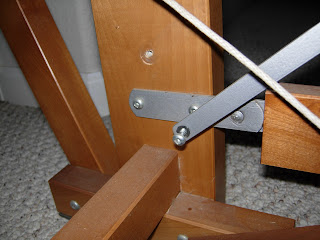 The loom is very light weight but this arm that helps provide stability has fallen away because the screw stripped the hole. I'm not going to weave on it again until I get some liquid wood and get this secured. So I'm winding some warp for the Gilmore.
Posted by Sharon at 4:32 PM

Try using hairspray on your warp. Get a pump bottle of the stuff and spray it on the warp behind the heddles and lightly brush it. You don't have to soak it, just mist it. It will stiffen the unruly bits and make the shed easier, and then it washes out easily in the finishing wash/rinse. This has always worked for me. I still am on my first bottle of hairspray after many years since you only need it on those sticky warps.
Lindsey

I used to have a 60" Nilus Leclerc. Loved it. Loved the way it worked. You'll get so much done now that it has it's own space. Send some of that snow my way!

Wonderful use of a spare bedroom. I'm sure your scarf will soften up after its off the loom and washed.
I know what you mean about looms. I'm so used to my Schacht looms when I bought a used Harrisville it felt so flimsy to me. I still can't get used to the hanging heddle bars.

It's interesting how different looms can be. I've never woven on either of the looms you have, so it is interesting to read about them.

Instead of liquid wood, get a bolt, drill all the way through the upright, and secure that puppy. It will be way stronger that way, and will stand up to your rug efforts.