The Surprise under the Quilt 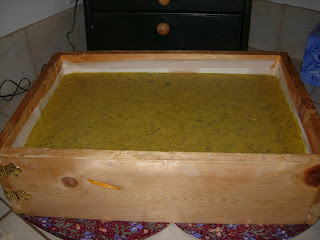 It was soap under the quilt - one huge block of soap. I've let my stock run out almost com-
pletely. This is the time of year that it sells best and a bad time to be so far behind. 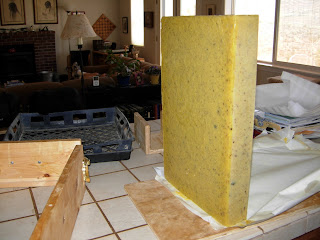 I lost track of time, apparently easy to do when you're retired. I somehow thought that we had another week here before vacation, but I realized today that it is this Monday when we leave. 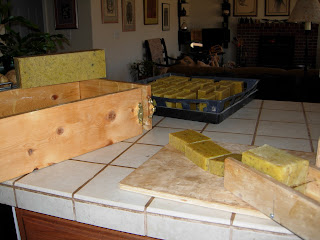 I'll make another batch tomorrow. I had wanted to have 200 bars curing while we're gone next week but will only have 100. Curing takes at least three weeks. It just means that I'll need to hustle when we get back. I finished my final hat for the Artisans' Store this morning and it's drying on the glass head. I can't remember a project that I've disliked as much as this one. This is the yarn I spun from the wool I blended half with mohair. I hated the feel of the yarn and the hat is heavy and droopy. It was would be great for a bald man because it's going to be too hot for anyone else. 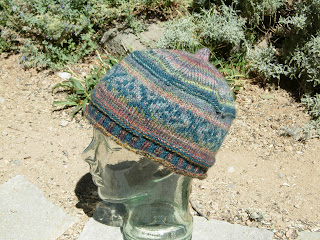 The image I posted of this hat yesterday really didn't do it justice so I'm posting another one - bragging rights.

We are leaving Monday for the Oregon coast and several days of camping. We'll visit my SIL in Washington just north of Astoria few a few days and then return to Oregon for a field trip to Woodland Woolworks. On our way home, we'll stay a couple of days in Bend to see DS who has started his job and is living there in their 5th wheel.

Yesterday I finished a book that one of the library patrons brought to me while I was still working. She knows of my fiber interest and thought of me when she had finished reading it herself. It's called Indigo Dying by Susan Wittig Albert. The title is a pun on a small Texas town by the name of Indigo that is struggling to survive and also on some natural dye workshops that are part of the story. Allie, the rancher who teaches the dye classes, has a small herd of angora goats and a guard llama named Shangrilama. I'm not usually a fan of murder mysteries, but I have to say that I'm recommending this one, if you haven't already read it.
Posted by Sharon at 3:12 PM

Tell us about the soap.....how did you make it.

I love the second hat -- in both photos! Perhaps you could recommend a pattern to me. I'm going to have four one-ounce skeins of homespun in different shades and would love to do a natural-colored FI hat. If four ounces isn't enough I could supplement the white/cream with some from my sheep.

And do I get to see you when you're up here this time? If at all possible, I am willing to drive somewhere, like Woodland Woolworks. I will be at OFFF on Sunday, helping Wally show his sheep in the morning. We're gone this weekend, but back Sunday evening. Email me, and I'll give you my cell number.

I love both hats! And I envy your productivity. And your soap! I really need to start soapmaking again. You're inspiring me in that direction.

The second hat is really lovely. I agree completely about mohair blends.

Have fun. Astoria is one of my favorite places. --syl

Read it. Have several more in the series if you care to borrow. :-)

I would never in a million years have guessed that hidden under the quilt was a giant amount of soap. (I was thrown off track a little because I thought it was a present for you under the quilt....but still!)

The colors of the hat do look even better in this shot. It's a great combination!!

Have a great vacation!!! Sounds fun!

That's one heck of a bar of soap.

I love the hats!!!!! And especiall the little "toppers". How do you do that?

I read all of Susan Witting Albert's books and enjoyed everyone one of them. Good book to take along on vacation.

I used to own and run "Pumphouse Wash Soap and Honey Company" here - and still get people calling for me to do soaps again. I shall send them your direction. :)