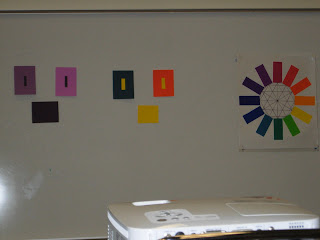 Today's class went from 10:00 to 6:00, with a half hour for lunch, rather like a work day. We started with "simultaneous contrast," something we're familiar with but she didn't just show us as a review. She made us pick out color cards of our choice, snip contrasts, paste them on and then evaluate them as a group. One of the things that we universally said when the class started was that we wanted to be able to predict our project results, rather than just do color by the seat of our pants. Laura has showed us color as used by painters, and today we begin to see how color works for fibers artists. 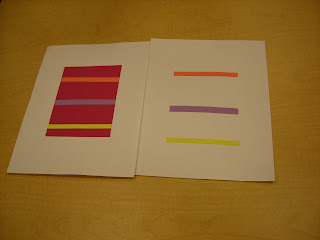 The hardest of all the exercises for me has been to determine value, i.e., where the color equates to the gray scale. Deb Metz says that a little yellow goes a long way. That's because, while it looks like a strong color, yellow is very high on the value scale. Laura illustrated with these strips. These strips are the same but don't appear to be so because of the different grounds. 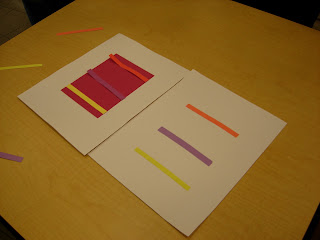 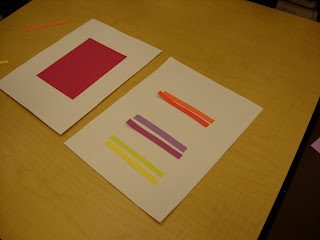 Look at this - it's crazy. The bottom strips are the substi-
tutes. We have now begun to talk about "optical mixing." It's how the cones of our eyes see colors, the same colors that printers use. We took our lunch break here and then came back to apply what we had "learned." 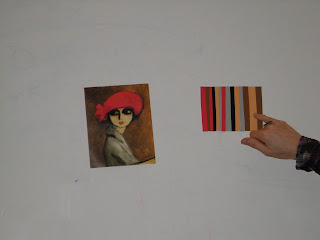 In this exercise we selected an imagine from the Houston Art Museum. We were limited to no more than five colors from the color cards and had to create a representation of our piece. 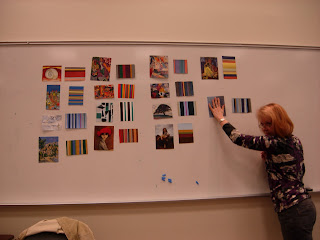 What impressed us to a person was how the colors we selected when we held our prints up to the colors cards at the table were not the colors that our eyes saw at a distance. That's when I realized how powerful the "value" of color is - i.e., where it fits on the gray scale. It's not obvious and it matters. I have some work to do. The one thing I know I will take away from this that any colors can go together as long as you adjust the proportion and saturation, i.e., use a tone or a shade.

While it was serious, it's been a long time since I laughed so much in the course of a day. I came away knowing that optical mixing is key to selecting successful warps and wefts, and I don't understand an nth of what I just said. 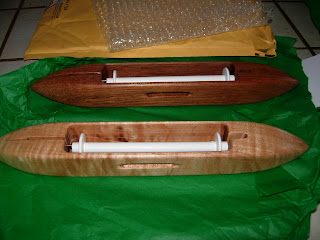 Ian took the dogs for the mail before I left and came back with a package for me. Thanks to Theresa's encour-
agement, I contacted Jenkins Woodworking. The website stated that Ed no longer makes shuttles, but Theresa said I should push, so push I did. My email went unanswered for a month, then Wanda came back to say that Ed had decided to make the two shuttles I had requested - what woods would I like. I said - not canary wood - you choose, so I have Brazilian cherry on top and and quilted maple on the bottom. While they look the same, the top shuttle has a lot more heft, and they both feel like a cuddled animal that you'd like to take to bed with you. Sundays are a designated reading day so I won't get to try them until next week. Drat.
Posted by Sharon at 8:42 PM

I would love to take those color classes and then have time to apply the knowledge to paint and yarn. No time in my life for that right now, though!

What a fun class - and the new shuttles are beautiful. T.

What a great class!
OHhhhh new shuttles. Both are lovely!

Sounds like a great workshop. It is amazing how our perceptions work to make colors interact. One my favorite books on the topic is Color and Fiber, amazon link: here
The shuttles are lovely...you will enjoy using them!

Amazing class! What you wrote made perfect sense to me. In fact, it's one of the better explanations I've read.

Gorgeous shuttled - I had never heard of quilted maple before.

I think I am going to "borrow" some of Scott's paints. Thank you so very much for sharing this class with us.

If I work out what you wrote in these two blogs, I think I have a lot of work to do. Let alone a class of 16 hours......
But I'll save these two messages in my 'colour book'.

The shuttles are lovely.

What an interesting workshop! There's really no end to what there is to learn about colours.
And no doubt you'll enjoy working with those lovely shuttles.

This sounds like a fantastic workshop, I'm quite envious! I've tried to read through two color theory books, but it all remains quite abstract to me. Thank you for sharing all this information!

What an awesome class. Wish I could have taken it! I love learning about colors and how they work together.

Do you have a Ruby Beholder? Wonderful little piece of red plastic that quilters use all the time to hold up to fabric to determine the value. It is really amazing how many colors you can put into a project if the value is similar. Wonderful description of the class. It must have been wonderful.