More Fixing to Get Ready 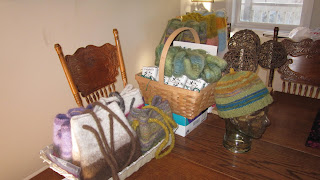 I spent the entire morning getting my things ready to take to the craft fair on Sunday - bags, hats and soap. I had just finished and had turned on the computer so I could print up some signs, when the power went out - again! And yes, I paid the bill. It was out for close to two hours. 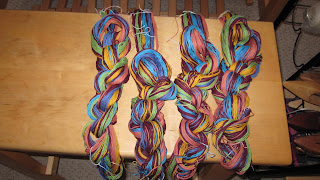 So I went upstairs and wound my baby blanket warp instead. I had a message on the answering machine when I got home from town on Tuesday from the Yarn Barn of Kansas. There was an error in the instructions. I called the next day and discovered that the instructions say wind 3 yards, but you really are supposed to wind 2 1/4 yards. Since I'm not going to make the hat and I'm going to do hem stitch instead of fringe, I decided to only wind 2 yards and hope that I have enough yarn left to knit a hat. I hope I didn't out-clever myself. 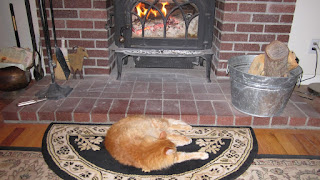 This is the coveted spot. All our animals want it but this time, Charlie is the winner. He warms one side of himself until he's just too toasty and then turns another side to the fire. 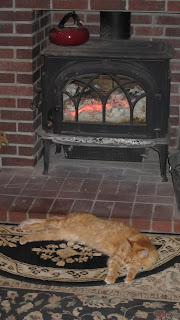 I just finished a book I picked up from the remainders table at Barnes and Noble in New York, called The Irregulars: Roald Dahl and the British spy ring in wartime Washington by Jennet Conant. There were a lot of familiar names in this history of the wartime relationship between Britain and the US. I learned a lot that I probably should have already known, like the Lend-Lease Act. My goodness, the "in the know" crowd had a lot of all-stars, like Lyndon Johnson and Ian Flemming. Only in the last chapter does Dahl become the childrens author that we know. It was a starred review in Publishers Weekly and I'm giving it 4 stars in my Library Thing.
Posted by Sharon at 6:20 PM

Beautiful colors in that warp and best of luck at the festival! LOL, you just need a bigger rug so everyone can get fireside seating. :)

I think Charlie has the right idea. Might get this book as a stocking stuffer.

Thanks for the book recommendation. We loved Roald Dahl's children's books around here, especially James and the Giant Peach. I thought I remembered something about some of his children's books being banned in the states in the '50's and early '60's, but there's nothing about that in his Wiki page.

Good luck with the warp. I like YB, shipping costs are kinda high sometimes, but their service is good and their catalog is very inspirational.

I love the spot Charlie gets to hang out in. I've been wanting to make a rug for in front of our stove for our kitty to use. When it's sunny though, he sleeps and rolls around in the patches of sunshine which stream though the livingroom windows.

Wow, you have been busy! I hope the fair goes well for you tomorrow. I will have to look for that book at my library. I love his children's books.

Charlie has just the right idea!! I hope that your craft sale goes well and that you have a good number of people there.

I love watching a cat bask in some warm spot - they are really the masters of the art of relaxation.