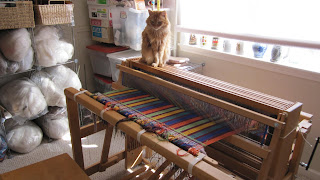 After I walked the dogs this morning, I decided to tackle the loom and at least get the warp tied on and the hem stitch done. I guess I was making a lot of noise because Charlie left his bed in the sun and decided to check up on me. 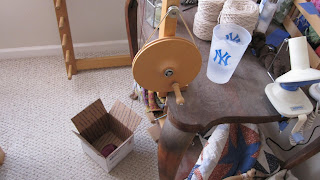 I've added a new piece of equip-
ment. Can you see what it is, and no, it's not my New York Yankees water glass. That's a very expensive plastic glass. I paid $10 to have it filled with Bud Light at the game. I probably would have paid that for the glass. Anyway, it's the USPS box on the floor. I've discovered that it's perfect for yarn balls that I want to wind onto bobbins. The balls stay in the box and don't bounce all over the carpet collecting cat hair. (I have a special vacuum for that.) 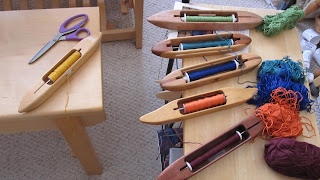 It's nice to have enough shuttles for all my colors. Theresa said the last time I made this blanket that it represented a lot of ends. It still does. But this time I have Laura's mother's shuttles and don't have to shuffle bobbins. 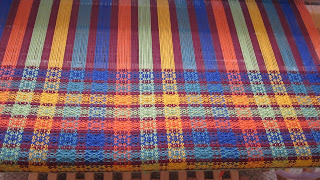 This baby boy will be born in May in California, and more speci-
fically, Laker country. Two important colors here are University of Nevada Wolfpak blue and Laker gold. All other colors are secondary - I had to work around those two. 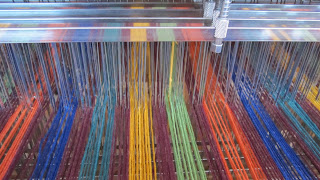 As always, I had an error, but this was my first time to need a string heddle. Can you see it? The gold vertical line? This was the absolute easiest warp I have ever had, thanks to Lisa's suggestion that I tie the tops of crosses with one color and the bottoms with another. Had I not caught a killer cold from, could it be Satan? (think Dana Carvey), this would have been done by now. I'm in love with this new trick and almost wrenched my shoulder patting my back at my successful heddle repair. 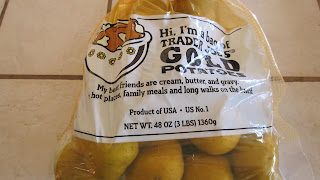 I asked Ian to pick up some new potatoes from Trader Joe's - the union office is nearby. We have gone through all of ours and I wanted them to go with broiled fish fillets. I love the package - allow me to digress: "Hi. I'm a bag of Trader Joe's gold potatoes. My best friends are cream, butter, and gravy. I dig hot places, family meals and long walks on the beach." I steamed them and yes, we had them with but 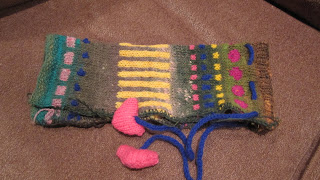 ter.
I realized tonight that once I "release this into the wild" I may never see it again. It's not like gifting a sweater or scarf. It might be stolen, desecrated and certainly damaged by the weather. The only memories I will have are the pictures I take. I could just put it in my own tree, but that's not the point. I dreamed about installing yarn bombs all night last night, and today I realize this isn't going to be as easy as I had thought.

Meanwhile, Alettte asked me what I meant by yarn bombs. I meant to answer her on her blog but I can't read Norwegian, though I do understand her photos of knitting. You can read about yarn bombs at Wiki here though it's an incomplete report. Walnut Creek, California removed a yarn bomb, saying no one can decorate public property without permission. It's meant as public art, but there's always that component of government in the middle. Allison tells me that this is her local level participation in Knit for Peace. I'm still thinking and hoping that my local government is nice but yarn bombs are a leap of faith. I realize that I have to be content in knowing that my work might be destroyed. Lots to think about here.
Posted by Sharon at 8:26 PM

Love the baby blanket, and all its colors. Your Charlie and my Leo should meet and see who's the sexier. And now I'm thinking about subversive yarn bombs.

I luv the colours in your blanket!
Yukon Golds are my fav potatoes :-)

Oh thank god no one made me a blanket with some of the colors of Boston teams, take your pick on collages...oh wait a minute. I seem to remember a scarf, a maroon and grey scarf, worn to death. Yes, MIT colors and if they had a football team I suspect it would be a sorry sight, but never mind, I digress ( a lot) and the blanket looks fab. I use a bowl to hold my yarn while winding and woohoo, that's a whole heck of a ton of shuttles. Good good!

Ann Arbor got yarn bombed several months. None of the bombs were nearly as beautiful as yours!

What a nice baby blanket! That will be a gift that will be cherished for years to come.