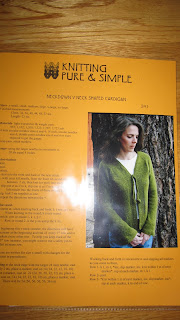 Today we started our play day at Jimmy Beans, which shares a parking lot with the main Verizon store. We had a horrible time getting a parking space because there was so much traffic. We asked a TV cameraman what was going on - the iPhone isn't released until the 10th. I know this - I'm a Verizon customer. He said it was because Verizon had gone down nationwide, and then started filming the two cars that backed up into each other in the melee. 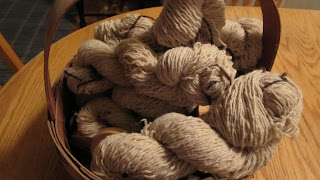 This pattern was what I wanted from JBW. I found it on Ravelry yesterday and it's exactly what I need for the yarn I'm in the middle of repurposing. I can't believe it's still serviceable after being knitted and frogged once before, but I really do think it will work up great in this pattern. I have finally come to terms that it doesn't work to force a yarn into a gauge that doesn't make it shine, and that's what I had tried to do. I can't wait to get this onto needles. Anyway, Melissa and I had a blast drooling over the gorgeous yarns but we each have a scarf pattern in mind and were shopping for fingering weight yarns. 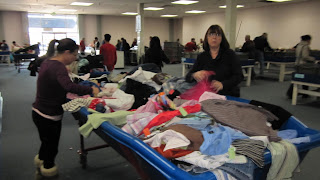 We had made arrange-
ments to meet up with Sasha at Goodwill after lunch. This is a terrible picture but it does show the tables for "flinging of the textiles" as E.L. Doctorow calls it. I have never seen Sasha laugh so much. It's impossible to do this with friends and not laugh. 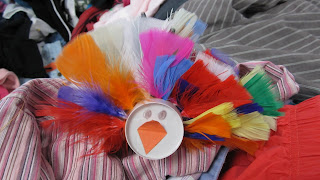 You never know what will show up on the tables. This is some child's school project - dixie cup with feathers and construction paper beak glued to the bottom. I spent $3.71 and came home with four garments, which was a great deal for an hours worth of entertainment. 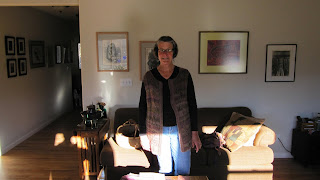 So the vest is done. The colors are fabulous, but the knit is very loose and the garment is pretty shapeless. I think it's going to take a shawl pin to make it stay in place. I'm also thinking a trip through the drier might be in order. 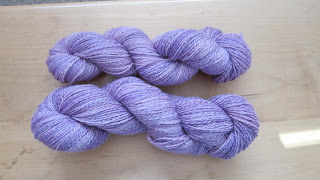 I need multiple projects on needles at one time so went through my yarns yesterday and decided to knit a mobius from this. It's Panda spun from Ashland Bay roving that I dyed in the oven - merino, bamboo and silk - heavenly soft. 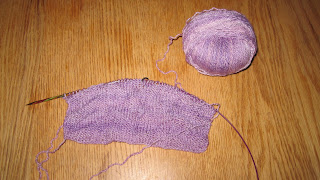 This is pretty close to the actual color and shows the color gradations. I think the pattern shows off the yarn very well. I've never knitted a mobius before but I like the idea of not having scarf ends in strange places. Ian and I followed a woman out of Costco one day who was wearing a very long scarf and the fringe got caught between her legs so that from the back, it looked like she was pooing yarn. 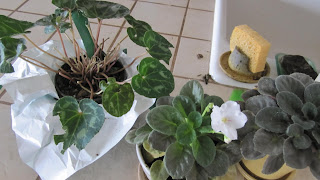 There is a reason why our house-
plants are African violets and Christmas cactus. Charlie doesn't like them. I went to pick up a new African violet at the grocery store, but the lady said she doesn't order them this time of year since they don't travel well. I bought this plant instead - it was gorgeous and cheap. It starts with a c but the only c thing that comes to mind is a venereal disease and I know that's not right. Anyway, it used to be lovely and I took this just before it went into the compost heap. The power of an 8-pound cat!
Posted by Sharon at 8:40 PM

LOL, yes, cuclamen. Okay, I would have bought the feathered thing. It surely would have made a fun package decoration at the very least!
What a wonderful way to spend Wednesdays. Good for you all getting away from the daily grind and kibitzing, all over. :)

My violets all died....not sure why, could have been neglect. It wasn't cat.

Love the vest, it came out great. I think that style of vest is generally swingy and loose fitting.

So much fun! I wish I had Wednesdays off and could join you. The vest looks great! My guys leave the Norfolk Island pines alone (mostly).

My goodness cyclamens must be delicious! I hope the kitty's tummy is OK after that tasty treat.

That pattern is great!

Nice day at Goodwill. It is fun going through everything and wondering about them, isn't it?