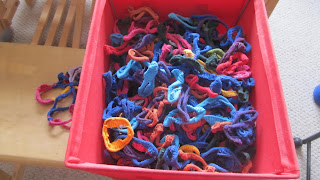 These are what have become known as sock loopers.  They're manu-
facturers waste, the part of the sock attached to the sock loom and then cut off.  They've found a use among weavers and other crafters. 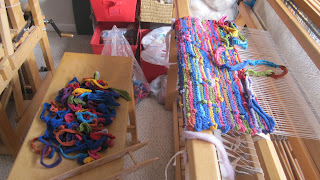 I'm looping them together and using them to weave a bathmat.  I bought these loopers for Alexia to weave potholders with but she's lost interest and I have just been storing them.  They've become part of my stash reduction program as well as a useful item.  We need a new bathmat.  Another motive is keeping warm.  This is the warmest room in the house. 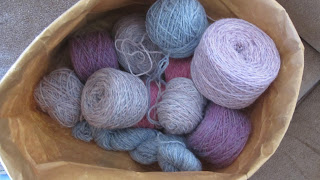 I sorted through the box of yarns, then separated and bagged the yarns by color and returned the box to the garage. I have selected these for my first sweater.  I'm sure there have to be five more sweaters of yarn in the box.  I've decided to go mild on the first one but to use everything, I'm going to have to go wild. 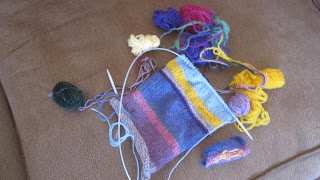 I was going to throw these bits of yarn away that I found in the bottom of the box.  Then I realized that all those colors together would make a good yarn bomb and I decided who the perfect recipient would be.  Me! 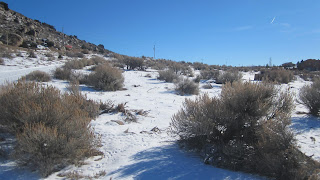 I waited until it warmed up to 18 degrees and then bundled up so I could take some measurements at the gate.  We're going to have a Superbowl Party and I want it to be done and installed by then. 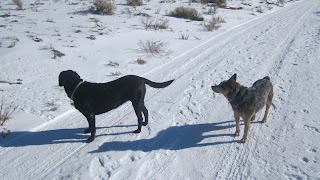 The dogs were really disap-
pointed at the brevity of our "walk."  They had been dancing all around me because it's been two weeks at least since I've walked them.  That's how long it's been below freezing and some mornings, below zero. 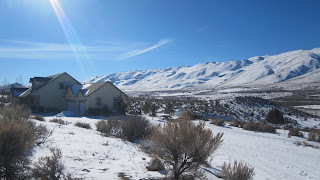 It's beautiful but so cold.  The air hurts to breathe and to think that my parents lived in Fairbanks when I was born.  Because I had asthma and bronchitis, they eventually moved to San Diego.  I wanted to live in a place that has four seasons, but I didn't expect to live in Narnia, where it's always winter but never Christmas.  We're going to warm up soon and then I'll be back to complain about the mud.

I love your scenery and your vivid blue skies. Our winter skies are normally dull and grey. On the few sunny days we get, the skies tend to be a pale, watery blue until spring comes.

The loopers make a great bath mat......it is beautiful where you live, but not sure I could deal with it.

I can't wait to see your yarn-bombed gate! What a fun idea to yarn-bomb yourself.

That last sentence made me laugh :-) A good way to start the day.