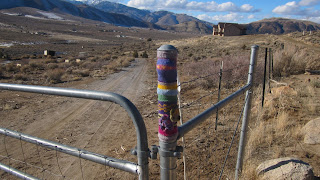 The weather has been kinder of late so I was finally able to stitch the yarn bomb onto our gate. I'm thinking about making one for the top bar.. 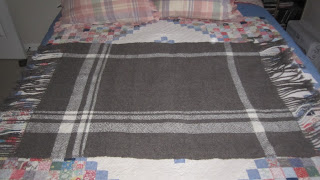 I finished the lap robe I've been weaving for Noah's Waldorf school fundraiser later this spring.  We're going next month to grandparents day again so will be able to deliver this and I'm really happy with it.  The gray is from a sheep in my brother's flock and the white is from one of our boys.  It's bi-flockal. 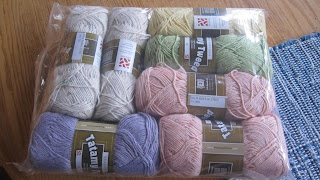 My great-grand-
daughter is due March 7th.  She is the daughter born to the son my daughter surrendered for adoption when she was 16.  Phew - that's a mouthful.  Thanks to his fabulous adoptive parents, we've been able to participate in his life for the last five years.  Christina and Alexia are flying back in April to meet the new baby - grandma and aunt. 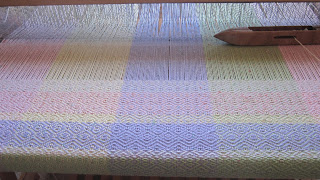 I bought the baby blanket as a kit from Yarn Barn.  It's been an uphill battle for me, by far the most complex thing I've woven.  It's really wide and that's a new set of problems - reaching and proofing out of sight danglers.  It's really fiddly - I hope I like it when it's done because I don't like it right now. 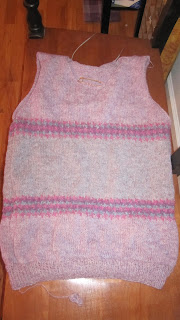 I've been knitting on a sweater from my massive collection  of Smith and Jamison Shetland using a pattern from the latest Vogue Knitting.  I said it was a swatch and it has been.  I've learned a lot about stranded knitting in this exercise. 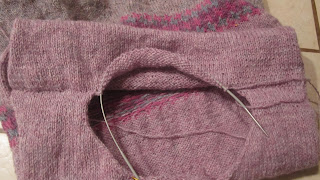 And since it was a working swatch, I seamed the shoulders differently. The one on the left is the two needle bind off.  The one on the right is where I bound both shoulders off and then mattress stitched them together.  I've always loved the exactness of the two-needle bind off but now I can see that it looks like it was machine stitched.  I won't use it again.

And news on the substitute school librarian front.  I got a call late last week from Shiree, the program coordinator.  She said she was ready to train me on the new catalog and also have me sub for a day.  It turned out that I and another sub worked at a high school on Tuesday while their staff trained school librarians on the new catalog.  It was so much fun.  Most subbing will be in the elementary grades since they have one staff person per library - I'm good with that.   Lemony Snicket, here I come.

As for the books I've recently read and liked:

Round House, by Louise Erdrich
My Mother was Nuts, by Penny Marshall
Blue Latitudes: Boldly going where Captain Cook as never gone before, by Tony Horwitz
Gone Girl, by Gillian Flynn
The Sense of an Ending, by Julian Barnes
Shadow of the Silk Road, by Colin Thubron

Ooooh...I'll have to look for that Tony Horwitz book. I loved his "A Voyage Long and Strange".

Also loved The Round House and The Sense of an Ending (which is our book group selection next week). Just downloaded Shadow of the Silk Road to the e-reader.

I'll bet you like the blanket once it's off the loom and finished. Congratulations on the new great grandchild!!

I love the bi-flockal lap robe. It's beautiful! Someone at that fundraiser is going to snap it up.
The baby blanket looks like a pattern needing concentration. Just remember that what you think might be an unfortunate choice, someone else will think it's awesome. I'm sure that it will be well appreciated, regardless.

I'm sorry the baby blanket is so fiddly but how exciting the reason you're weaving it! That whole story makes me tingle with joy.

Love the yarn bomb - you're making me itching to make one for our gate. Did you just use leftovers? I've got lots of leftover Lamb's Pride.