The Best Laid Plans or Nobody Expects the Spanish Inquisition 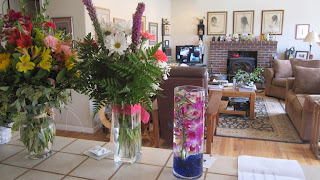 I never got to the farmers market and Sarah's rugs are still here.  I was moving along at an impressive clip, getting warps onto both looms by the end of last Saturday.  About midnight I got up to go to the bathroom and that's when all my plans changed.  I experienced loss of consciousness and when I came to, my face was pressed to the tile floor.  Ian called 911 and our local VFD EMTs came promptly and stabelized my neck.  Both Careflight and the ambulance arrived at the same time but the helicopter wasn't able to land so I endured a jouncy ride to the hospital.

I've never ridden in am ambulance, been admitted to a hospital or had a catheter.  I've never received flowers and cards so had no idea how powerful they are in communicating the nearness of caring family and friends.  Everything went right after the fall went wrong.  I had an amazing neurosurgeon who fused my broken C1 vertebra with a screw through the fractured C2 vertebra.  The surgery took nearly two hours and was done through an incision in my neck and the roof of my mouth.  Dr Demers said it's a routine half hour surgery but it took 45 minutes just to align the two vertebrae because of the angle he had to work at. 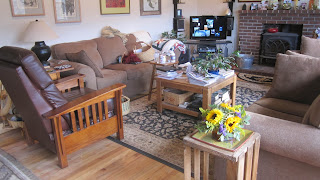 I was released home on Friday just after lunch and now this is where I spend my days and nights.  I have three months of the cervical collar and then can expect full healing to take during the rest of the year.  Thanks to the first responders and immediate intervention, I have experienced no neurological compromise, no tingling in my limbs or weakness.  Sleep is the hardest because my head is so sore from bouncing around on the floor.  A friend loaned me a shower chair and I've used it twice now - aahhhhh.  It's the little things that are starting to matter big.

So I have move from craft fair readiness to no craft fairs.  My marker is officially in the Out-of-Office spot.  I'll be able to return to weaving but there's going to be some physical therapy before then.  I have knitting and reading and lots of both.  I'm hopeful and I promise you that I will be the most compliant patient my doctor has ever had.  The most likely culprit of the syncope is the blood pressure medication.  It's possible that we'll never know.

Sharon, life changes on a dime. Best wishes for a speedy recovery!

Oh my gosh - how scary. So glad all turned out well in the end.....well, except for now having to deal with recovery. I'd been wondering why there hadn't been a peep out of you for a while.

Oh no! Hope you heal well and fast!

How awful. Getting old(er) sucks!! Get well soon. I don't remember if I've commented before, but I've been reading your blog for a while, and I enjoy it.

Ouch! Heal well and completely, and give yourself the time to do both. Weaving and craft fairs can wait.

Oh Sharon! You and my MIL have much in common right now, except she doesn't knit. You are so in my prayers!!!

I'm sending my wishes for fast healing and plenty of yarn to knit and books to read.

Oh no, Sharon! I didn't expect to read this. Speedy recovery, and thank goodness for modern medicine. I'm sending healing vibes in your direction. I hope that you can at least read and knit while you're convalescing.

Oh dear, Sharon I wish you a speedy and full recovery. Just think of all the wonderful books you now have time to read.

Glad that you have been in good hands, and praying for a full recovery!!!!!

Sharon, That story is scary in so many ways. Glad that Ian was there and knew not to move you. If I'm counting your dates correctly, that was the weekend of the feast of St. Michael.....guardian angels, indeed!

Wishing you a good and complete recovery with lots of good reading and knitting time. Maybe it's time to try out a zoom loom?!

Oh dear, you really took a hard fall. Am glad that things are going well. This is your time to learn patience....but considering you weave and teach and all, you must already have some patience, Hugs (gentle ones), and prayers for you and Ian