Getting Ready for Holiday Sales 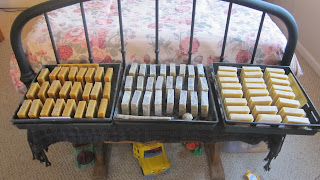 After two weeks of subbing followed by the natural dye workshop, I knew that I had some serious work to do this week if I want to have anything to sell in the last farmers markets of this season and the upcoming craft fairs -'tis the season.  The worst to be behind in is soap since it requires weeks to cure.  I made three batches this week, and since I only have one mold, I can only do one batch a day. 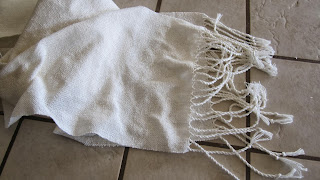 I also finished weaving the four undyed rayon/silk scarves.  They look terrible when they come off the loom and it's hard not to discouraged - they're stiff and look like gauze bandages.  They're one project that truly isn't finished until it's wet finished. 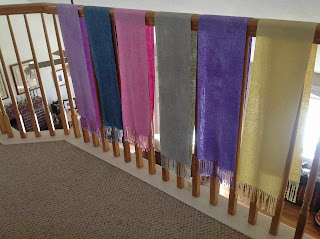 They're worth it though because they finish up very nicely.  The yellow and green ones are from last year so I'll have six - I'm feeling better about Sunday though I still have very little soap. 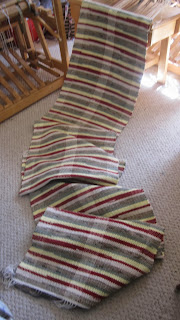 The real push though was to finish the two commissioned rag rug runners.  I pulled them off finally about noon today.  I used every bit of the six Goodwill sheets I bought and was getting nervous that I would run out but I didn't, and that's what counts. 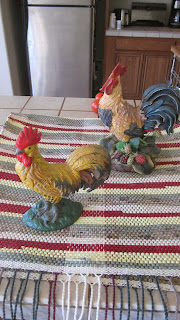 My client wanted them for her kitchen that she said was decorated in Red Rooster.  I'm not familiar with that theme but have a couple of roosters of my own that I used to direct the palette. 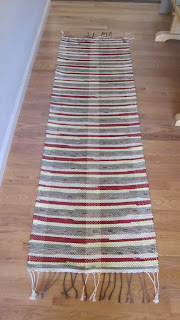 I put one down in the hall because I don't have any place to put both of them.  Her kitchen must be really big.  I absolutely love them. 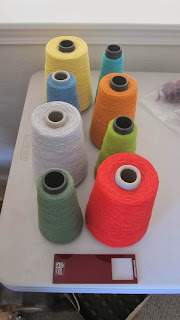 The next order of business is to get warped for more dishtowels.  I've chosen these colors and with the help of my Ruby Beholder there in the foreground, arranged them according to value.  Believe it or not, that bright red has a color value very close to the yellow.  It helps me avoid creating stripes and get a more random effect - I hope.

My Neoworx counter emailed me this week that I had a visit from a new country - the Faroe Islands.  Check it out!  I'm always amazed at the global reach of the Internet and wonder how on earth (pun intended) someone from islands near Greenland found their way to the northwest corner of Nevada and me.

The runners are lovely, and wow are they long! You're right -- that must be quite the kitchen.

Gorgeous as usual. The rag rugs are really striking! It's always so much fun to see how things change without the loom tension and with finishing.

Looks like you're doing a great job of catching up with creating for the fall sales.

Love that runner. And the roosters match very well.

I think you got that essence of rooster perfectly. The runners are beautiful.

Your scarves are so beautiful! Not sure the price, but considering silk + hand woven, I am sure I can only enjoy looking at them!