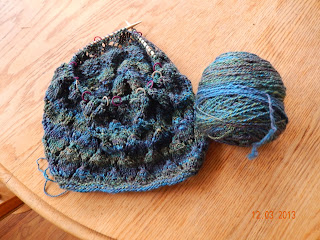 I got an email from Hermi Hiatt, telling me that even though she broke her neck 20 years ago, cold still causes her neck to ache.  She send me a pattern for a cowl and I got busy.  First I tore out a scarf I knit at least ten years ago and don't wear.  There was enough for two cowls, one for me and one for my daughter.  Then I started cowl #3 with this yarn I spun when Melissa visited me last August. Chrissie works the UNR football games as a part-time job.  She says the cowls make the difference between being comfortable and being miserable. 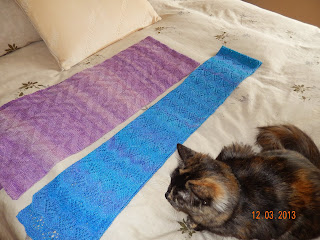 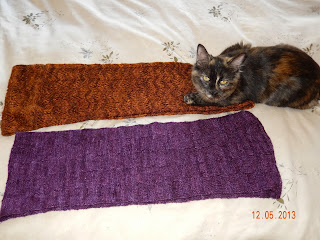 I didn't want to tear out and reknit other scarves so I pulled out four I've knit (and don't wear) that have no fringe.  I decided to sew the ends together and wear them like "infinity" scarves.  I don't like messing with scarf ends in the house and I was thinking about what I could wear every day.  It's cold here this year.  It was -7 when I woke up this morning. 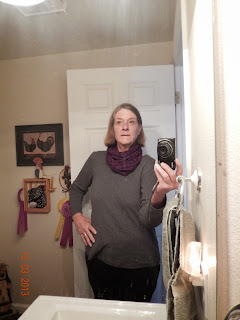 This is a double wrap - very comfortable, very warm and I think very cute. 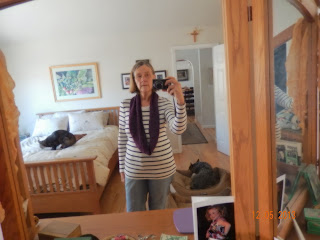 I like to wear them like this too. I'm especially happy that I've put four scarves to use that I've never used before.  They're really pretty!  As you can see, I've lost a little weight.  I think the problem is my broken nose which still hasn't been dealt with.  I have an appointment with an ENT on Wednesday. Breathing is a problem. 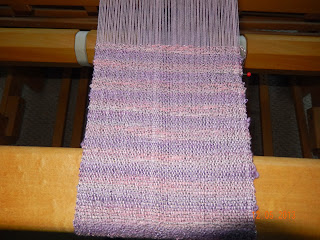 Meanwhile, I've been released to weave and I'm trying to pick up where I left off.  I'll be the first to admit that I'm not the sharpest knife in the dishwasher.  I don't know why I used a 8 dent reed for a 20 epi warp.  This loom has a 10 dent reed!  I struggled with the entire warping process so it's no surprise that I have a significant error.  At first I wanted to cut it off and call it exercise.  Now I think I'll weave a little longer, then sew the ends together and give it to Alexia as an infinity scarf, and then I'll start over.  I can't make me finish this mess. 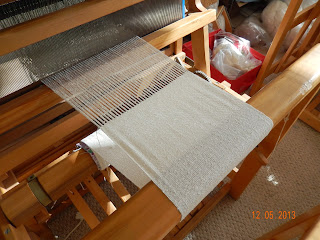 Meanwhile, I'm also weaving scarves.  I'm happy with them and after the pink disaster, I'm glad I started back to weaving on something simple. 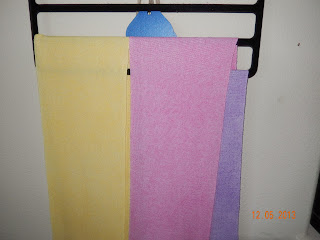 After the fringe is twisted and they're dyed, they'll look like these.  A neighbor called and wants to buy three for Christmas presents. Kris, my physical therapist, wants me to weave and walk to build up my leg muscles which have lost strength with all the enforced rest.  Still, I have to limit my weaving to 20-30 minutes at a time. 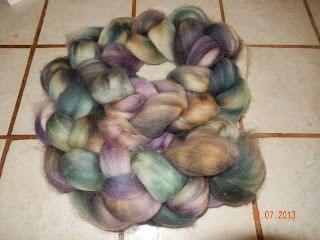 I haven't done any spinning since Melissa was here.  Ian and I got to talking about it yesterday.  He reminded me that it's a good leg exercise - I used it for PT after my knee surgery.  I decided to start spinning again in the mornings with my coffee and SAD light, starting with this. Melissa left it for me and several others. They will keep me busy for a while.

I've decided that spinning is going to have to substitute for walking until the temperatures rise a little. Just the same, weaving and spinning are my cup of tea when it comes to an Rx for physical therapy - to tolerance.  It's easy to get tired. 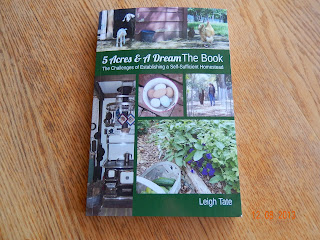 On a different note, I learned this week that Leigh Tate from Five Acres & a Dream has put their homesteading experience into a book.  I ordered it from Amazon and it just arrived.  She has done a fabulous job, and even if you're not interested in living a self-sufficient life, she has written like the friend next door - you just want to know more.  Five stars!

What a fantastic idea for the scarves. I never cared for messing with fringe either, so I love the "twist" (ha ha literally and figuratively :) I have to say that roving is really pretty and looks fun to spin. And hurray for being able to start weaving again!

Thank you so much for your kind words about my book. They mean a lot, coming from a book connoisseur such as yourself!

When you wet finish that scarf, you may find that the sleying error disappears. Even if it doesn't, Alexia will love it!

Glad you're coming up with alternatives - it's been so cold - I've been hibernating in the house for 5 days! Last night is the first one that I didn't get up to keep the fire stoked, and it was pretty chilly in the house!! But the outside temperature at 8 am is almost what our high was yesterday (23). I'm hopeful that I can get the ice floe chopped out of Tang's tank by the weekend!

I am so glad you are back to weaving!! And using unworn scarves is an awesome way to get some cowls made.

You will love Leigh's book!!!