Blogsy is Back and I'm So Glad! 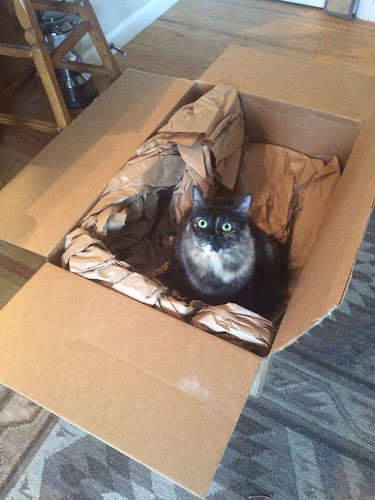 You would think that this box came expressly for Maddie. She claimed it as her own and it's still here, mainly because when she plays with her box, she doesn't bat ornaments from the tree. 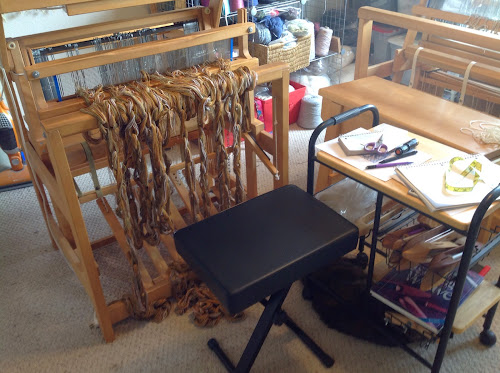 This is what was in the box, an adjustable Yamaha piano stool. Even at it's highest, it's 2" shorter than my weaving bench so I decided to sley a warp to see if reaching up the 2" additional inches would be acceptable and it was. The thing is, the piano stool costs $30 with free shipping whereas a weaving bench runs around $400, plus shipping. Note the kitty under my rolling work table. 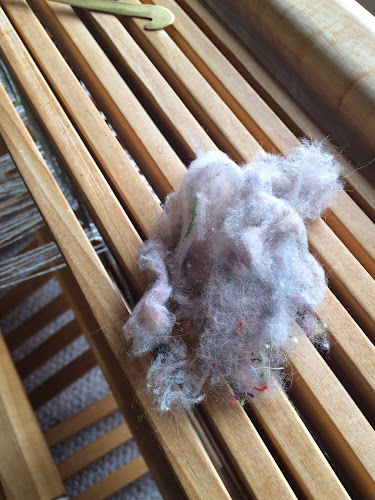 Both my looms have been nekkid and I'm trying to get them warped. I was threading Arthur when I noticed some link squeezing up between the harnesses from underneath. I started pulling and it kept coming. I know I have dust bunnies all over the floor but I never dreamed I'd have one this size *in* my loom. Somehow it was hovering between the top of the jacks and the bottom of the harnesses. Someone asked me if it has a name :) 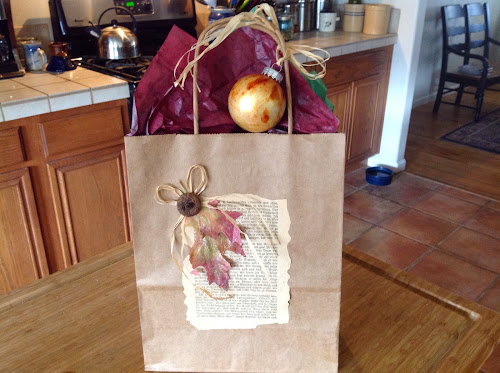 I wanted to share this very clever idea that one of the ladies from my Tuesday Book Group brought last week. It's simply a brown bag and a page torn from a book with an interesting font. She tore the deckled edges, then glued on the leaf, button and rafia bow. She made the matching ornament by putting the paints inside and tying with another rafia bow. The colored tissue paper completes it. I see inspiring ideas on Pinterest but don't know how they're accomplished. Darlene explained this to me. I get it! 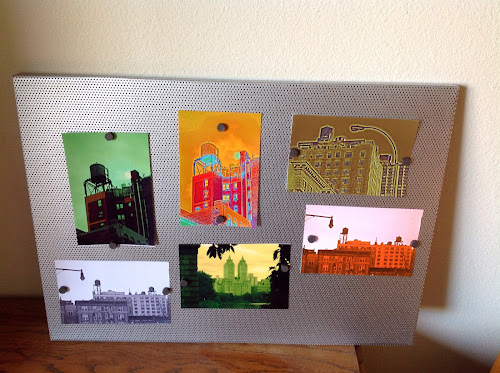 I've been on a buying spree lately and just got this magnetic bulletin board on the recommendation of a friend. I told him I don't have any way to display my photos. He's a photographer and said this is his solution, then sent me the link. He keeps his photos in a portfolio, then the first of each month he refreshes them so he gets to enjoy different ones from month to month.
Playing with my photos also has inspired me to finally get all my electronic photos sorted out and into folders. Over the years I've just let the photos download to a folder labeled by the date of the download, back to 2010. Every so often I'd be spurred to clean up this mess and then get overwhelmed. I've taken an hour a morning lately to get this under control. As of yesterday I've deleted 3 gb of photos and gotten the ones I've kept organized into named folders. I'm finally working on 2013. When all photos are in folders, then I'll go back and review each folder. And because I don't feel rushed, I'm able to enjoy the memories these photos represent. 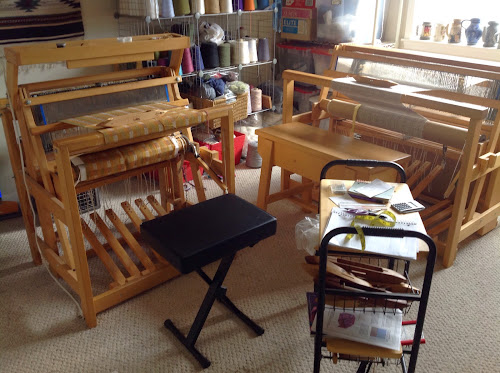 And finally, both looms are dressed and in business. I'm weaving towels, twenty of them between Maudie Mae and Arthur. I've woven on the piano stool for several hours and while it still feels awkward, it's not an ergonomic problem. I really do like having two benches. This is the first equipment I've purchased since I bought my Schacht end-feed shuttle two years ago. Like I said, I'm on a buying spree. I've also ordered an Bluster Bay end-feed shuttle that's supposed to arrive Friday. We leave for SoCal a week from this Saturday so I hope I'll have a chance to use it in this next week.

Posted with Blogsy
Posted by Sharon at 3:17 PM

I have a friend who brought one of those piano benches to a workshop to use at her table loom - seemed to work great. Thought about getting one at that time but never got around to it - might think about it again.

Your are on a roll, woman! Lots of good work happening there; sometimes that takes some new stuff.

How do you decide which loom to work on? The only reason I'm dressing my Gilmore right now is that I'm waiting for a new temple for Sophie. And I'm seriously thinking of finding Gilmore a new home. (I do have Julia, another loom, set up. I haven't touched her in months!)
And welcome soon to So. Cal. We should have some warmer, drier weather for you by next week.

Maybe if you got a pillow of some kind or a chair pad it would boost you up a little bit more.