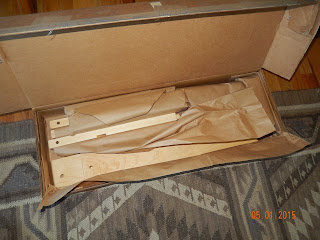 My Schacht weaving bench arrived in this small but very heavy box - actually it wasn't a bench but all the pieces needed to assemble a bench.  It took me quite a while to get it together, partly because I had to Google for images of the hardware.   They said I had four carriage bolts and four truss head machine screws but I had a hard time telling the difference between a lot of the hardware included. 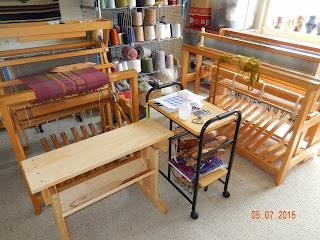 I really like except for one thing.  It was option to slant the top or keep it flat.  I'm tall, and since the Gilmore bench is slanted and I like it, I opted to set this bench at a slant.  I don't know what the difference is but I keep sliding off the front and am going to have to take the time next week to undo it and make the top flat.  I dragged the Gilmore bench out and am pleased with the space it has left behind.  I really don't think I need a second bench.  This one is solid but it's also easy to move it from one loom to the other.  I'm taking the Gilmore bench up to my son's the end of the month for a complete overhaul and then I think I'll sell it.  We also put my Dorset workshop loom in the car this afternoon for the learn-to-weave class tomorrow.  I was surprised that the bench weighs more than the loom! 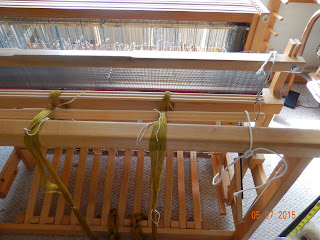 Since I was putting another short warp on I decided to give the flat lease sticks another try.  Getting them tied on was a little awkward on Arthur because he's 40" wide and one end kept falling while I tied the other. 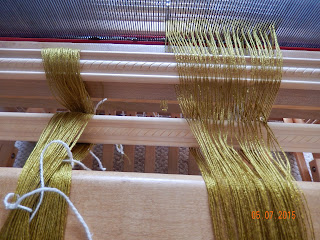 I must say that the flat lease sticks are a clear winner over the round ones attached to the breast beam.  I like being able to see the cross. 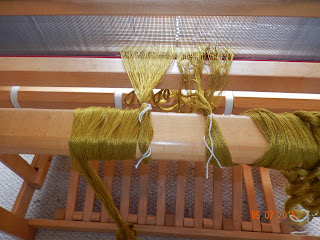 I got frustrated trying to find the pairs and sley them so put the second bout in my hand.  Within five minutes it was done and much neater.  I've decided that when warping no more than two threads per dent, dressing the loom from the front with the cross in my hand is the method for me.  More than two warps per dent really needs to be warped from the back with a raddle and lease sticks.  That's my story and I'm sticking to it! 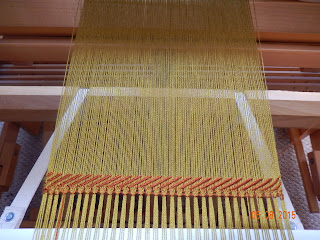 This is not what I had expected! 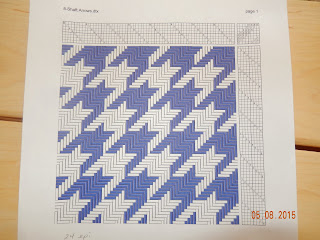 I triple checked the tie-up and kept staring at the draft, willing it to tell me what I was missing.  And then the obvious hit me.  It's a two-color weave and I only warped one color.  So I unwove and spent some time looking through the 8-shaft drafts in Strickler's book.  I've found one that I've been wanting to try anyway and will only have to change the tie-up.  Always the beginner.  The only good thing I can say is that mistakes no longer strike fear into my heart.
Posted by Sharon at 1:39 PM

Hi Sharon...we've all done that sort of thing (missing the color & weave part of the draft).

FWIW,when weaving I always sit on a square of that stuff one puts under throw rugs to keep them from slipping. It's kind of rubbery and open meshed, but I don't have a name for it. Mine came from Home Depot, but I'm sure you can find it anywhere that sells area rugs.

I am short, so am quite happy with my flat loom bench that hubby made to my size.
While it wasn't what you expected, it was still an interesting outcome, with those distinct angled stripes. Sure would be a great way to tell if your beating was even and balanced.