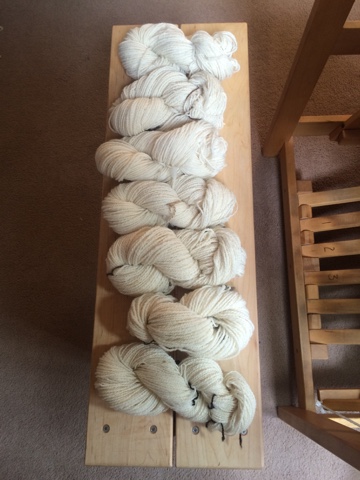 I was so inspired by the NWRSA meeting that I came home and pulled out the bag of Romeldale/Rambouillet roving that Sue Flynn gave me a couple years ago.  I had no plans for it so my spinning has been intermittent.  I took care of that - it's done! 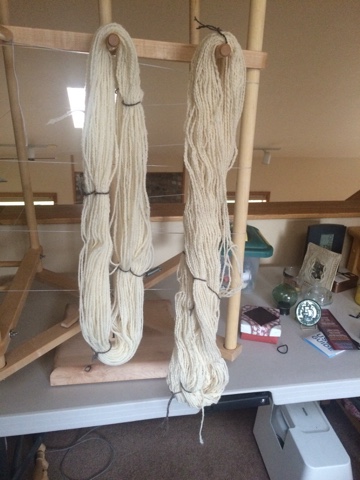 I have done very little spinning with fine crimpy wool and was really surprised at how much shrinkage occurred when I fulled a skein.  It's really lovely yarn and I'm knitting a swatch to determine what happens next. 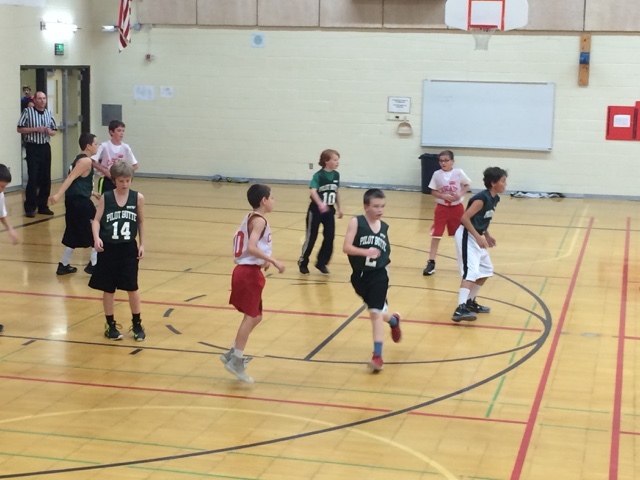 We had two 6th grade basketball games this week, there will be no games during Thanksgiving week, and then two games a week for three more weeks.  It's a really short season and Evan (#2) just started playing a couple weeks ago.  He really likes it and we're having fun watching the games with other parents and grandparents. (Click for big) 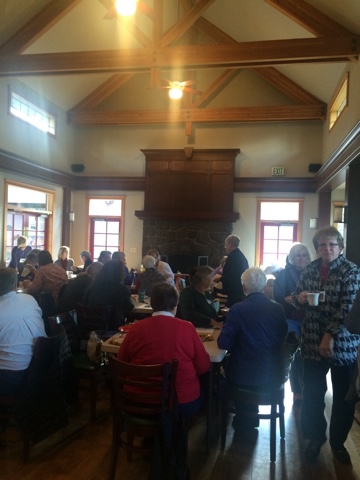 Wednesday was the last meeting of the Central Oregon Spinners and Weavers Guild (COSW) until February because of winter weather so they call this their Christmas meeting.  Laura and I went together and several of the ladies from the NWRSA meeting were there. I'm already signed up for a Overshot weave/study group and a Crackle Weave workshop in March taught by Susie Wilson.  I can tell by their Show-and-Tell that this is an active creative group, yet not a competitive one - bonus. 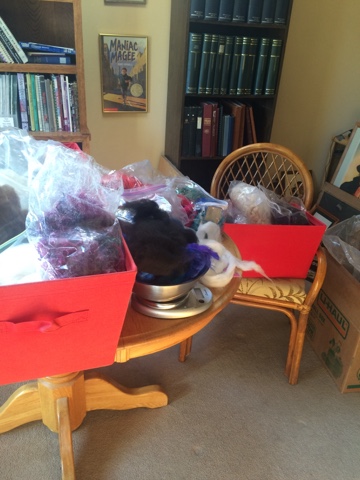 I decided today that it's time to card some fiber together to spin a scarf warp.  I've got three bins of stuff to chose from. 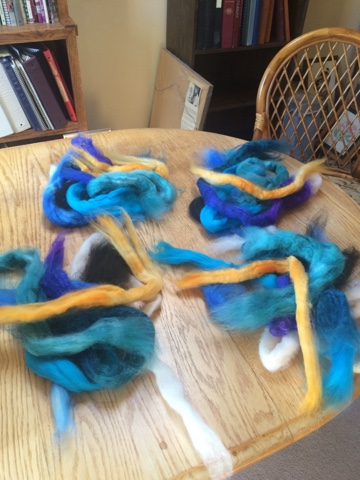 I selected about 4 ounces of fiber and I divided it into four groups since my drum carder is pretty full with just 1 ounce of fiber.  I'll card it tomorrow. 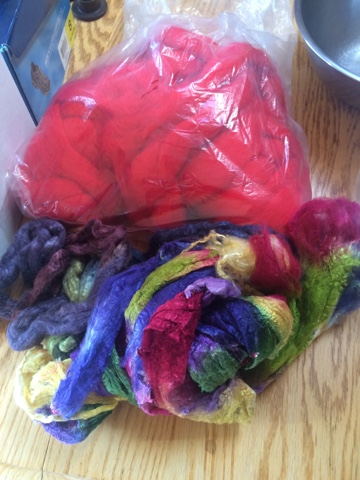 Next time I think I'll just use these two instead of so many short bits.  The bright stuff is felted silk that a friend gave me.  She dyed it but didn't want to fool with it so I'm going to fool with it instead. 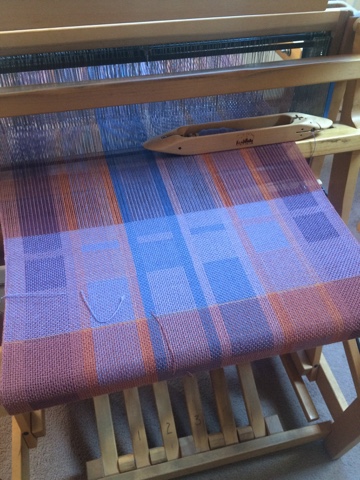 I'm weaving a set of dish towels on Maudie Mae - two more and I'll be done with this warp.  Arthur still just has the sample warp that I put on in Reno.  Maddie found my balls of weft yarn for the sample and hid them both, but I found the second one on Wednesday when Laura was looking at my studio space - clever cat. 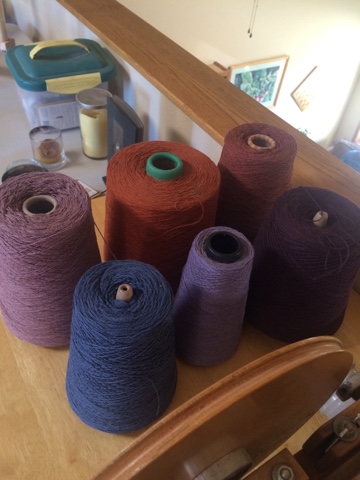 These are the "dusk" colors I'm working with and while I'd like something brighter next time I still haven't placed a yarn order so will have to do another muted palette, yet undetermined.  There's still too much to do to spend much time in the studio yet.

Sunday marks one month in our house and we've settled in quite well.  Now it's about the details, like hanging pictures.  I picked up the reframed prints from Michael's yesterday but when I got them home, was disappointed to see that three of the four mats had been mismeasured.  I am meeting son Matt tomorrow afternoon to look at bathroom tile and since the place is near Michael's will take them back then.  I've been really looking forward to hanging them in our nekkid bedroom so I'm  pretty disappointed. 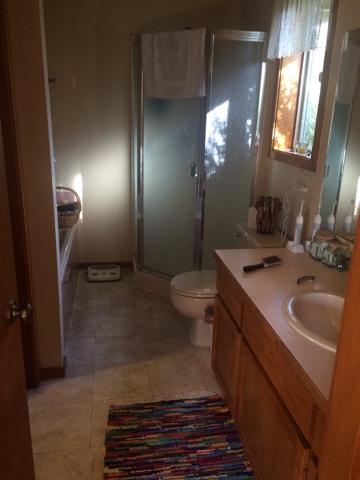 Speaking of disapointment, this is the master bath.  Ian calls the shower the "time machine" from the movie.  It's the smallest shower I've ever used and Melissa said it's like the one in their RV.  To the left of the scale is a short pink spa tub.  The counter is only 29.5" high so you have to bow to the sink to brush your teeth.  Matt has plans to tear this out and make a real bathroom, hence the tile shopping. 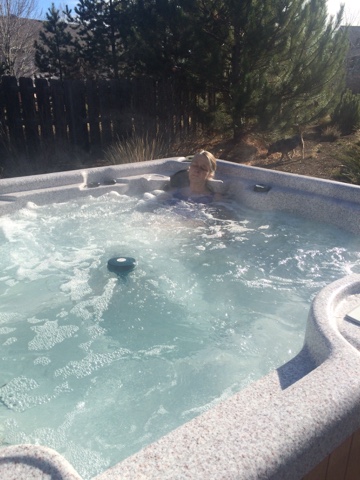 The hot tub was serviced Monday, drained and filled.  Ian had his very first hot tub experience in his life on Wednesday while I was at the guild meeting.  I've used a hot tub a half-dozen times in my life and we've never owned one so this is new new new.  The corner seat has neck jets that pummel my shoulders and lower neck.  It feels great, though I had Ian turn down the temp as I was getting cooked.  My old bathing suit is going to require replacement as it's pretty worn out, like me :)

First hot tub experience EVER?!? Sounds like you two have some partying to do together! ;-) Jealous of Laura's visit; I wanna come!

We have always dreamed of having a hot tub. I always thought it would be fun to use one at night looking at the stars and relaxing. Bathroom remodels are no fun but it looks like one is needed. Long time ago I lived in a house that had a shower like that. I could barely turn around and it did seem like when the door closed I would be transported to another time! Your towels are pretty and I love the soft colors.

Glad you are having lots of fun with fiber. I just got a blending board and am looking forward to have great fun with it.
Gene would be extremely jealous of your lovely hot tub.

Your fiber groups sound great!!! How fun that you got your yarn spun so quickly! Enjoy the tub!

Oh my goodness, you've moved!!! Which I know you know, and I know all your regular readers know, but since I do zero regular blog reading these days, this is quite the news to me!

I scrolled back through some of your posts about this and am really wowed. Very happy for you too; it seems like an excellent change for you.

My news is that Critter Tales will be out very soon! That's exciting to me. I will need your new address so I can send you a copy. :)

Even with all the goings on, you've gotten so much accomplished! I'm impressed!

Please post a photo of the finished scarf warp. I love the colours you chose!