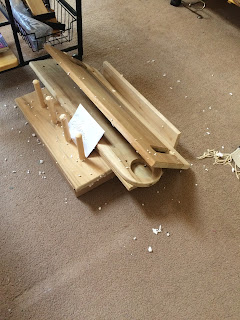 I ordered the weaving bench that Theresa Davies said that she bought and liked.  It's made by Janet Fox, a woodworker in Houston, whose Etsy shop is called Handywoman.  Unfortunately the extreme cold caused the Styrofoam to shatter so I had to clean that up before I could begin assembling my bench.  And you know how that stuff is, full of static and clinging to every surface. 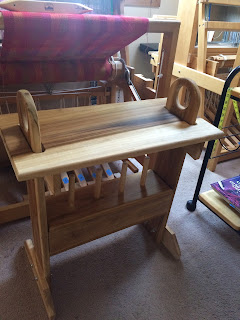 The poplar she used is beautifully grained and I was pleased by the ease of assembly.  I was also pleased by the price tag - $165 instead of the Schacht bench at $350, though shipping was free.  Still it's about half the price and half the size.  I wove on it for a couple hours today and think I'm going to like it.  It does rock a bit but she says in her instructions that it will.  The feet are there for stability. 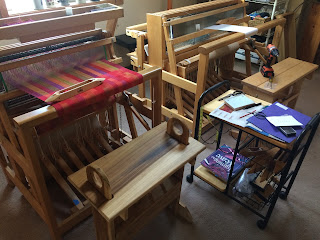 It's certainly nice to have a bench for each loom again.  I wove on both projects today which I'm more inclined to do when I don't have to move a bench. 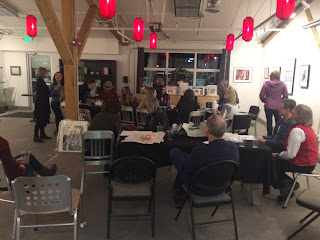 Ian and I went to the potluck/party at A6 Sunday evening.  It's a small group because membership is about 30 though Dawn, the director, says that has increased thanks to the new location that brings in more foot traffic.  Afterwards we did a print exchange.  I was reluctant to participate since I'm a beginning student but was encouraged by my instructors so I did. 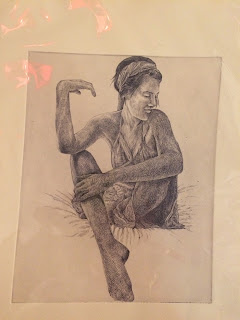 Some poor person got my student print and I got this astonishing solar print from Jeannette, who was my first instructor.  It's really lovely and Ian wants to get it framed though we're out of walls so something else will have to come down. 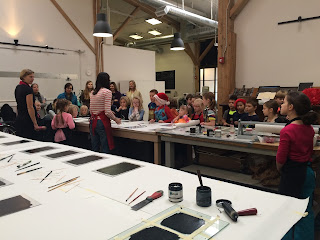 The next morning I went in about a half hour early for my volunteer shift and helped Dawn ink the plexiglass plates for a school visit.  We had two tours of 2nd/3rd grade students - 26 the first time, 24 the second.  Each were given the opportunity to make three prints. 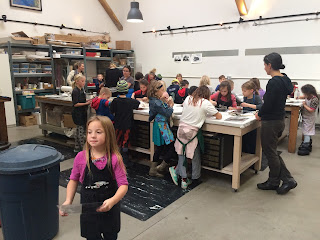 We had a space of about 45 minutes before the bus rolled in with the second group.  We took a lunch break then Jane and I cleaned up from the first tour and inked the plates again. Dawn instructed the kids about positive and negative space and how to remove ink to make a picture.  Most of the children were imaginative and bold though a couple were so afraid of making a mistake that they couldn't bring themselves to remove much ink in spite of being sent back to do some more work. Though disappointed they still had fun. 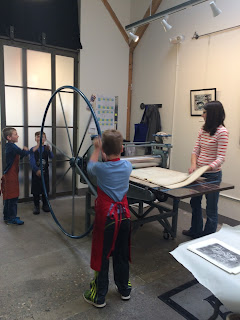 All of the children loved running their plates through the presses.  The large press was a favorite with the boys who stood at either side and spun the wheel. 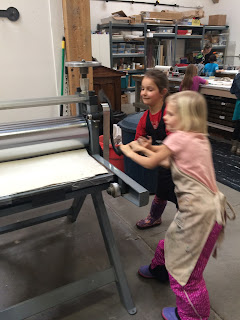 I facilitated printing at the smaller press which does require some elbow grease.  For the smaller children it took two to turn the handle.  They were like eager puppies every time we stopped the press and I flipped back the felts and newsprint.  Time for the big reveal!  I had fun though wouldn't want to do that too often as I don't love standing on concrete for five hours. 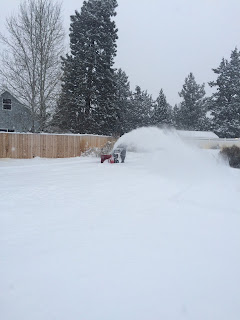 Based on the forecast Ian went to Lowe's yesterday and bought a 24" Troy Bilt snowblower.  This is wetter than our Nevada snow which he always managed with an ergonomic shovel.  Not any more!  We have over a foot of snow right now and are supposed to get another 5" before morning.  I don't think we're not going anywhere for a few days.
Posted by Sharon at 5:39 PM

I've read your blog for several years and enjoy seeing what you are creating. I know how it is with soap making! I used to sell mine at a local farm stand before it closed and loved the early years when I was experimenting with all different oils, but now I just get the job done so I can have soap for our family.

I am also a spinner, knitter and beginning weaver and work as head of circulation at a library. I enjoy seeing what you are reading as well.

Wishing you and your family a happy holiday season.