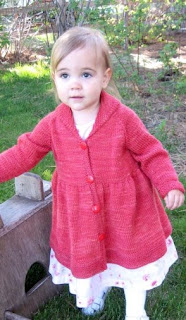 I finished Olivia's "Girl's Victorian Coast" from the KnittingPureandSimple pattern of the same name.  In my haste to finish and ship, I neglected to take photographs.  This is from Diane's website 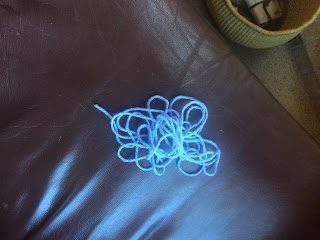 I made it in size 4 which used almost exactly three skeins of Plymouth Encore.   I bought five skeins so have returned two to Yarn Barn of Kansas for store credit.  This is all I had left!  Olivia's mommy chose the color which is a good thing because I would have instinctively gone Bright! 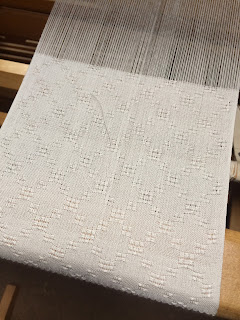 I finally got the huck lace lashed and loaded.  I love it when I have something like this.  Life has gotten really hectic of late but if I have ten minutes before I have to leave, I can weave on this and it always makes me feel better. 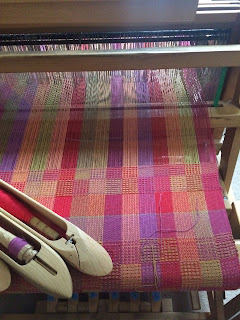 On the other hand, I haven't gotten any enjoyment from the Crackle towels I'm weaving from the September/October 2016 issue of Handwoven.  Progress is painstakingly slow and full of errors.  I started on the second towel and only got a couple of inches before I had already thrown an error.  I'm having to change treadling sequences every inch and juggle three shuttles.  This has tied up all my end-feed shuttles and I have to share one between this and the huck project.  I decided to unweave to the hem and see what would happen if I just used one shuttle. 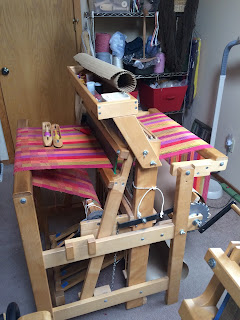 The colors on the loom are so pretty.  It's hard not to get enthused when I see them - until I sit down and get to work. 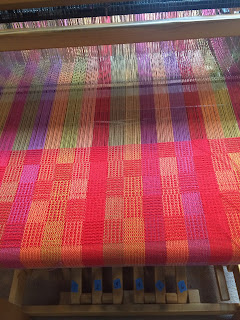 I discovered that I actually was having fun with a single shuttle though I'm still struggling with the four treadling sequences and the "pattern 1, pattern 2, tabby 1, pattern 1, pattern 2, tabby 2" sequence which changes at the same time as the treadling changes.  So far I've only made one error and am glad I didn't go with my first instinct and cut the mess off the loom.  The last two might actually be good towels.  At least I have learned something.  I've learned that three shuttles are not for me.  Trying to keep the threads untangled and free them from catching the apron rod or breast beam was just wasn't my cup of tea. 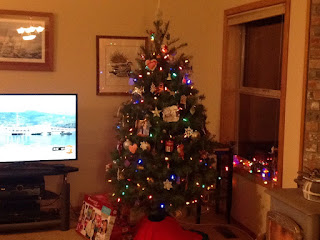 Maddie has made a little nest for herself with the gifts for our Angel Tree girl.  Her requests were so sweet and simple that it brought tears to my eyes.  I got a great winter coat for her on sale at Macy's for $20 so was able to add in a couple of adorable t-shirts too.  I need to turn everything in soon and boy is Maddie going to be sad.  Actually, she'll just turn her attention back to making toys out of Christmas decorations. 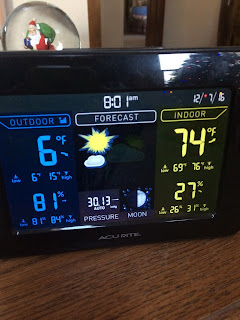 We've just had a cold snap over the past 36 hours which has been hard on Sammie.  She puts off doing her business outdoors for as just long as she can.  And just like that, the cold snap has ended with a high of 40 and rain predicted for today.  You know what that's going to mean for anyone driving after the sun goes down. 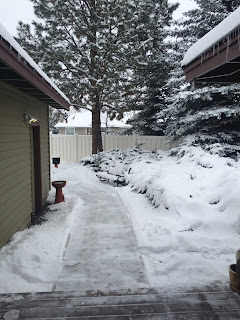 It snowed all day yesterday for a total of about 8" before it stopped.  It made for an interesting drive to my A6 studio volunteer shift yesterday afternoon.  Fortunately for me Bend is pretty diligent about plowing the streets so the worst of it was our residential roads and that was pretty entertaining even at 10 mph.  This is my last evening shift and I'm moving to Mondays at 10:00-2:00.  I need to go in this coming Monday at 9:30 for a school tour.  I'm looking forward to it.  Kids get so excited about print making - it's fun.

That coast is adorable! I also love the huck lace, but can definitely see the allure of those luscious colors.