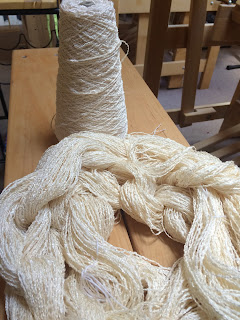 Last week I wound five warps for a warp painting workshop next Friday.  We are only supposed to bring four warps but after I finished this one, cone from origins unknown and person not remembered, I had cut out six knots and was having serious misgivings. 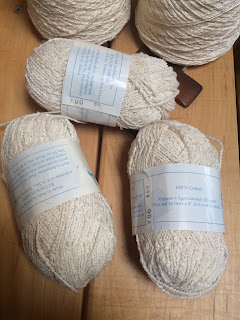 I dug through my stash and came up with these three balls of cotton knitting yarn, also "donated."  It's 100% cotton and a little bit stretchy for weaving, but it's a cellulose fiber class.  I wound a back-up warp just to be safe. 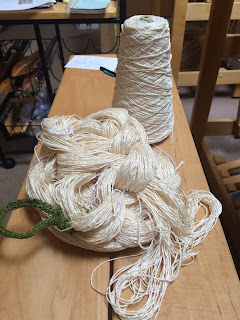 This is another rayon/cotton novelty yarn but without the texture.  A additional warp is already in a baggy, three 3" bouts of undyed Tencel to be painted. 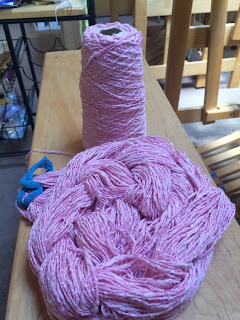 I bought this cone of Crystal Palace for a $1 at the Guild "Weft-Over" sale last summer.  Liz Moncrief is the teacher and she suggested that one warp be already dyed, pastels preferred.  The yarn is 44/40/16 viscose, cotton and polyester, imported from France.  I suspect this cone has been around for quite a while - it came from the stash of a retiring weaver..  I'm really interested to see if there's a swan in this ugly duckling. 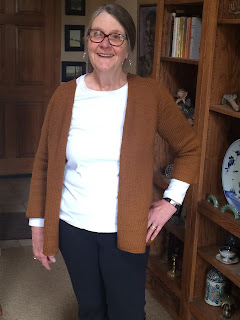 I'm happy to report that I have finally finished my NCAA sweater.  The pattern is called Quick Sand - click to go to the Ravelry link.  The gauge is 15 st. = 4" but I used Cascade 220 on size nine 9 needles and still got 16 stitches so went up a pattern size.  I like it so much I bought the designer's pattern called Fine Sand, gauge 22 st = 4" and have already started. 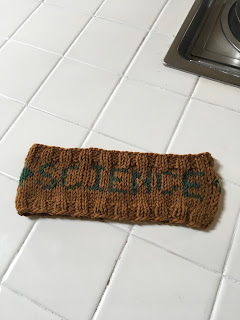 And I quickly knit this headband for the March for Science next Saturday on Earth Day.  The pattern is also on Ravelry.  Click here for the free pattern. 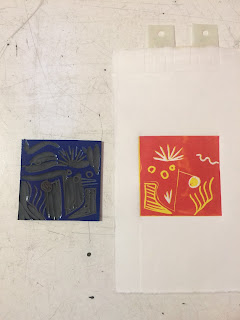 Last night was the first class of four on Color Reduction in block printing.   We used these 3" square pieces of Gomuban, (a malleable rubber tile) as an introduction to the technique.  First we carved out the white so that when the plate was next inked with yellow, the white would be preserved.  First it's yellow, then red and then blue, light to dark.  We carve on the block four times to get our final print and each "incarnation" gets inked and run through the press on the same paper, three passes through the press. 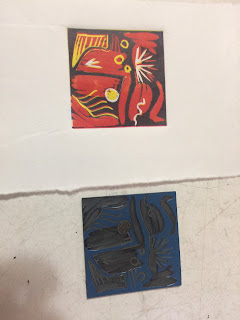 The blue over the red produces the appearance of black and is what makes it pop.  I really enjoyed the process. 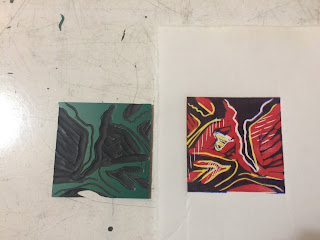 I seriously didn't know what I was just doing - carving with no plan and on the last carving I got a bit over-zealous and carved away a part of this soft plate - oops.  I'm not as fond of my second try and see that I'd like more structure.  Tomorrow night we begin the first of three sessions to carve and print one print on 8 x 10" tiles.  We can chose Gomuban or Sheena wood and I've opted for the wood.  I've already got my sketch ready.
Posted by Sharon at 2:26 PM

Love the sweater. I have the two patterns you mentioned plus Saltwater and Jet Stream.
Gloomy and wet here too. Spring in OR, a true slug fest.

I can't wait to see your dye project results! Aren't you glad you had some stash to use!

Warp painting is a lot of fun and give some interesting results. One gal in our guild does such cool things with neat colour blocking and diagonal slashes of colours, which weave up to make beautiful scarves. Have fun with that one! The sweater is lovely too.

I have the two patterns you mentioned plus Saltwater and Jet Stream.
Gloomy and wet here too. Spring in OR, a true slug fest.