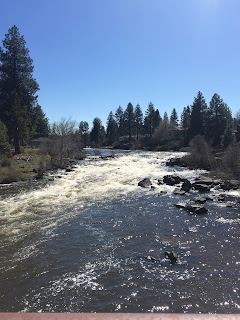 We paid a visit to First Street Rapids Park last week on one of two sunny days.  Bend has 72 parks and we're going to try see as many of them as possible this year.  One down. 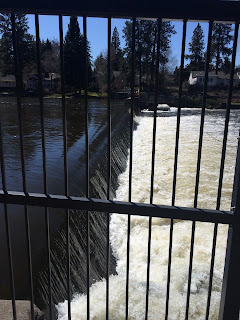 The river has signage long before rafters get this far.  They have to get out and portage along the trail that we were on, nicely paved and wide. 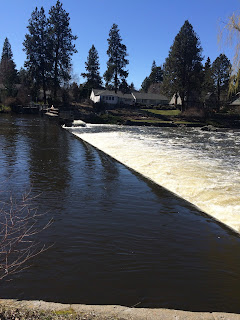 It's just a placid river until it isn't! 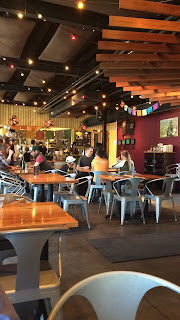 We treated ourselves to lunch afterwards at Spork, a family-friendly hipster restaurant serving Mexican/Asian/fusion cuisine.  Their original place was a food truck, hence the name. 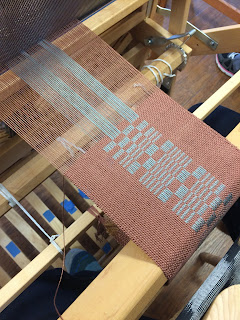 The supplementary warp workshop last weekend was taught by Linda Gettman as part of our weave/study group.  We came with our looms already warped with the ground warp and the pattern warp in a baggie.  We all had the same yardage of  5/2 mercerized cotton so only our colors were different.  It was a (very patiently) led group exercise. 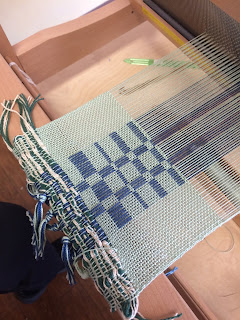 Actually the other thing that varied was how many times we treadled the two sequences of the Monks Belt draft. 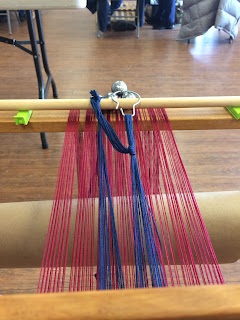 This is a really fiddly process so we had to have extra bits like the dowel across the back and above the ground warp.  It's bungied onto the back beam with the bag clips inserted between them to keep the two different warps from intermarrying.  My supplementary warp was weighted with 18 ounces of fishing weights, 9 ounces on each bundle and it absolutely needed that much weight.  Obviously I hadn't intended to ignore it this long. 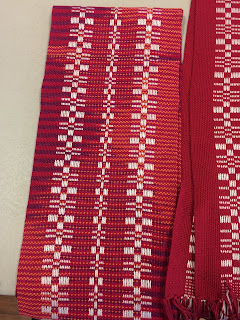 Linda took a workshop last year on this subject and what we did was based on her experience.  She has since then branched out.  These scarves are inspiring. 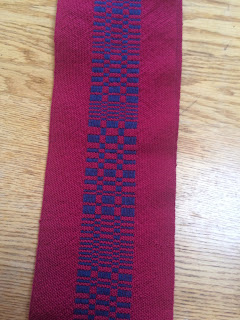 This is mine after being sent through the washer and dryer.  The entire thing was a sample.  This is my go-round with Monks Belt and while I like the appearance of the blocks, they've got long floats that could easily snag.  I don't expect to try this draft again but I absolutely will try supplementary warp again.  There are a lot of options!
Posted by Sharon at 3:49 PM