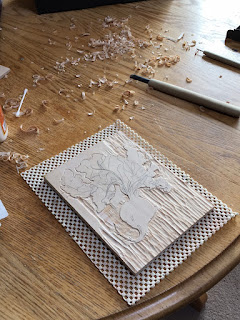 I've started a series of root vegetables, or at least I'd like to think this is going to lead into a series.  I'm doing my best to juggle printmaking and weaving and not getting very far on either front. 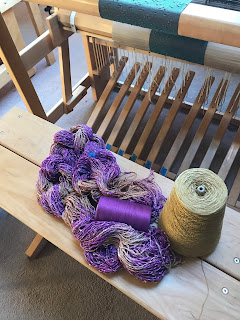 Now that Maudie Mae is cleared of her last project, I've also started to weave the warps I dyed in the workshop, and since I think this is the worst one, I've started with it. 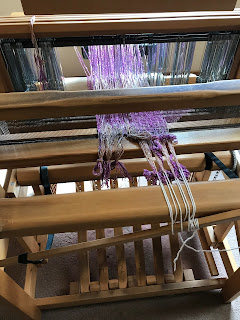 And anything that could go wrong, did.  I spaced setting aside a couple warp threads to use in event of breakage and the first thing I got was a broken warp.  Great I thought, I'll just shift everything to the right, and it went downhill from there.  Don't ask.  The repair took hours and I ultimately had to put the left threads onto the lease sticks and rethread those heddles.  I cannot tell you now many times I came close to just cutting it all off thinking of my mother's old expression - throwing good money after bad, only for me it was throwing time. 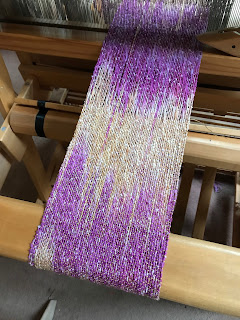 The loosely spun cotton was badly battered in the group buckets and the front ends were in pretty bad shape from me pulling them free from the knots. When I finally got the warp all set I advanced it and cut off about 15" so not only will these be skinny scarves, they'll also be short with just 4" of fringe.  The good news there is I won't have to twist it. 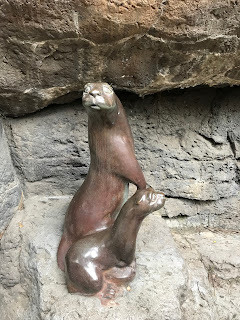 We just said goodbye to Ian's old friend John who was our first visitor of this summer, well almost summer.  Last year we took visitors to the High Desert Museum five times so this year we joined.  It was still too cool for the otters to be out and cavorting so these were the only ones we saw.  Attendance was good in spite of the drizzle. 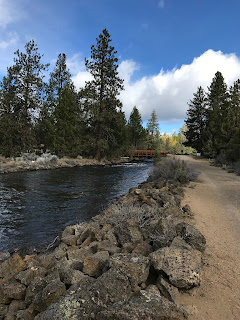 It's really a pleasure to walk on the path along the irrigation canal and I'm trying to take advantage of it as often as I can. 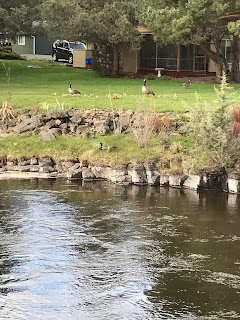 Before long these geese will strong-arm their way into possession of the paths, to say nothing of the copious goose poop and it looks like there are going to be a lot of poopers very soon.  Click for big to see how many! Plus you really need a dog on a leash to avoid conflicts with the possessive males. 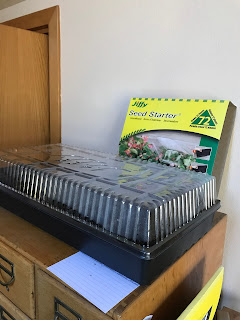 Like everyone else here, I'm struggling with spring fever and learned from last year that if you plant too soon, the last frost will get the last laugh.  So I hope I'm demonstrating patience by planting seeds indoors:  heirloom cucumbers, basil, tomatoes and next week I'll add zucchini seeds. 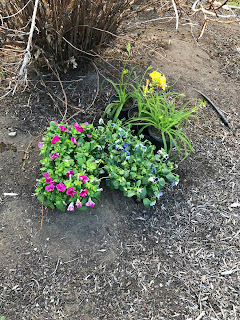 I swore I wouldn't buy any plants until June, but that was before I went to Costco and saw these pansies, day lilies and petunias, and against my better judgement, they are all in the ground. 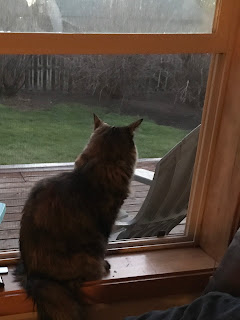 I'm not the only one with spring fever.  Maddie loves sitting on the sill closest to the bird feeder.  This is the closest she'll ever get to it and she seems to be okay with it. 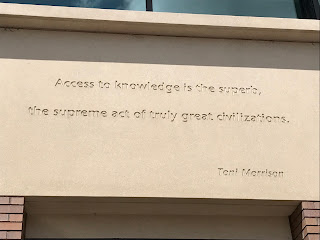 I ran down to the library after my art class this morning for some reference books to help with my project.  For whatever reason I looked up and noticed that there are different quotations on the building.  My favorite:  "Access to knowledge is the superb, the supreme act of truly great civilizations."  A man entering the building at the same time as me also stopped to look up and said - How about that?  They even used a living person!

Your cool spring weather has made its way east!!! I understand about early planting...your seed starters are a great idea. Enjoy all your new projects (the scarf is looking great, BTW!)

I love seeing you so settled and involved there! Still wish we were closer to one another....

I understand your frustration with the painted warp, but I gotta tell ya, it looks beautiful on the loom!

All being said, that warp looks great on the loom. It's been unseasonably cool and so darned wet here. Nothing is in the ground here because the ground is too saturated to till. I didn't even start anything this year besides a few dye plants.

Our library is a teeny, tiny room in the community centre complex. It has a little sign with an arrow pointing to the door, which says library, lol. Your library is inspiring. I'm happy that ours has books though and a much larger circulation system to reach out to, than the little space holds books.

.your seed starters are a great idea. Enjoy all your new projects (the scarf is looking great, BTW!)