Not enough hours in the day! 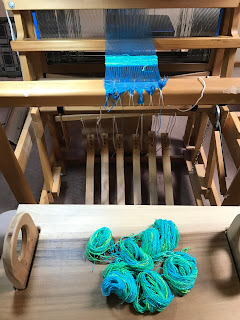 I was really disappointed that the yarn I dyed in tidepool colors in our painted warp workshop was pretty much unweavable.  The slubs got caught in the heddles and I cut it off in exasperation after completing the first scarf. 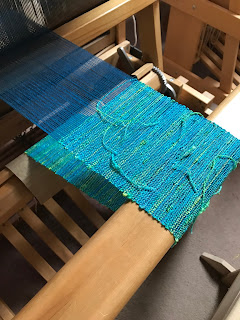 I put on a 2 1/2 yard Tencel warp and used the pieces as weft.  I figured nothing ventured, nothing gained. 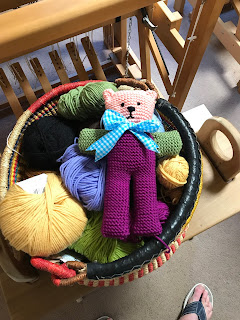 I've been rather stalled on the knitting front since I finished my NCAA sweater so am playing around with knitting bears from this basket of various colors of Cascade 220 superwash.  One bear down, I haven't decided how many to go.  The pattern is available here. 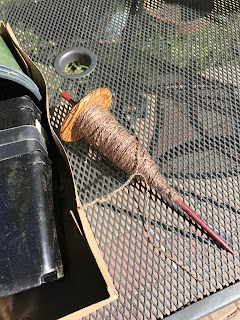 I've been stalled on the spinning front for longer than I care to admit but our guild program this month was on drop spindles.  I had a spindle with some wool/silk on it and it's been on it for at least a year.  I picked it up and started trying to spin again, to the point that it was full.  I have it plied and am working on the second half of the roving which should yield this much yarn again.  I won't mess up my head trying to figure out what to do with it.  Once it's all spun I'll calculate yardage with my McMoran yarn balance and try to enjoy myself until then. 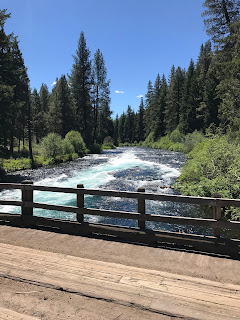 Our friend Petey is visiting us this week so we've been doing some touristy things. The Metolius River is reputed to be the prettiest river in Oregon so we drove up yesterday to check it and it truly is spectacular. 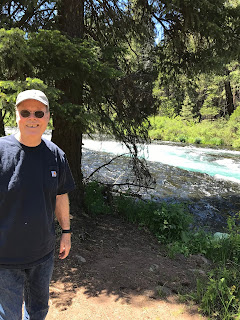 The minerals in the water make it this spectacular color.  This was at Wizard Falls next to the fish hatchery.  The river is fly fishing only, catch and release. 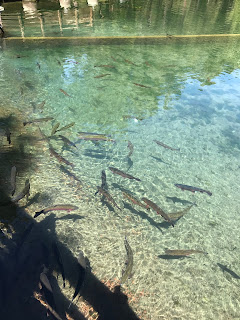 The hatchery was built in 1947 and has dozens of concrete ponds, some no longer in use, and raises both trout and salmon. Water is piped from the hatchery ponds into this settling pond where the sediment settles down and brings the water into purity standards before being released into the river.  All of these fish are escapees from the ponds. When we walked up, people were leaning over the rails to watch the fish and I was reminded of Fanny Bridge in Tahoe City. 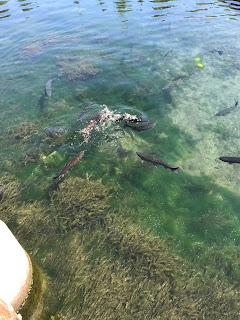 I took this picture after Petey tossed in the handful of fish food he bought from one of the vending machines.  These guys are huge. 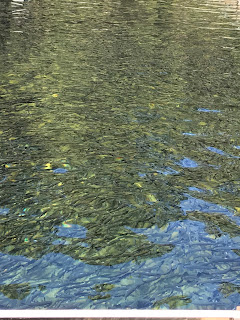 This pond was the baby fish, ready to stock streams and lakes.  The water is dense with them as best seen in the foreground. 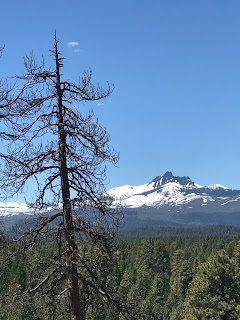 We wanted to get photos of the Cascades but the forest is so dense up there that it was just about impossible, plus the traffic was pretty heavy at the start of a holiday weekend.  The only picture I managed to catch was this one of Three Finger Jack 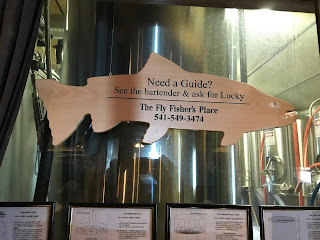 On the way home we stopped in Sisters for lunch at the Three Creeks Brewery.  I got a kick out of this sign on the window looking into their brewery.  I'd recommend the fish tacos and Ian gave the Thai Chicken Rice Bowl two thumbs up. 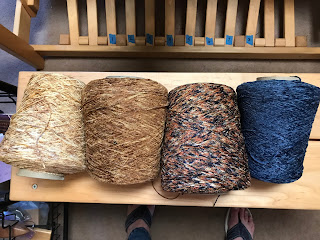 My Yarn Barn order of 8/2 cotton arrived along with the chenille I got from their Mill End Club. I've never woven with it but that's about to change.

tushar soni said...
This comment has been removed by a blog administrator.
12:09 AM

That bear looks like the ones I knit for a friend to take to Africa when she goes with Doctors Without Borders. I have some knit, but not put together, because they are not going this year